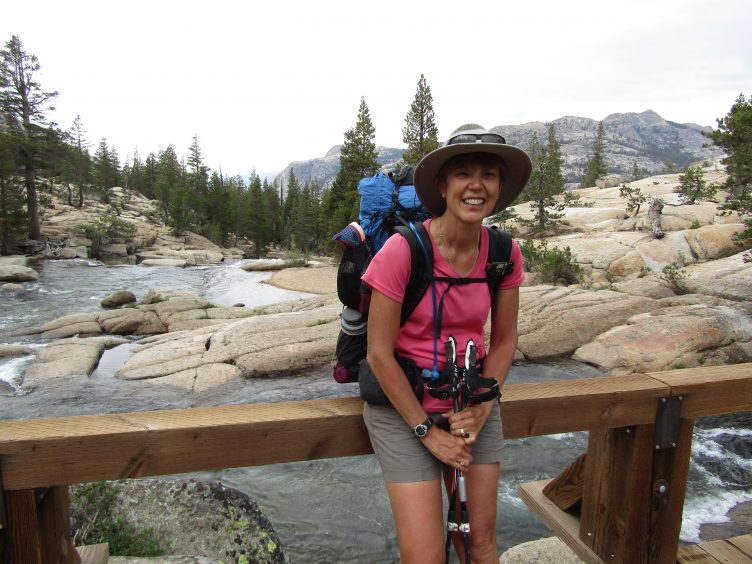 Once you’ve decided which direction you’re traveling in and where you’re starting, you’re ready to dig into the planning a section hike of Tahoe to Yosemite on the PCT (Pacific Crest Trail).  See “Tahoe to Yosemite PCT Section Hike-Permits and Planning” for additional information.

15 Day Itinerary-Tahoe to Yosemite on the PCT

When Steve examined the locations of campsites with reliable water sources, it appeared that they were about 10 miles apart in many cases. That wasn’t always the case when we had boots on the ground as seasonal creeks come and go. Some water sources were not easily accessible and some had camping restrictions. I noted that several “official,” accepted or obviously well-used campsites did not follow LNT (Leave No Trace)  principles. Some were located practically on a trail or at the very edge of a water source. I accepted the fact that the land was less than pristine wilderness in national forests where grazing was allowed. It was hard to get worked up over campsites that weren’t ideal from an LNT perspective when cow patties blanketed the land.

While we hiked an average of 10-mile-days, they ranged from 5 to 14.6 miles per day. We ended up hiking only five miles the first day since traveling from Lee Vining to the trailhead took half of the day. We elected to only hike five miles the next day to preserve our itinerary (meaning that we split our first 10-mile segment into two days). The second day was a bit too short but it was a nice way to ease into the trail. Even though the trail is relatively low, I’m sensitive to the altitude at around 10,000 feet so it was a good strategy for me to have two easy days to start. If you’re starting in the early morning on Day 1, you can easily combine the first two days into one.

Most PCT hikers were covering 20 miles a day with a minority in the 30-mile a day range. A few were doing 15 miles a day so presumably they found the right combination of water and campsites at those intervals.

Here is our itinerary for a 15-day hike with a nero (nearly zero) day in the middle. Because fewer landmarks on the trail are named (in contrast to the JMT) we often used PCT miles to note our location. These mile numbers correspond to the PCT mileage on Halfmile’s maps. These numbers increase as the PCT progresses north.

We started on August 22, 2017. This year was notable for the near-record-breaking snowfall in the winter, which made for an unusually wet summer. Seasonal streams were active longer than usual and we had a number of snowfields to cross after Sonora Pass. We had originally planned to start in late July but the high water in the rivers and persistent snow caused us to delay a month.

The SOBO (southbound) route goes through six wilderness areas, in this order: 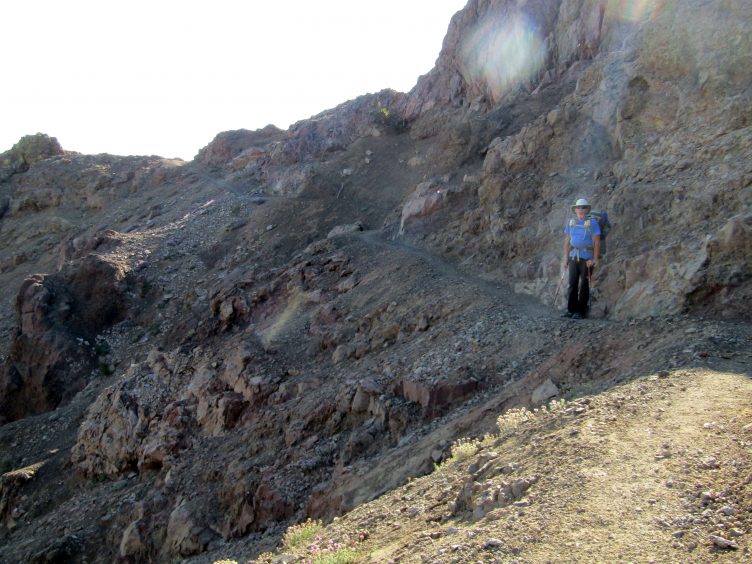 The trail gets a little skinny at times (Day 5).

Halfmile (the trail name of a very helpful individual) offers a set of free downloadable and printable PCT topographic maps. Each section is comprised of several maps.  Tahoe to Sonora Pass Highway is California Section J, while Sonora Pass to Yosemite is California Section I. The PDFs can be loaded onto a mobile device and printed onto paper. I don’t feel comfortable without paper maps but many of the PCT hikers only use apps (described below).

This is an excellent resource that covers this section of the PCT in detail: Hiking the Pacific Crest Trail: Northern California: Section Hiking from Tuolumne Meadows to Donomore Pass by Philip Kramer (Mountaineer Books).

The Pacific Crest Trail Data Book (Wilderness Press) contains lines of text that describes detailed milestones such as towns, resupply locations and water sources in a small booklet. This used to be a critical resource but apps that provide the same information have largely supplanted the data book. I bought this but didn’t use it.

There is a series of PCT guidebooks. Pacific Crest Trail: Northern California (Wilderness Press) covers Tuolumne Meadows to the Oregon border. I don’t have this book, but my copy of The Tahoe Sierra by the same author, Jeffrey Schaffer, is excellent and well worn.

Far Out has a paid version of an Apple and Android map app of the Pacific Crest Trail.  It’s a traditional map app that displays a topographic map and identifies water sources and campsites. A valuable asset is the crowd-sourced information

CalTopo is a free computer application that allows the user to create routes and waypoints anywhere in the U.S. The route can be exported into a number of free and paid map apps such as US Topo Maps (by Atlogis) and the maps can be printed. There’s a bit of a learning curve but it’s a powerful application. 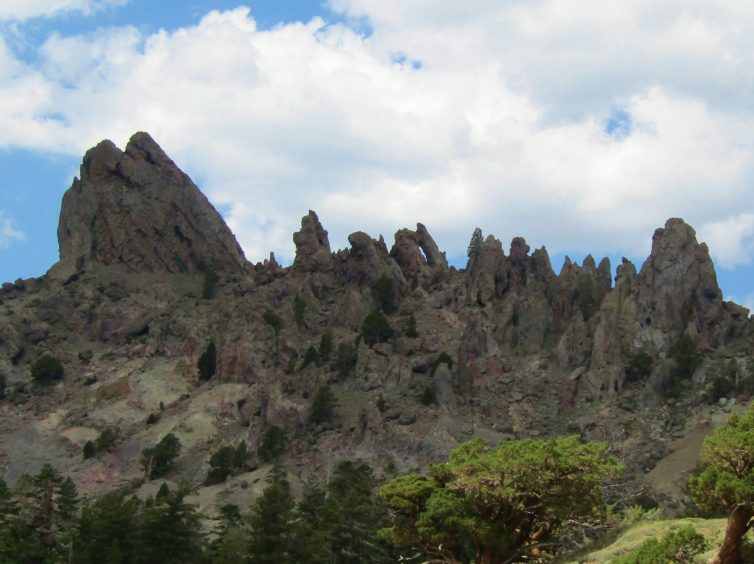 If You Hiked the JMT

After completing the John Muir Trail (JMT), many hikers seek similar trails. This 150-mile PCT section is shorter but is a natural progression since it ends near the start of the JMT. Those who are looking for something closer to the 211-mile length of the JMT can look at alternative trailheads on the PCT to lengthen the trip. Suggestions include starting further north, such as Sierra City or Donner Pass, or connecting part or all of the Tahoe Rim Trail. Another option would be to continue south through Yosemite on the Theodore Solomons Trail (TST). The partially maintained TST runs parallel to the west of the JMT. It starts at Glacier Point and ends at Horseshoe Meadow (some navigation challenges exist in the central portion).

Tahoe to Yosemite on the PCT is a beautiful section of the Sierra that shouldn’t be missed.

See “Tahoe to Sonora Pass” for my trip report for the first section.

See “Sonora Pass to Yosemite” for my trip report for the second section. 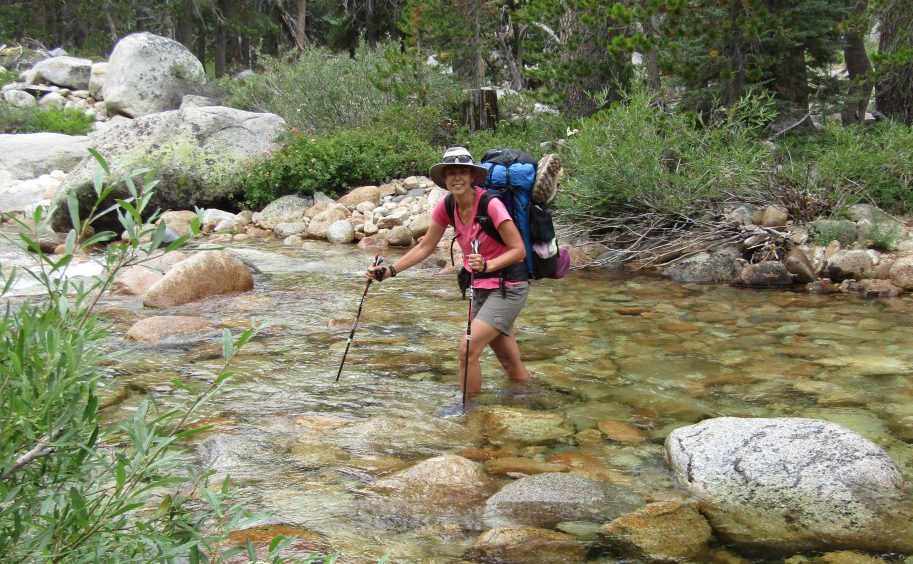 Rancheria Creek was mellow but can be deadly in spring (a PCT hiker drowned here a month before we crossed).