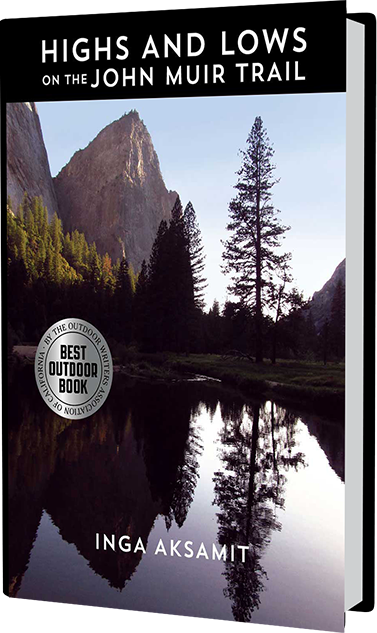 Highs and Lows on the John Muir Trail

The Outdoor Writers Association of California in 2016, is a lively account of one woman’s adventure on the John Muir Trail. It is a must-read for those who plan to hike the trail or anyone interested in the trail. Written in journal style, the author’s description of the majestic scenery, camaraderie of trail friends and challenges of the terrain are engaging and informative. Along the way hikers of all ages, but especially mature hikers, will see how she and her husband met challenges head-on, lightened their load, planned meals and managed daily logistics for more than three weeks on the trail. Written for those planning to hike the John Muir Trail, Sierra hiking veterans who want to relive the trail and armchair adventurers this is a story that brings the trail to life.

The Hungry Spork TRAIL RECIPES: Quick Gourmet Meals for the Backcountry (2019) is available in print and ebook. With more than 50 recipes, this book is a companion to the first Spork book, which focused on planning for a thru-hike, with an emphasis on recipes. You will find vegan and meat alternatives for most recipes and feedback from a fleet of backpacker trail testers is included. A guiding principle was to create delicious, varied meals with a minimum of additives using whole ingredients wherever possible. Dried ingredients can be home-dehydrated or purchased in freeze-dried form in most cases, depending on your style. Recipes are flexible and adaptable so if you have food allergies or preferences, many recipes can be modified to suit your needs. There are recipes from every major cuisine so it’s easy to have a lot of variety on a long thru-hike. Written by the author of “Highs and Lows on the John Muir Trail” and “The Hungry Spork: A Long Distance Hiker’s Guide to Meal Planning,” Inga Aksamit is a California-based backpacker who loves long trails and good food. Can’t decide which Spork book to get? If you’re planning your first thru-hike and have questions about nutrition, equipment and planning, get the planning book, “A Long Distance Hiker’s Guide to Meal Planning.” It has a dozen recipes to get you started. If you already know the basics and just want to go straight to recipes, get the Trail Recipes book, “Trail Recipes: Quick Gourmet Meals for the Backcountry.” Perhaps you need both! See this write-up in the Santa Rosa Press Democrat: Kenwood backpacker writes cookbook for those who love good food in the great outdoors. 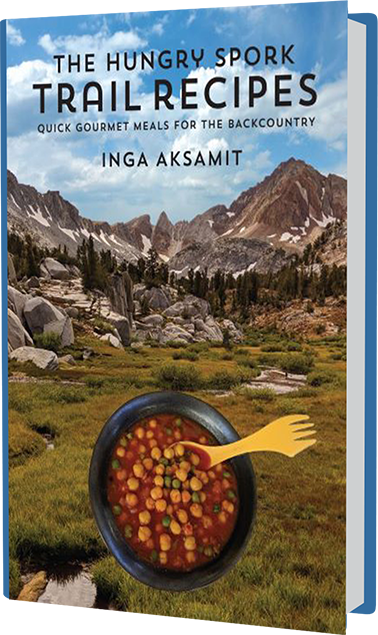 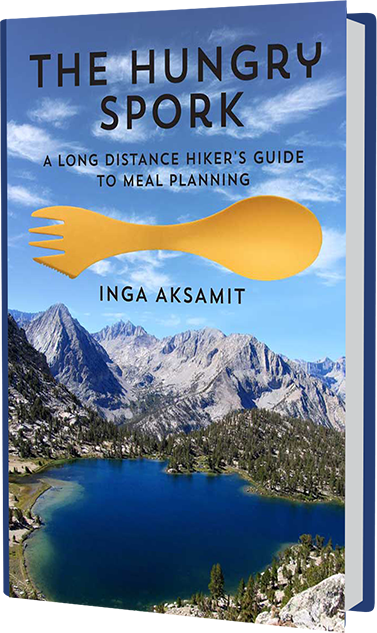 The Hungry Spork: A Long Distance Hiker’s Guide to Meal Planning (2017) is available on Amazon in print and e-book. If you’re going on a thru-hike, the daunting task of preparing food for a multi-week trek just got easier. Plan fast, wholesome, high energy meals with minimal additives and preservatives. The magic is that the prep work is done at home so these delicious meals can be brought to life on the trail with nothing more than a warm water soak. Mentioned in the New York Times! See reviews by Ray Rippel, author of “Planning Your Thru Hike of the John Muir Trail” and in Sierra Splendor.

Learn about how to prevent, recognize and manage altitude sickness while hiking the John Muir Trail (JMT), a long-distance, high-elevation hike in California. The 211-mile JMT starts in Yosemite National Park and winds its way south to Mt. Whitney, the highest mountain in the contiguous United States at 14, 505 feet. Are you familiar with high-altitude illness? Do you know the symptoms? Do you know what you should and shouldn't do? This guideline, written by two clinicians and a hiker who suffers from high-altitude illness, provides basic information about the illnesses triggered by the reduced oxygen content of the air at higher elevations and provides recommendations for how to avoid high-altitude illness. It is written for regular people with no clinical background in clear, understandable language. The guideline describes how the body reacts to reduced oxygen, provides tips to plan your trip to lessen your chances of getting sick from the altitude, lays out a sample itinerary and includes an extensive “frequently asked question” section. After reading this guideline you’ll be able to plan your trip to maximize success and recognize when members of your party might need more time to acclimate. Recommendations are backed up by science and clinical studies and have been reviewed by physicians who are experts in high-altitude medicine. Why should you read this guideline? All travelers to altitude are at risk for developing an altitude related illness. Symptoms of an altitude illness typically appear above 8,200 feet but can present at elevations as low as 6,500 feet. Altitude illnesses include mild to moderate Acute Mountain Sickness (AMS) and the more serious conditions, High-Altitude Cerebral Edema (HACE) and High-Altitude Pulmonary Edema (HAPE). Symptoms of altitude illness vary widely and can overlap with dehydration, exhaustion or other illnesses. Many symptoms of altitude illness can appear within six to ten hours of exposure to altitude. The most severe and dangerous forms of the illness may not appear for one to four days. Unattended altitude illnesses can be fatal. If the ascent rates suggested in these acclimatization guidelines are followed, hikers will be less susceptible to an altitude illness. Medications may help acclimatization or treat symptoms of AMS but are not as effective as a gradual ascent. The average JMT hiker will spend many days and nights at high altitude.The majority of the trail lies above 8,000 feet: oThe highest point on the trail is 14,500 feet on top of Mt. WhitneyoSix of the ten high passes are over 11,000 feeto The average elevation of the trail south of Lyell Forks in Yosemite, which is more than 80% of the hike, is over 10,000 feet.What does normal acclimatization look like? Most people can acclimate to high altitude if given enough time. The body responds in a number of complex ways. The major organs involved in acclimatization include the lungs, heart, kidneys and endocrine system. The person who ascends to altitude may find that even mild exertion makes them short of breath causing more frequent and deeper breaths to bring additional oxygen into the lungs. An increase in heart rate may or may not be noticeable. Less obvious are other physiologic changes such as less plasma volume, more red blood cells, diminished blood flow to nonessential tissues (e.g. skin) and enzyme changes that trigger other processes. When the body has adequate time to acclimatize, the physiologic changes work together to increase oxygen delivery where it is needed. Proceeds from book sales will be donated to organizations that support the John Muir Trail. 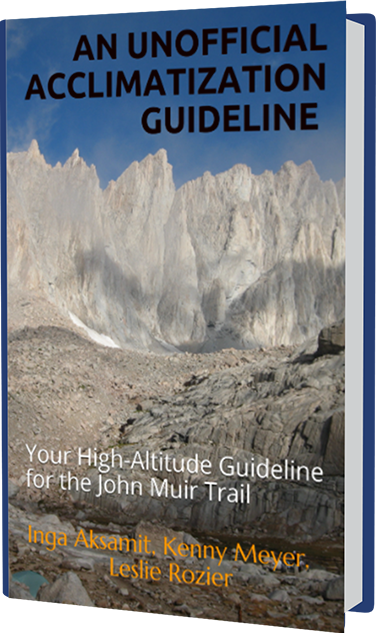