Geneva is a great place to get over jet lag with its walkable historic core, endless sidewalk cafes, glittering blue lake and fascinating glimpses into international organizations that reach around the globe. Its central location means that trains, buses and cars can transport you to magical moments in the nearby Alps or destinations in France, Italy, Germany and beyond without much trouble. 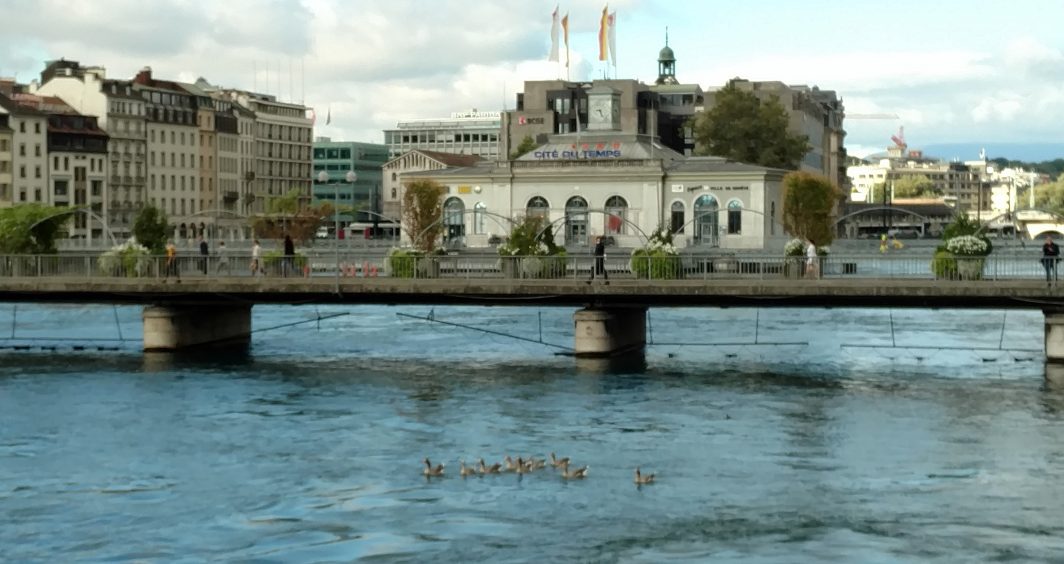 Switzerland is famous for its political neutrality so it’s no surprise that it is home to a number of famous organizations. The United Nations and Red Cross headquarters are located across the street from one another so an inspiring way to spend a day is to visit both.

My husband and I spent two days in Geneva recovering from jet lag prior to hiking the Tour of Mont Blanc. The first day we just wandered around in a fog, but the second day we were ready to engage with the vibrant city. From our base at the Ibis Genève Centre Lac Hotel, which is conveniently located in the city center, we were able to walk or take public transportation to many sights. 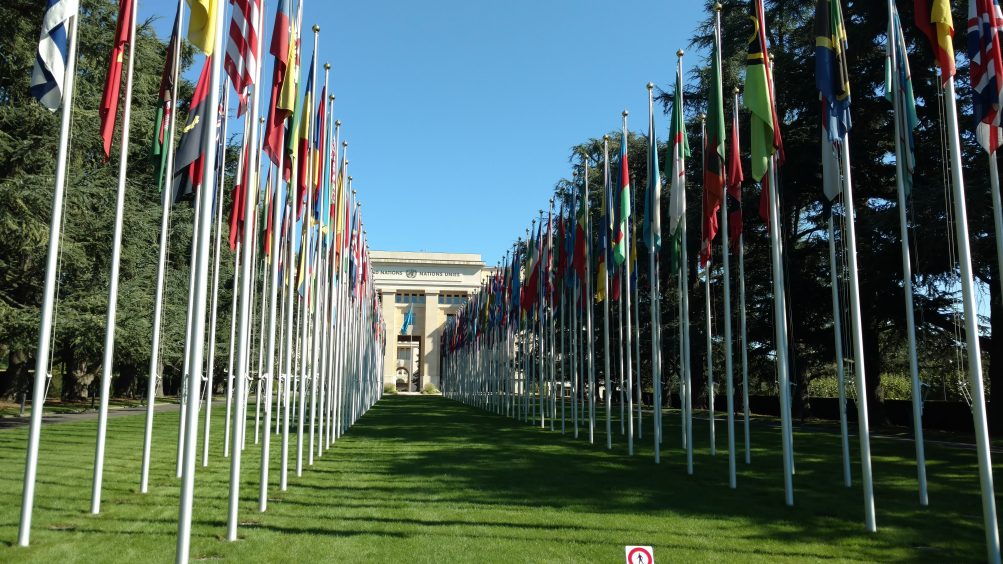 We availed ourselves of the convenient city bus system to get to the United Nations from downtown, arriving at an entrance around the corner from where the tours assemble. A guard at a side entrance directed us to the correct location at the Pregny Gate a short distance away.

I was unexpectedly moved by the tour of the Palais des Nations. The earnest young man leading the tour, with his fitted white shirt, crisp trousers and slicked back short hair, was multilingual, being an official interpreter for the UN. As soon as he ushered us into the Human Rights and Alliance of Civilizations Room, I felt the enormity of what the UN represents with its goals of fostering cooperation and peace among nations. Walking in the empty room, with the familiar curved seating arranged around the central dais that we’ve all seen on television, was sobering. Just thinking about the important dignitaries who meet in that very room and the decisions they make was cause for reflection. That there is even a mechanism to bring world leaders together in the range of committees that exist is phenomenal. They might not always achieve the desired results but that may be too much to ask of imperfect humans. I wanted to just sit and absorb what the UN stands for, but was worried we’d be ushered out to the next stop. I was pleased when our guide invited everyone to take a seat while he explained more about the UN. We sat in the back rows where the non-voting members, such as representatives of NGOs, sit during meetings. I was struck by the convex ceiling that was covered in psychedelic colors and wild shapes that protruded downward. Created by the Spanish artist Miquel Barcelo, the dome was created by spraying pigments from around the world onto the ceiling in a riot of color. Layers upon layers of paint, 100 tons of it, formed the stalactites to represent the contours and hidden spaces of the sea. The project took more than a year to complete. 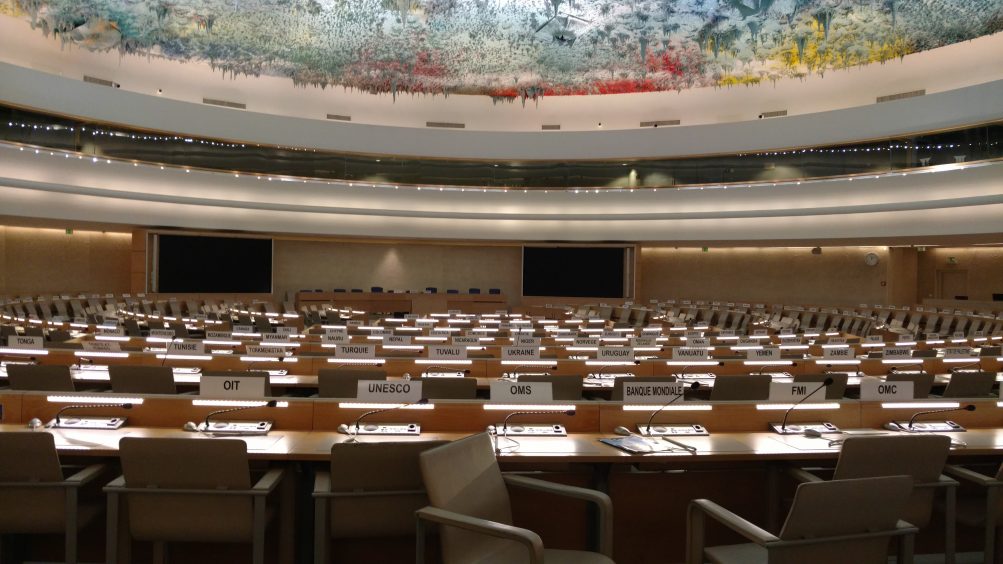 I was fascinated by a number of the facts our guide shared with us that demonstrated that nothing is left to chance when it comes to protocols. There are two official languages, English and French. That’s not surprising in this part of the world, but what is unusual is that the seating order alternates between the two. This means that the same people don’t end up sitting next to each other at every gathering. The United States, for example, would be in the U position one time and the E, for Etats Units, the next time. Also, the seating order always starts to the left of the dais, and one country name is selected randomly for each meeting. The person representing that country is assigned the nearest seat to the dais, with the rest falling in alphabetical order on the seating chart depending on the official language for that meeting. 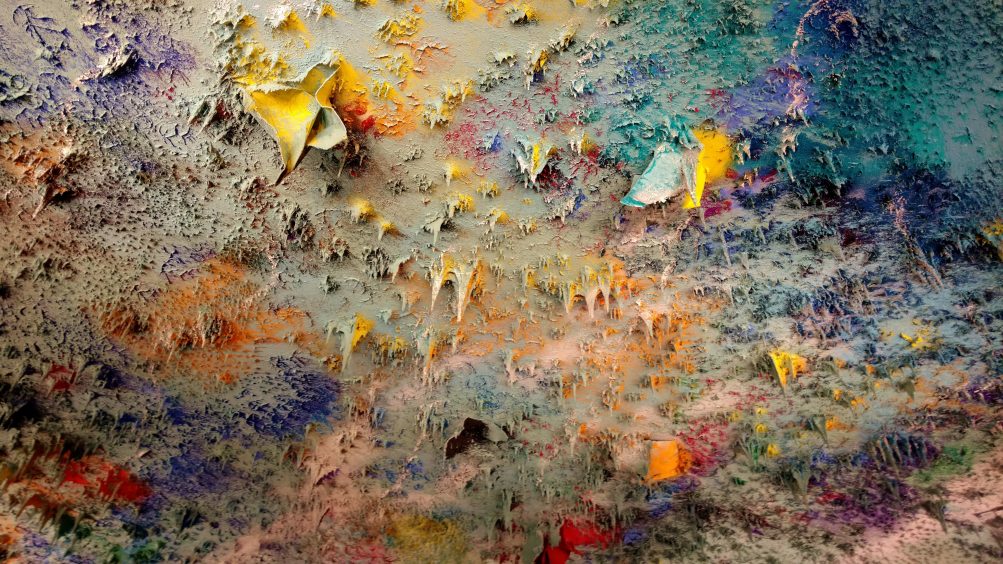 Ceiling of the Human Rights and Alliance of Civilizations Room

We were escorted through a large hallway with art that had been donated by various countries and learned some factoids, such as how a piece of Chinese art had a long set of stairs that appeared to lead toward the viewer no matter where they stood (it was true, I tried viewing the painting from all different angles). At the end of the too-short, one-hour tour we filed into the main Assembly Hall where the largest meetings take place. This room was plainer in terms of architecture but was awe-inspiring nonetheless. 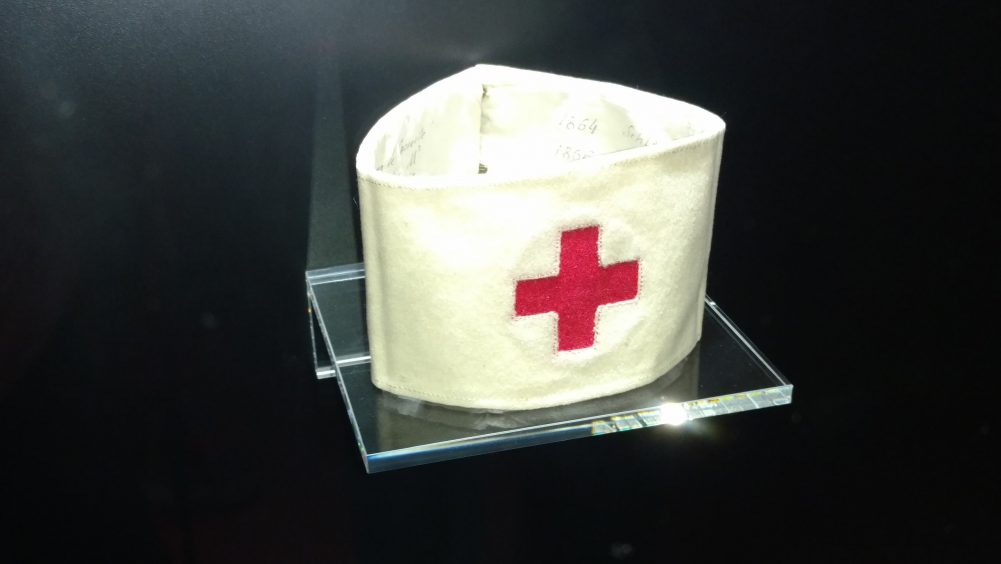 Across the street, on an imposing hill, was the Red Cross Headquarters. We climbed the stairs, realizing that we were suddenly famished. Luckily, the first building we saw was a large sunny cafeteria that offered a surprisingly delicious buffet of salads, cheeses, rosti (a Swiss potato dish) and assorted hot dishes. We enjoyed a hearty lunch that bolstered our flagging energy for the next round of sightseeing. Jet lag was catching up to us but we were determined to stay alert through the afternoon.

This was a very different visit compared to the UN tour, being a self-guided experience. We were given audio devices that sensed where we were in each room. Voices would appear in our heads via the earbuds, narrating what we were seeing. We heard stories from survivors in lands around the world who had benefited from Red Cross activities after natural disasters, such as earthquakes and hurricanes, and from war-torn regions. In one case, we found ourselves in a large room with life-sized images facing us. As we moved around the room the avatars became more animated as they told the personal story of an individual. In another room were several small alcoves where avatars of Red Cross workers or recipients of Red Cross activities elaborated in more detail on their philosophy or experiences. 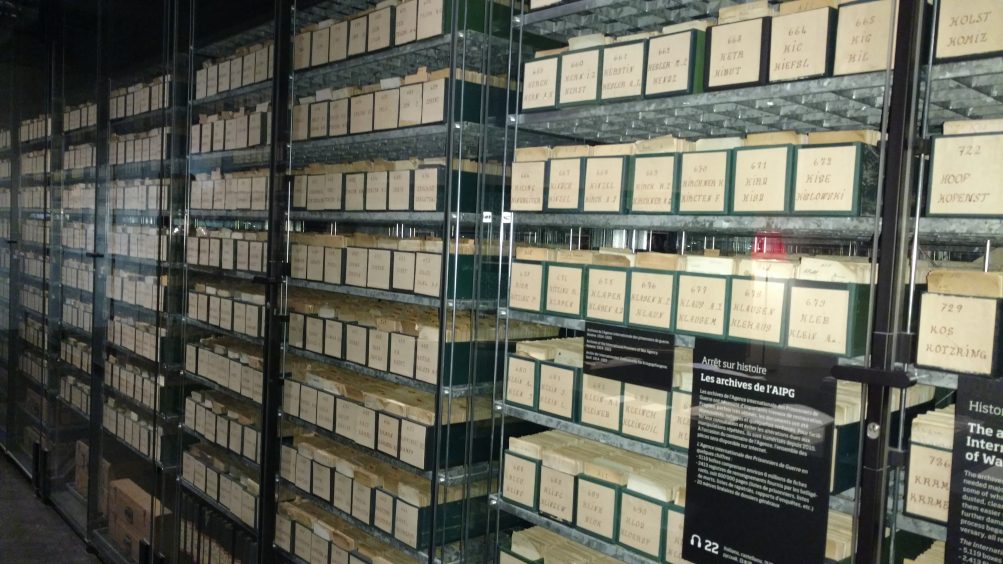 My favorite section was a room that held the original catalogs of people imprisoned in World War I. It was a complex, yet effective, manual system that grew to about seven million small cards in World War I and 45 million cards in World War II. Each card contained basic information about prisoners or missing persons. These were cross-referenced with notebooks that had more detailed information. These records were used to track and help family members locate displaced people all over Europe. An interactive exercise in the exhibit allowed visitors to follow the paper trail of particular individuals. Of course, this all information is digitized now. I’m a technophile and understand how much more efficient it must be now, but felt the loss of this tangible connection to real people that was palpable by walking through passageways lined with narrow boxes of index cards. It’s difficult to capture the same emotional impact with digital information, though they tried. Long lists of projected names scrolled down a vertical wall while a long horizontal wall contained photographic images from Red Cross scenes around the world.

Another powerful exhibit featured audio clips from radio stations that broadcasted Red Cross information in stricken countries, offering hope to people out of reach. Letters entrusted to Red Cross workers in war or disaster zones also offered an emotional glimpse into the impact of communication, now largely replaced by emails. The stark, uniform nature of digital writing loses some of the emotional content provided by handwritten words. 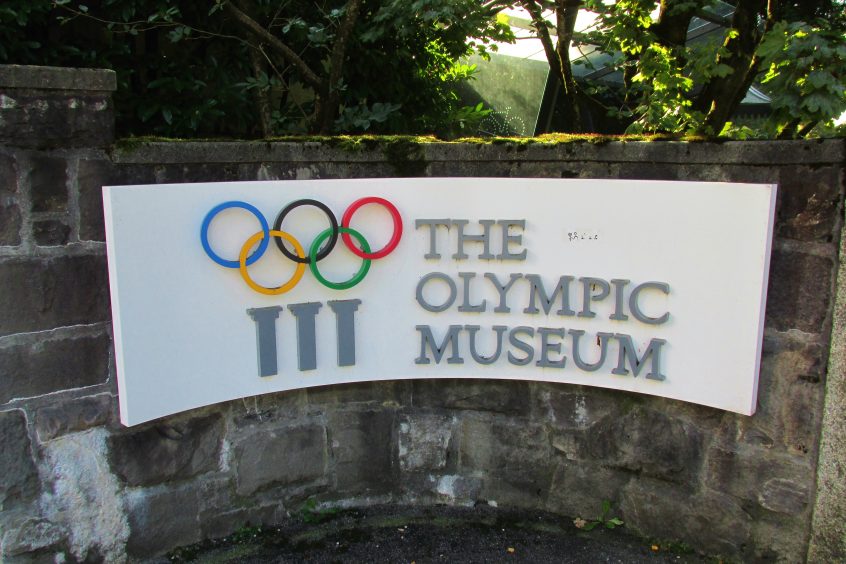 About an hour’s drive from Geneva is the comely city of Lausanne, also located on the shores of vast Lake Geneva. After our aforementioned hike on the Tour of Mont Blanc, we spent three days in Alsace, France. When we drove back to Geneva, we spent one night in Lausanne.

The Olympic headquarters are located in Lausanne, as well as a fascinating museum that chronicles the history of the Olympics. For anyone with even a passing interest in sports, an entire day can be absorbed in this museum. The lakeside museum is topped with a large restaurant that features a wall of windows that showcases the shimmering lake.

A large curving ramp flows down the three levels of the museum. The journey starts in ancient Greece, follows the bumpy ride to the establishment of the modern games and highlights major milestones in Olympics through the ages. What a difficult task it must have been to decide where to shine the spotlight with more than 2,000 years of history to cover, even with a 1,500 year break. The curators did an excellent job balancing narrative, memorabilia, film, anecdotes and audio-visual clips. For displays of artifacts such as uniforms, sleds, skates, shoes and the like, audio handsets were utilized to narrate descriptions. Interviews with athletes and Olympic administrators reminded us of past triumphs as world records fell and helped us understand the despair of lost dreams. We relived the frustration of political interference with boycotts and felt sadness for the teams that were lost in tragic accidents. An impressive database of searchable film clips allowed us to pull up just about any athlete or event from past Olympics. Kids and adults alike participated in arcade-like games on the lowest level that introduced basic athletic skills. One of my favorite displays included the many intricately designed torches used to light the Olympic flame and examples of the medals used in past Olympics, each one laden with symbolism, hope and history.

Geneva and nearby Lausanne offer excellent sightseeing and inspiring museums for the traveler. 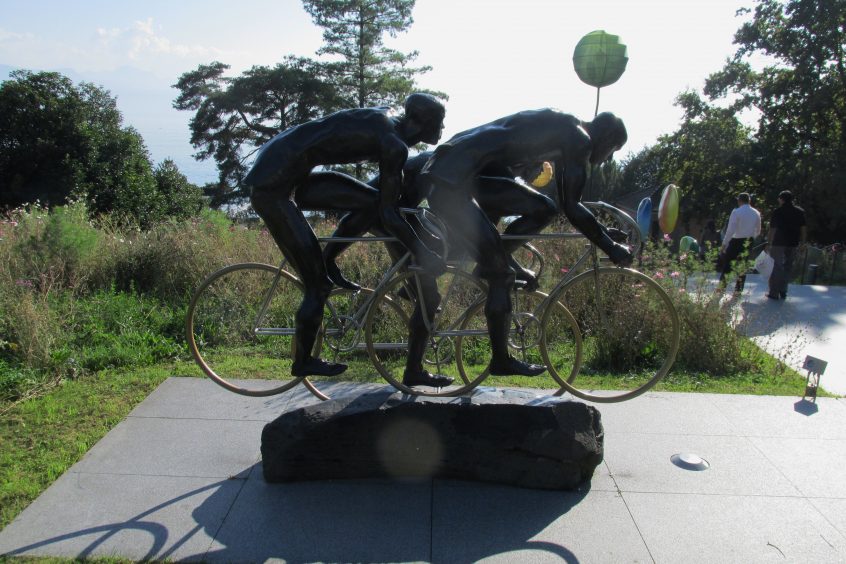 Sculpture outside of Olympic Museum

4 responses to “Two days of inspiration around Lake Geneva, Switzerland”