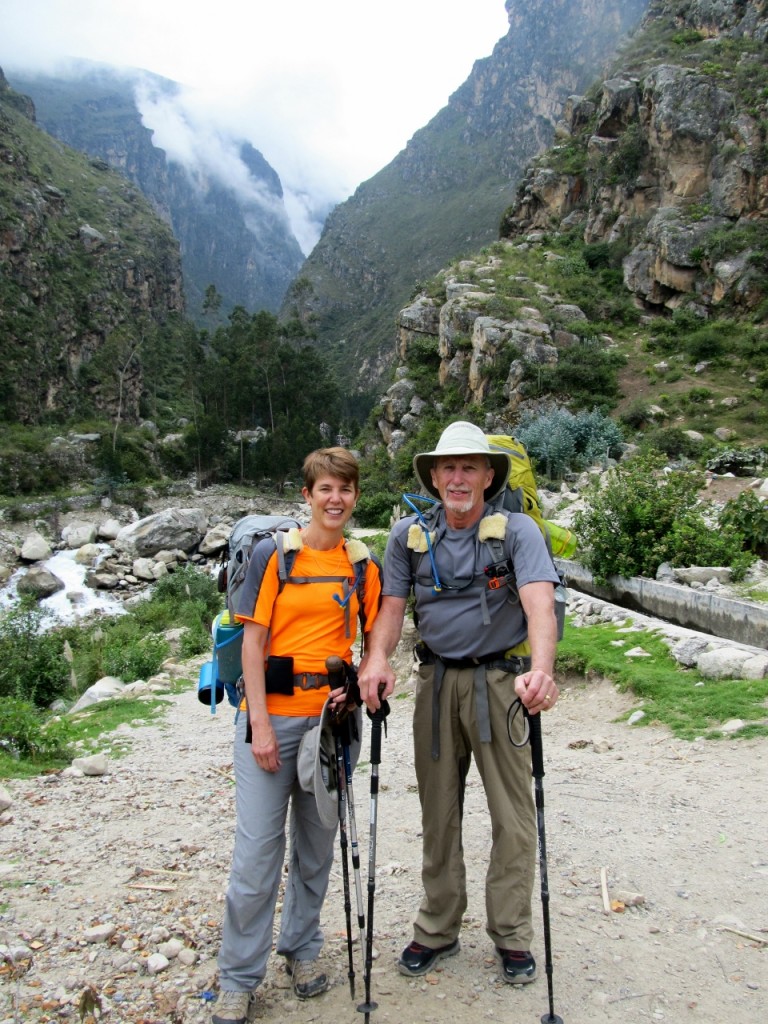 I had trouble finding detailed information about how to hike the 31 mile (50 km), four-day Santa Cruz Trail in Peru. For being such a popular trail, planning a backpacking trip on the Santa Cruz Trail was difficult. Like most of the backcountry trails in the mountainous areas of this region, it’s an Inca trail, being one of the many routes that connected the highlanders to the sea in ancient times. Located in the Cordillera Blanca, the spine of the Andes closest to the coast, the trail cuts through the Quebrada Santa Cruz Valley in Huascaran National Park. This park is pretty much any hiker’s dream, with spectacular day hikes, backpacking trails, mountaineering routes and ice climbing. Many feature snow-covered peaks, hanging glaciers, gushing waterfalls, aquamarine lakes and fascinating sub-tropical flora. In fact, it is home to 600 glaciers, nearly 300 lakes and 50 peaks over 18,700 feet (5,700 m).

To get there, many travelers start with an eight-hour bus ride from Lima to Huaraz, the closest major town to the park. We got that far in the planning by looking at various guidebooks, including Lonely Planet and the DK Eyewitness Travel Guide. They all said that the trail was well trod in the dry season (April-October) and that, although many do it as a guided trek, it was easy to complete independently. But that’s where the advice dropped off. We looked online and found many accounts of the guided treks and a few from more adventurous solo hikers, but none contained the nitty-gritty information such as what temperatures might be expected at night, and whether freeze-dried food could be purchased in Lima or Huaraz. Instead, general statements were made that it was “cold” at night and that “food could be purchased in Huaraz”. I emailed one blogger about camp food who helpfully wrote back that I should probably bring my own freeze-dried food. I tried emailing one of the outfitters who rented gear, but they stopped responding once I told them I wasn’t interested in a guided trip.

In the end we decided we should just bring almost everything we needed and planned to get maps and fuel when we got there. I don’t consider myself an expert on everything related to backpacking in the Cordillera Blanca but I’ll share what I learned. 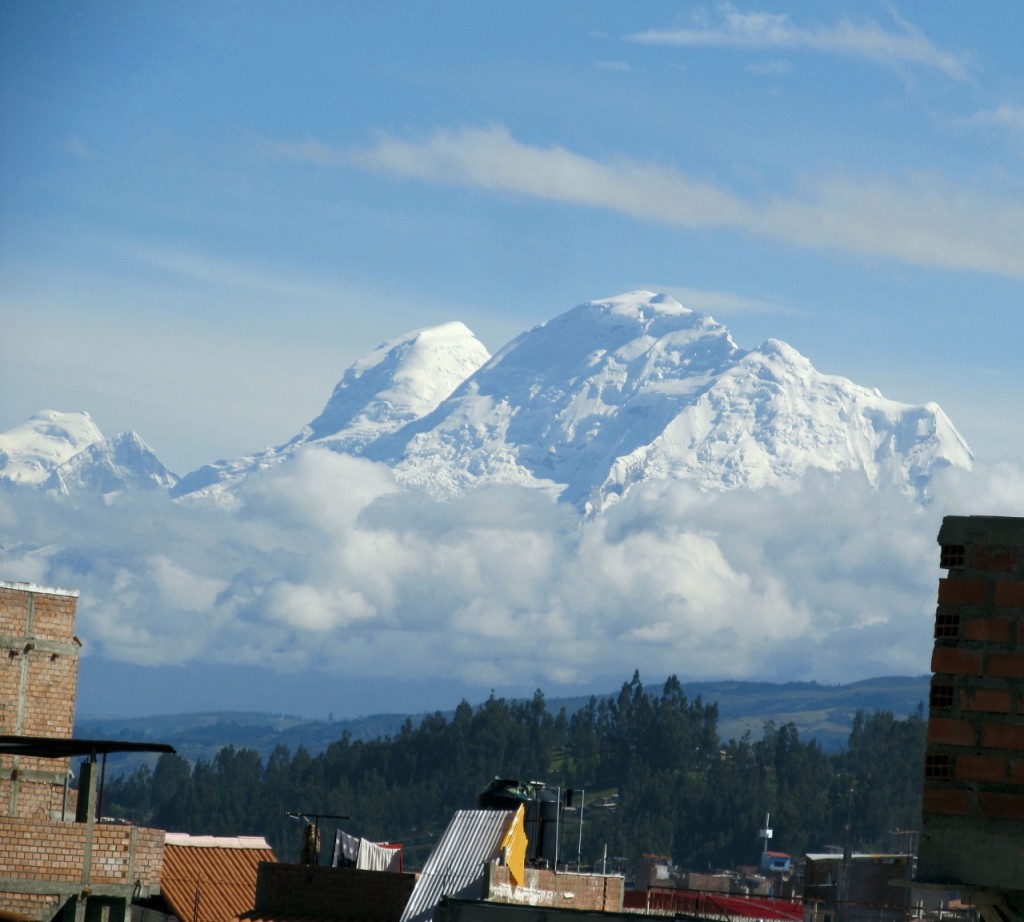 There are many hostels and guesthouses in the vicinity of the Plaza de Armas, the main square in Huaraz. We stayed at Olaza’s Guesthouse (aka Olaza’s Bed & Breakfast, Arguedas 1242, 80-100 soles [US $25-31] for a double room), a comfortable mid-range inn with bus station pickup, hot showers in private bathrooms, generous breakfasts and friendly staff who speak a little English. The views of snow covered mountains from the roof terrace and lounge are stupendous. Tito Olaza has a lot of experience with trekking and mountain biking, so he can answer a lot of questions if he’s around. Transportation to trailheads can be arranged by the staff. It may be Tito or someone else who drives you. 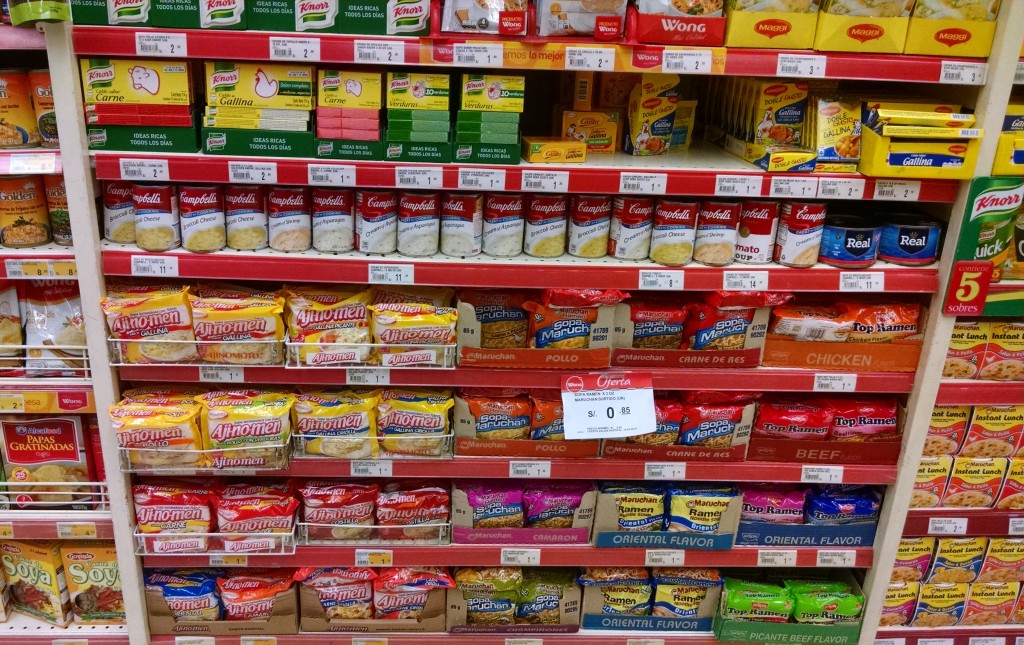 The soup section was extensive at Wong’s Supermarket in Lima.

I never did find a purveyor for a large variety of freeze-dried food in Huaraz, though I didn’t go into every outfitter’s storefront. The many outfitters we saw seemed to cater to guided services, and they use mules to carry voluminous amounts of fresh food. The only place where I saw any freeze-dried food was at our lodging, Olaza’s Guesthouse, in Huaraz. They had a small display case at the entrance that featured a couple of packages of freeze-dried dinners. I was glad that we brought our own Mountain House dinners from California. I resisted bringing anything except commercially packaged foods from home, as I was worried about getting through customs at the airport. I needn’t have worried, though, because no officials asked about food or questioned what was in our packs. I didn’t see any place to indicate that we were bringing food into the country though I scoured the form.

Some fresh and dried foods, as expected, could be found in Huaraz. They had the typical large, open-air market, located a block from the main square, where pigs feet and guinea pig could be found, as well as fresh vegetables and fruit. There were many small markets to be found within a few blocks of the main square, and we picked up some powdered milk, crackers, bread, cookies and mozzarella cheese. Dried banana rounds were plentiful, as was chocolate. We were reluctant to try the locally made sausages, not knowing how they tasted or how safe they were, but they were available. I never saw tortillas, a staple for our backpacking lunches. We found the Trujillo store near our guesthouse that catered to a more upscale crowd, and they had packaged pasta, rice, soups, ramen, peanut butter and other items in small amounts that could be used by a backpacker. It would be possible to buy all the food in Huaraz if you’re not picky, and if you use a pot and stove to cook, even better. We use a JetBoil and only boil water, which is the reason I brought our own freeze-dried food and instant oatmeal.

A better place to get loaded up with food was in Lima, which we figured out at the end of our trip when we had several days to act like the tourists that we were. We saw many large, modern supermarkets and were impressed with Wong’s, in particular, a chain with two locations in the trendy Miraflores district, where we stayed, and many other locations around Lima. One is located on Santa Cruz Avenue, in the heart of Miraflores, while the other is on Benavides Avenue. Wong’s rivals the American store, Whole Foods, in its selection of cheeses, cured meats, nuts, dried fruit, instant oatmeal, packaged sauces, pasta and anything else you could dream of. It was the only place where I saw tortillas, which are not used in Peruvian cooking. You can even get a flat screen TV or furniture as it’s a full-service department store. 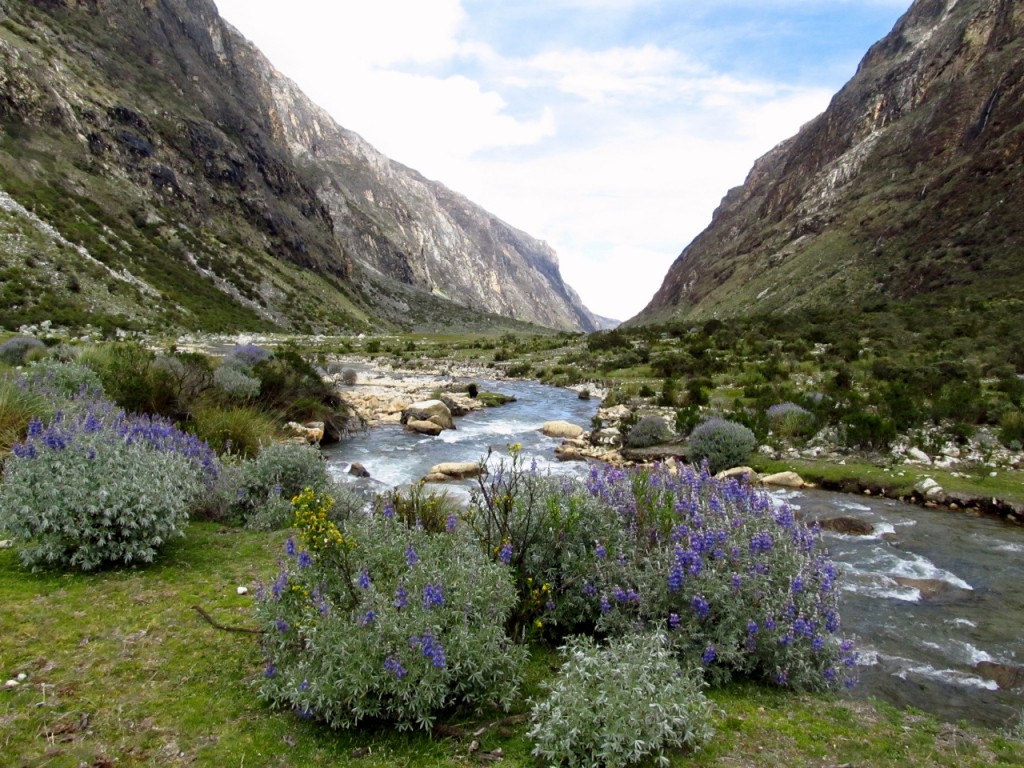 The route parallels a river and all the campsites have easy access to water. Purification is required, especially as the river is certainly contaminated by the many nearby stock animals, including cows, sheep, llamas and mules. We used a SteriPen, but boiling, chemical drops or tablets, or filtering could be used.

We went to a couple of different places to find fuel in Huaraz, but because most outfitters were handling guided trips, we didn’t have any luck at first. We finally found some large fuel canisters at a mountain shop at the small Ginebra Park (Parque Ginebra), tucked away on a side street near across from the Plaza de Armas. We would have preferred the smaller size, but the guy at the counter said that was the only size available in the whole town. Since I didn’t go all over town I can’t confirm that. Many of the tourist oriented hostels have partially used canisters left by previous backpackers. The best way to find fuel or other needed supplies is to ask the innkeeper or other backpackers.

The Camping Center in Lima was small but carried a large selection of fuel.

In Lima, I checked out the Camping Center  (Address: Av Benavides 1620, Lima), a place a blogger had mentioned. It was in Miraflores so we walked there from our hotel, but it was a long walk since it was in the part of the district on the other side of the expressway (the side opposite the coast) from where we were. I was expecting a big store like Dick’s or Walmart, but it was a tiny building in a residential neighborhood. They were stocked with fuel, backpacks, sleeping bags and basic camping equipment. The real bonus was that it was in this neighborhood that we were exposed to our first Wong’s. I had spotted it across the street on Benavides  Avenue as we approached the Camping Center so we stopped in for a gelato and found everything anyone could ever need to eat. Except freeze-dried food.

Getting to Huaraz:  Several bus companies service Huaraz from Lima and other cities. We used Oltursa, which provided good service. A bright, modern waiting room in the San Isidro district of Lima (Av. Aramburú 1160) had rows of seats, a bathroom and luggage drop-off area for backpacks and large bags. Daypacks and bags were allowed on board and could be stowed in overhead racks. The bus was equipped with comfortable seats that reclined, seat belts and a bathroom. A meal of lukewarm chicken and rice with hot or cold drinks was served by bus attendants. A continuous stream of Spanish-dubbed American movies played on overhead monitors, which got a little old. I would have preferred headphones so that riders could choose whether to listen or not. 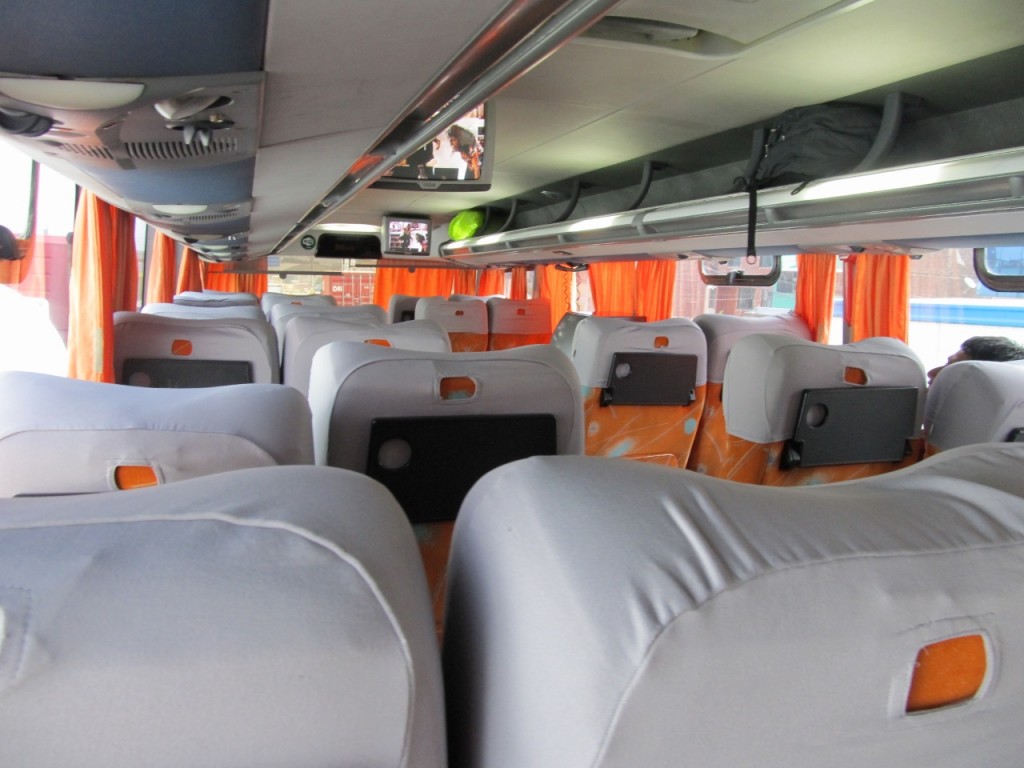 The Oltursa bus had comfortable reclining seats and meal service

Getting to the Trailhead: First you have to decide which direction you want to go on the Santa Cruz Trail. Both are heavily used. We chose to start at Cashapampa because the ascent to 15,000 feet is spread over two days instead of one. The other direction starts at Vaqueria. It’s two hours to Cashapampa, which is a fairly large community, and five hours to Vaqueria, which is smaller and more remote.

There are two ways to get to either trailhead from Huaraz. One is to get a collectivo, or public mini-bus, that plies the roads everywhere, ferrying locals to and fro. The other is to take a taxi or private charter. We were planning to take a collectivo, but the people at our inn made things so easy that we decided to pay more for a private car. The two-hour ride to Cashapampa cost 150 soles (US $50) and took about two hours. Our driver had never been there so we stopped a couple of times to ask local residents where the town was. He tried to drop us off on the side of the road, but we insisted on locating the actual trail head, which is marked with a sign.

To take a collectivo from Huaraz, walk up the main street, Luzuriaga, toward the river. Head to a lot north of 13 de Diciembre, where they congregate. They depart every few minutes to Caraz, an intermediate stop on the way to Cashapampa, and Yungay, a mid-point between Vaqueria and Huaraz. In Caraz, it’s a 20-minute walk or short motorcycle rickshaw to a different area to catch the collectivos to Cashapampa. If you have a big pack on they know where you’re going.

When you finish the trail, collectivos are available at either end to take you back. It’s best to try to finish before mid-afternoon for the best chance of getting a collectivo. We finished mid-day in Vaqueria and found a tour company van driver who was willing to take us back for 25 soles (~US $8) each for the five-hour trip. We often found that the return trip from any destination in the region was much cheaper than the ride to the destination but found the prices overall to be reasonable.

Continue on to Part 2 on planning a backpacking trip on the Santa Cruz Trail, which covers Guidebooks, Permit, Altitude and Weather and a complete trip report. A slideshow is available on Facebook.

Facts at a glance 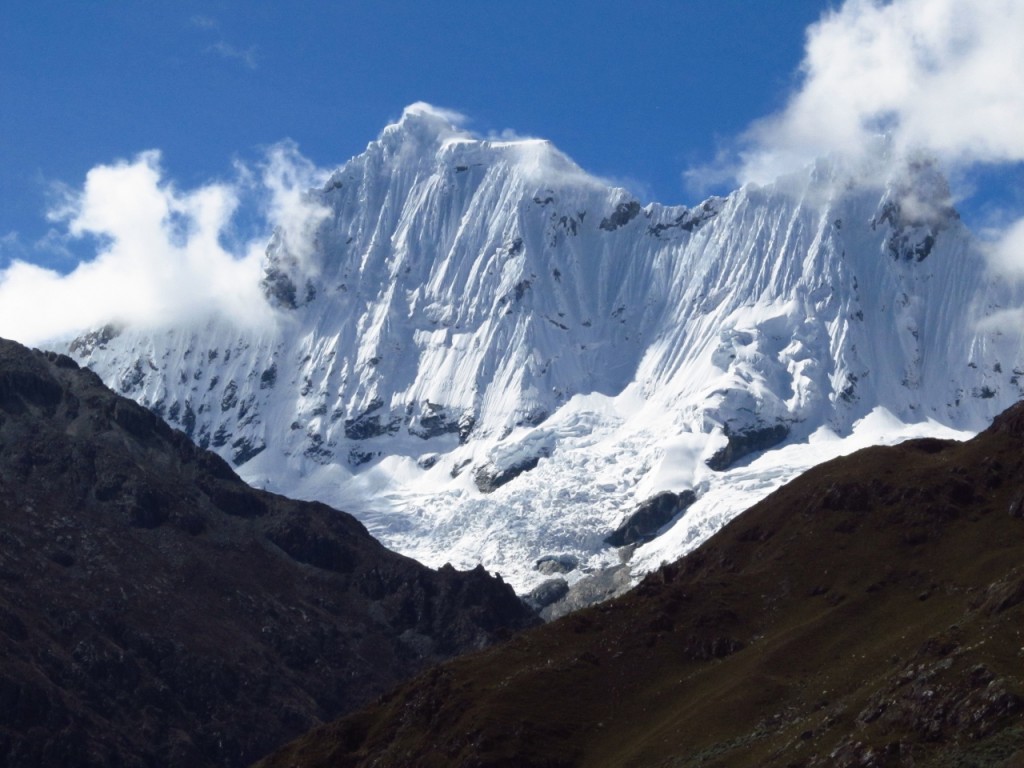 The view of Mt. Pisco on the ride back to Huaraz was stunning