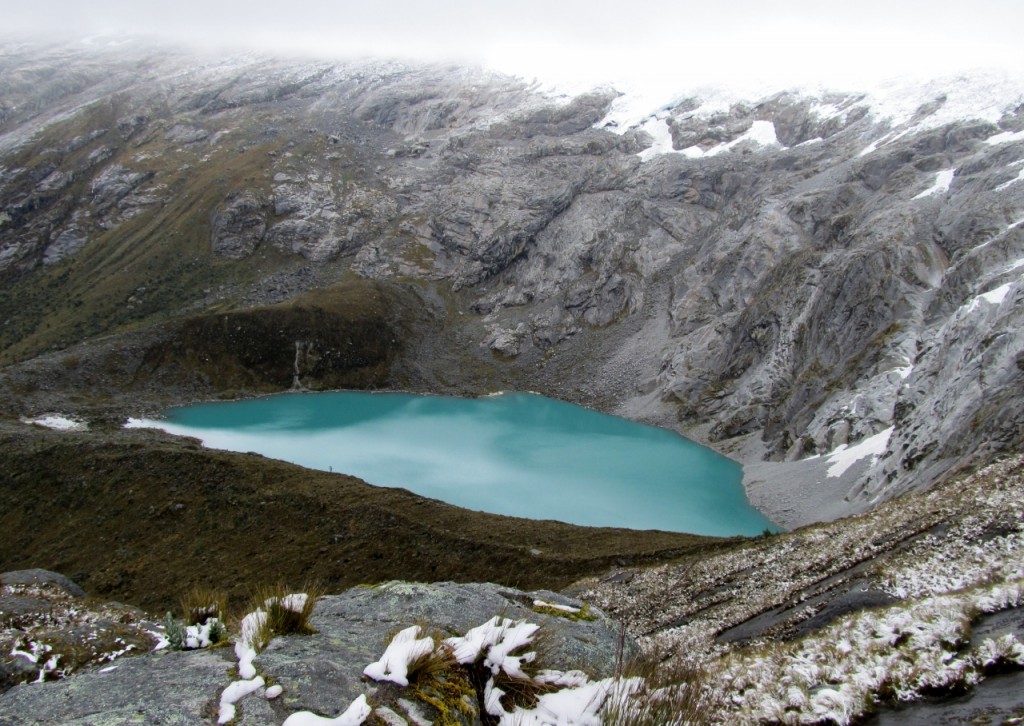 The turquoise waters of Lake Taullicocha are visible near Punta Union Pass at 15,617 ft (4,760 m)

I had trouble finding detailed information about how to hike the 31 mile (50 km), four-day Santa Cruz Trail in Peru. For being such a popular trail, planning a backpacking trip on the Santa Cruz Trail was difficult.

Most people do it as a guided hike, but the track is well signed, and backpackers with the right experience and equipment can easily complete the four day hike independently. Part 1 covered planning logistics such as transportation, lodging in Huaraz, food, water and fuel. Part 2 will cover other information to aid in preparations.

At Olaza’s Guesthouse, where we stayed, we were able to purchase a map of the Santa Cruz Trail. It was, however, not a true topographic map. The Lonely Planet “Peru” guidebook had a basic map, and a decent trail description, but the best resource we had was not ours. We found the Lonely Planet “Trekking the Central Andes” guidebook, which contained a detailed map and detailed description of the hike, in the bookshelf at Olaza’s. We borrowed it for the hike and were glad we did. Unfortunately, the book is out of print, as are other good guides. Many of the backpacking-oriented hostels and inns have maps and guidebooks for reference, if not for sale. This map is a pretty good rendition of what the basic maps look like. Once we returned home I started researching in earnest and discovered, “Peru’s Cordilleras Blanca & Huayhuash, The Hiking & Biking Guide” by Neil & Harriet Pike, published in 2015. I ordered it and can highly recommend it. It has good background information, detailed hand-drawn maps and thorough descriptions of the trail. 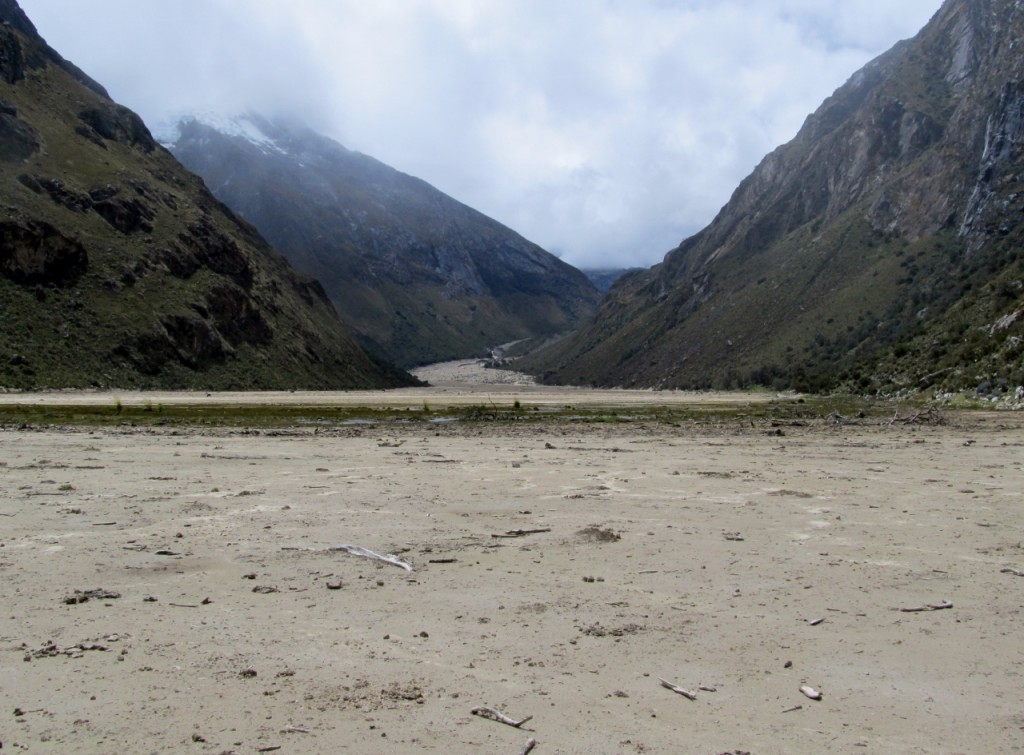 The landscape has been permanently rearranged after a massive landslide in Feb 2012 took out Lake Jatuncocha, which is now a large, sandy plain

The only tricky part about older descriptions is that many were written before the massive landslide in February 2012, which broke an ice and mud dam and rearranged the topography. Instructions to “follow the trail on the right side of Lake Jatuncocha” are out of date, as the lake has been replaced by a large sandy expanse of land that is the lakebed. The landslide started with an avalanche that caused the smaller Lake Arteson Bajo to overflow. That, in turn, caused an embankment of Lake Jatuncocha to fail, filling the valley below with mud that took out roads, bridges, houses and two electric plants. The Santa Cruz River meanders through the sandy plain, though, restricting movement. There was one section on Day 2 where the trail dropped into the fast-flowing river. We had a choice of fording the river, doing a sketchy dance around a large boulder with a drop-off into the river, or bushwhacking up a hill through thick shrubs. We bushwhacked. A log bridge allowed safe passage across the river at the head of the canyon. After crossing the bridge, the proper trail immediately veered to the right, not straight ahead, as that one went to a side trip to a high alpine lake.

Other than that, the trail is fairly obvious and generally well signed. Campsites are easily spotted as they all have a prominent, though not well maintained, stone outhouse that can be seen from a distance. 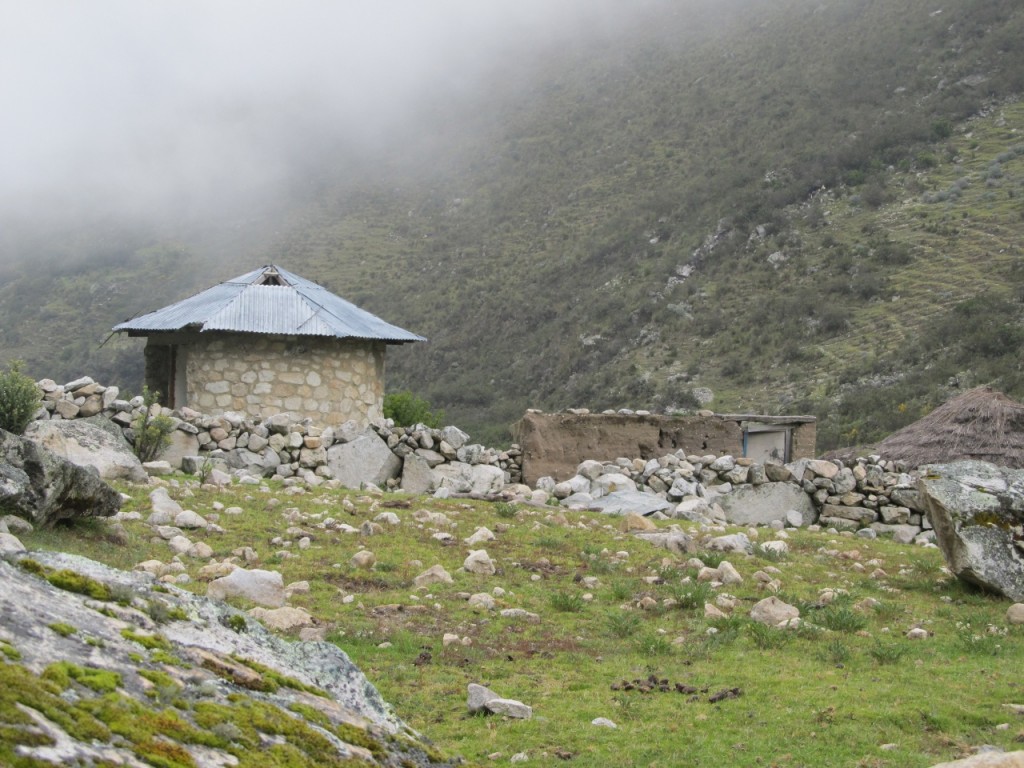 Campsites can be spotted by these round outhouses, which are not maintained

Permits are required to hike the Santa Cruz Trail. There is a permit office (Parque Nacional Huascaran Office at Sal Y Rosas 721) in Huaraz, a few blocks from the main square. We visited the office the day before we were to start the trail, but found it closed. This was not surprising when we realized that it was Sunday. At the start of the trail on either end there are park kiosks that issue permits. In Cashapampa the small building at the trailhead was occupied by a park official who had us complete a line on a ledger, recorded our passport numbers and issued us a paper permit. The fee was $65 Soles (US $20.50) per person for a week-long pass.

Near the end of the trail we were approached by a Peruvian man who looked like he was out for a day hike. He turned out to be a park ranger, who checked our permit and stamped it. If we hadn’t had a permit I think we could have paid him, but I’m not certain.

Huaraz and the surrounding area, including the Santa Cruz Trail, is at significant elevation, ranging from 10-15,000 feet. Many peaks are even higher. Travelers coming from Lima or other lowland areas are advised to plan to spend two or three days in Huaraz doing day hikes to acclimate. We spent three nights in Huaraz. One day we just explored the town and scouted out places to get our provisions, and another day we did a wonderful day hike to Lake Churup that demonstrated how out of breath we were. By the third day we were reasonably acclimated. For more information on altitude, see related article on this blog on Preventing Altitude Sickness. 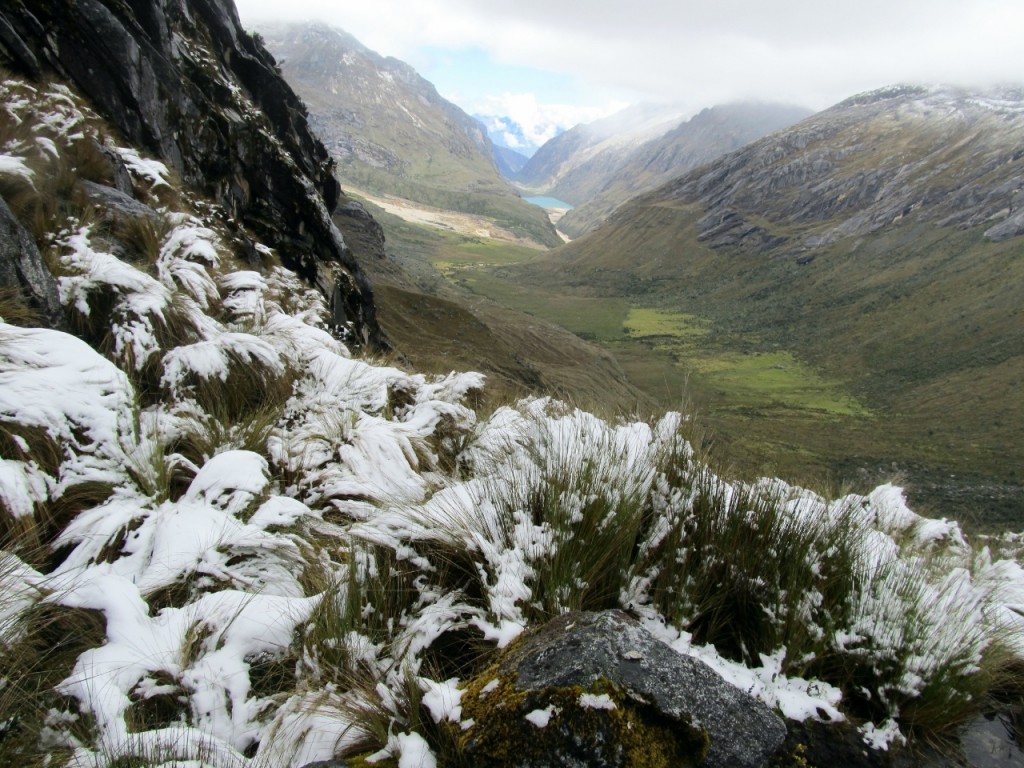 Weather varied from warm and moist to frigid and snowy. This is near the Punta Union Pass, looking back at Lake Ichiccocha. Cashpampa is not visible, further down the ravine.

I didn’t have a thermometer so all I can do is quote averages and describe the weather. Because the region is semi-tropical the temperature swing between seasons is not great. The big difference is between the wet season (South American summer/North American winter) and the dry season (their winter). From reading other reports it sounds like the trail is hikeable in the wet season and that many mornings are clear, with rain every afternoon. That is the pattern we experienced hiking it in April, the tail end of the rainy season. Rain is less likely in the dry season.

Temperatures range from below freezing, to warm and tropical (32-57 F [0-14 C]), depending on the altitude. Overall, mornings were clear and pleasant, rain came every afternoon and nights were chilly. The temperature didn’t dip below freezing at night, despite the sleet and snow going over the top of the pass.

When we started off on the first day the sun was shining and I felt warm. I went so far as to roll up my pant legs, but my ankles were promptly covered with red welts from tiny biting insects similar to our no-see-ums. Then I brushed a patch of stinging nettle that gave me neuropathy in my left calf for half a day. From then on the pant legs stayed down. As soon as the clouds moved in, the temperature cooled down. The first evening it got cold as soon as the sun went down. I was comfortable in my hiking pants, long sleeved synthetic shirt, ultra-light down jacket, light rain jacket, thin gloves and thick wool hat. I had upper and lower long johns to sleep in, but slipped out of the lower part after I overheated in my 20 degree F down sleeping bag. We used a Sierra Design Lightning 2 FL tent with an integrated fly for protection from the elements.

The second day we hiked into freezing rain for the last hour, and I was nearing hypothermia by the time we set up camp. I warmed up quickly once I got out of my wet clothes. The third day we went over the 15,000 foot pass in a light shower of freezing rain, and on the other side experienced a few moments of swirling snow. Some slushy snow accumulated in the crevices, but none really stuck to the path. Fairly quickly we descended to more moderate temperatures and terrain, though it poured rain in the late afternoon, turning the riverside meadows into deep bogs. By the time we reached Vaqueria on the fourth day the air was warm and humid, just like when we started at Cashapampa.

The Santa Cruz Trail is a moderately challenging trail with vistas of deep canyons, glaciers, lakes, colorful flora and high peaks that anyone with backpacking experience can enjoy, with or without a guide. Continue to the trip report to learn more about planning a backpacking trip on the Santa Cruz Trail.

Facts at a glance

Exploring the Eastern Sierra by horseback at Hunewill Ranch