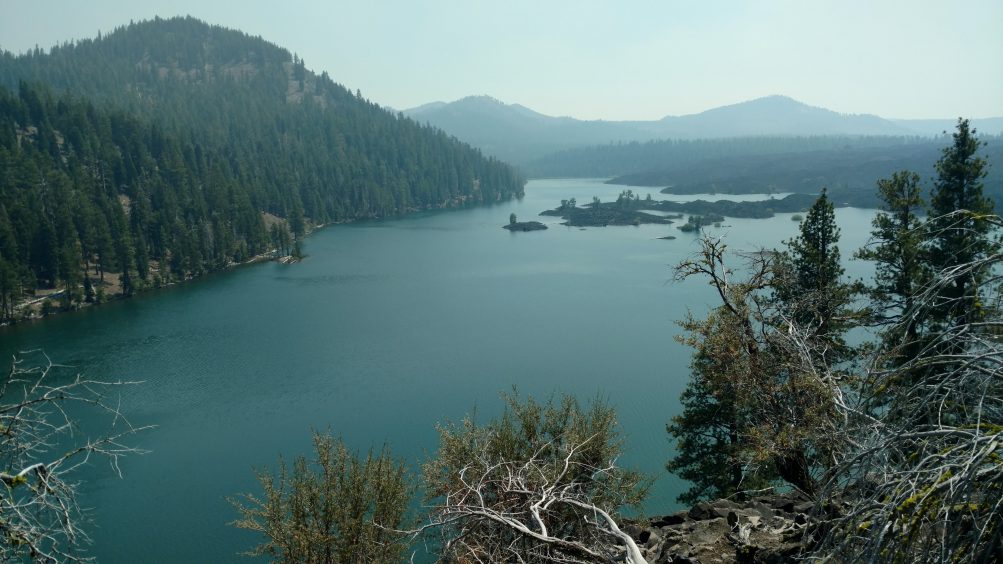 Butte Lake-our campsite was at the far end of the lake on the left.

The eastern part of Lassen Volcanic National Park is dotted with lakes, making it easy to find routes of varying lengths that allow for swimming and water views from campsites. This 23-mile, 3-day/4-night loop from Juniper Lake has varied terrain, endless lakes and a network of trails to choose from.

With fires raging across the west, I wasn’t surprised when my trip to Yosemite was canceled by the park due to the closure of Glacier Point Road. After cross-referencing a few fire websites (Inciweb, AirNow, Purple Air), it looked like Lassen Volcanic National Park might have relatively clear air. Since it was a week before the trip, it was a major bonus that the permit only required a simple, self-registration process at the trailhead.  This was a Sierra Club trip with the San Francisco Bay Chapter Backpack Section. Andy Westbom and I led the group, following a route that Andy planned. We almost had to cancel the trip entirely so I was grateful that Andy could jump in with another route that saved our trip. 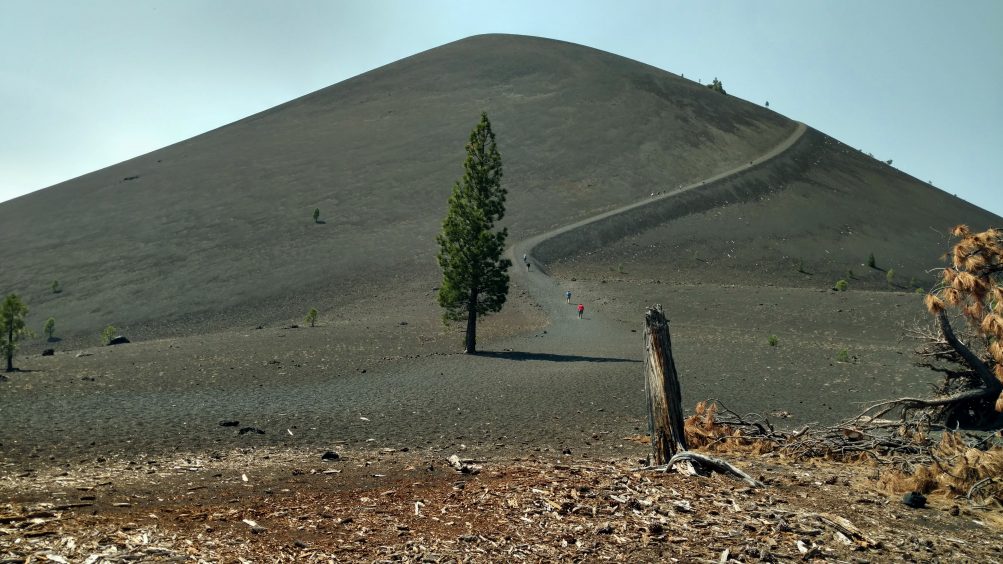 The Cinder Cone is a dramatic landmark.

The itinerary was planned to allow time each afternoon to relax at camp and swim.

Our group met at Almanor South Campground near Lake Almanor the night before the hike. This is a wonderful campground because so many of the sites are large and there is plenty of room to spread out. It’s forested so most of the sites have privacy and they had the usual amenities of running water, nearby toilets and a picnic table. It was mid-July and warm in the evening.

The nearby town of Chester offered a choice of restaurants so we elected to eat at the Kopper Kettle Cafe (decent food, nothing fancy) instead of preparing dinner at the campsite.

We drove to the Juniper Lake Ranger Station, which is about 12 miles north of Chester on Chester Juniper Lake Road (Rt. 36). The paved road in the first half transitions to a well-graded gravel road for the last seven miles. The ranger station is on the left side of the road. No one was there when we pulled up so we followed the directions and filled out the form that we found in a box. We drove a short distance beyond the ranger station to a large parking lot at the north end of Juniper Lake. We noticed some haze hanging over the lake and wondered if the smoke was drifting all the way up from Yosemite. 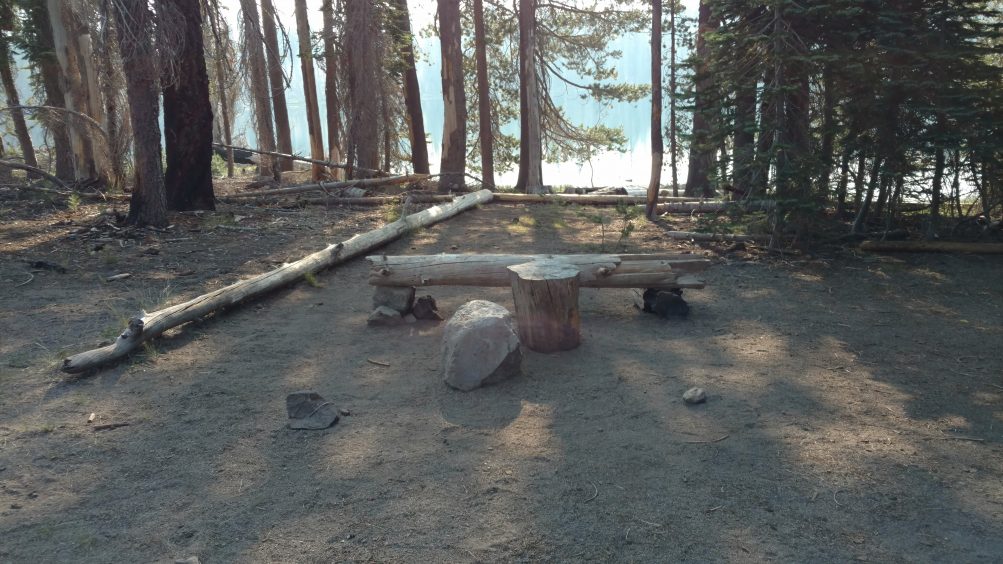 Rainbow Lake-There are many lakes with spacious campsites.

Summary of the Hike

Overall, the hike felt moderate and pleasant with time to swim every day, which the group enjoyed a lot. Some parts of the trail undulated over some hilly terrain but nothing very extreme. It was enough to feel like we were getting a good workout. There was a lot of variety, with plenty of forested areas and a sandy, volcanic section around the cinder cone. It was pleasantly warm in the shade but felt much hotter on the approach to the cinder cone. Because of the heat in that segment, two of us elected to skip the hike up to and down into the cone but we enjoyed seeing the photos after the group returned. Butte Lake, in the middle of our hike, is reachable by car so there were many people enjoying that end of the lake but the other end was deserted. We had Jackey Lake to ourselves and enjoyed our large campsite hidden in the trees. The best lake for swimming was Lower Twin Lake where we camped the first night due to the firm lake bottom. The other lakes had squishy, muddy bottoms but were still pleasant to swim in. 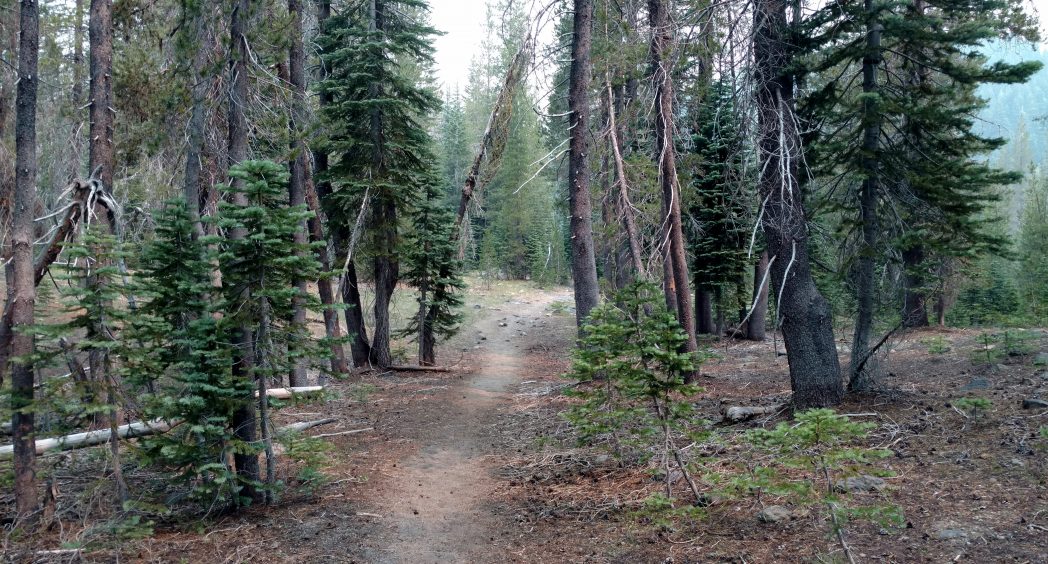 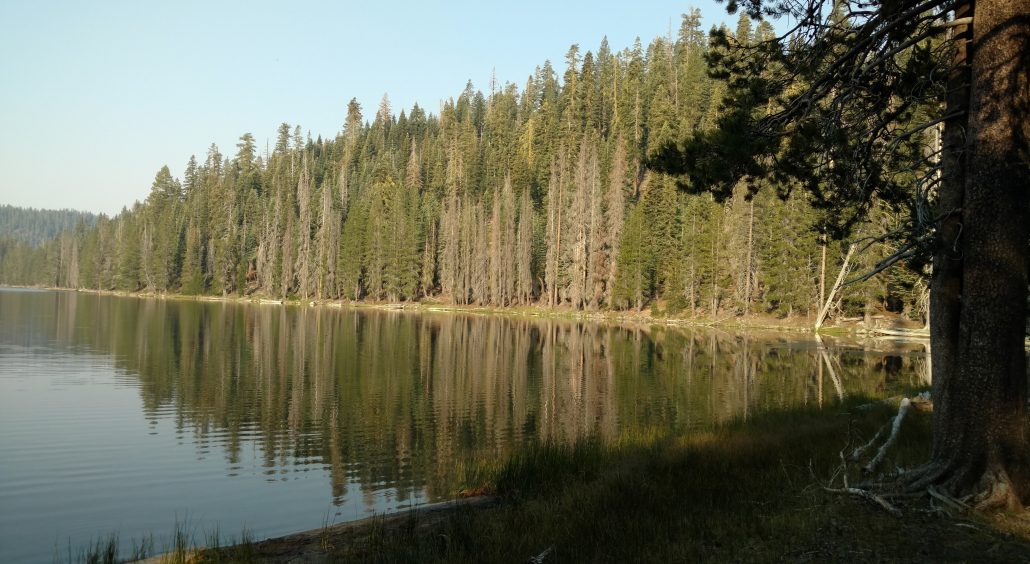 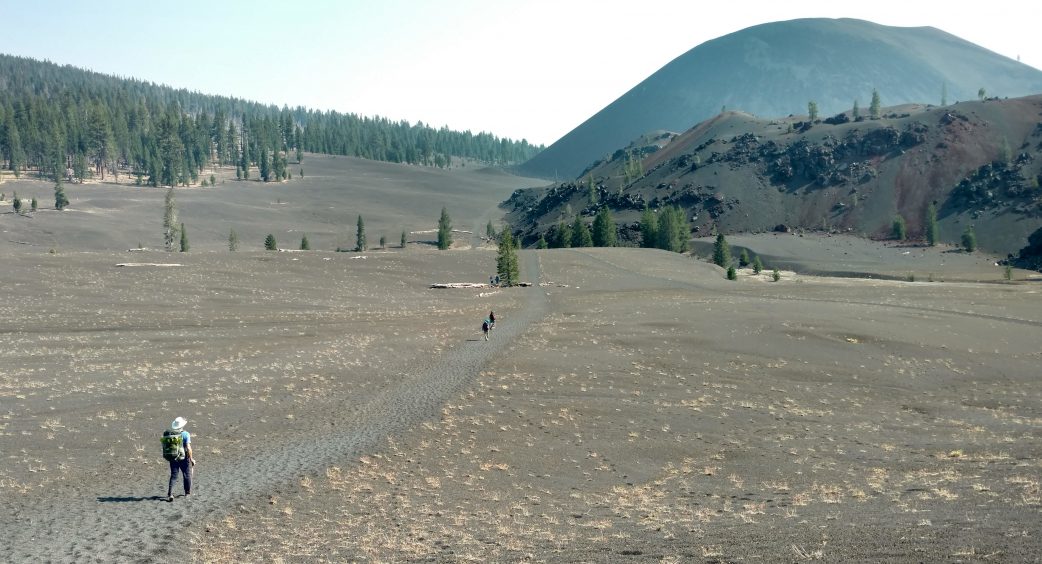 The approach to the Cinder Cone looks like a moonscape 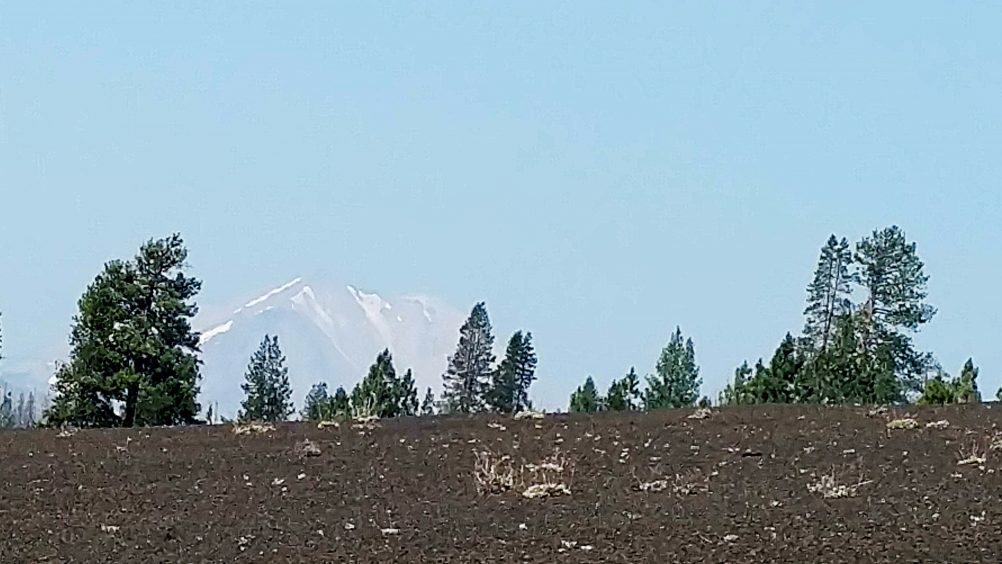 We caught a glimpse of snow-capped Mt Lassen 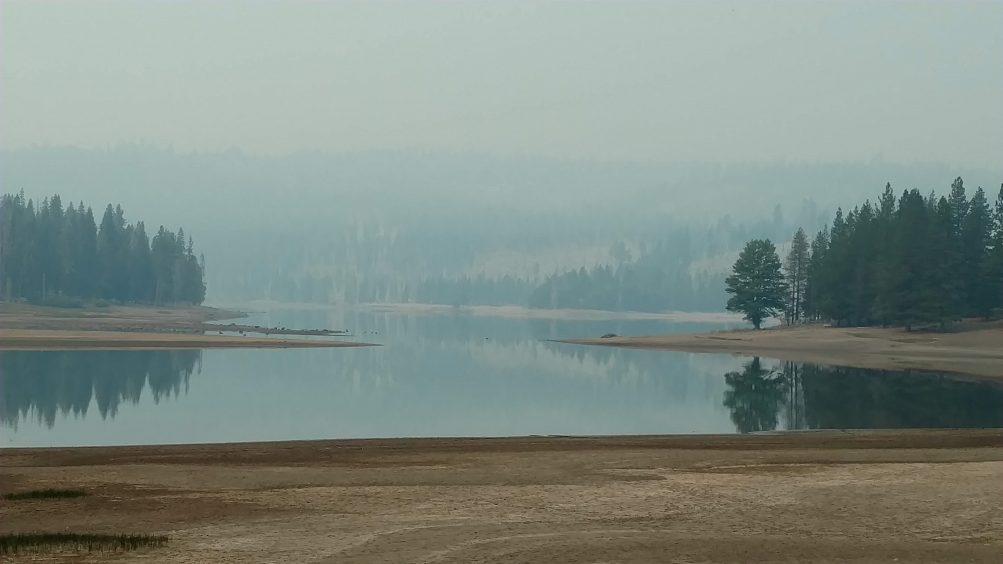 By the time we reached Snag Lake, the air was quite smoky from the Carr Fire 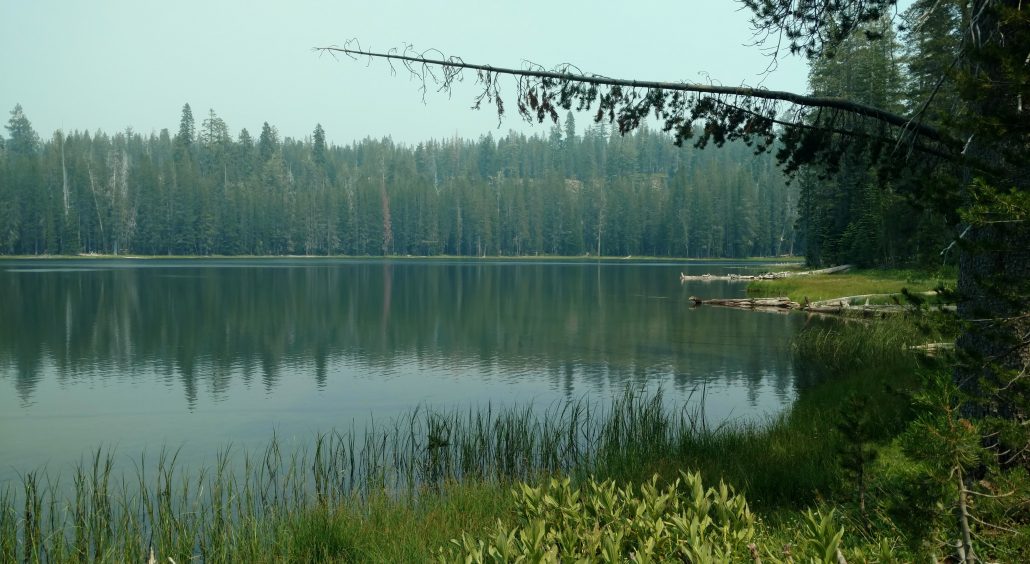 We enjoyed the solitude of Jakey Lake 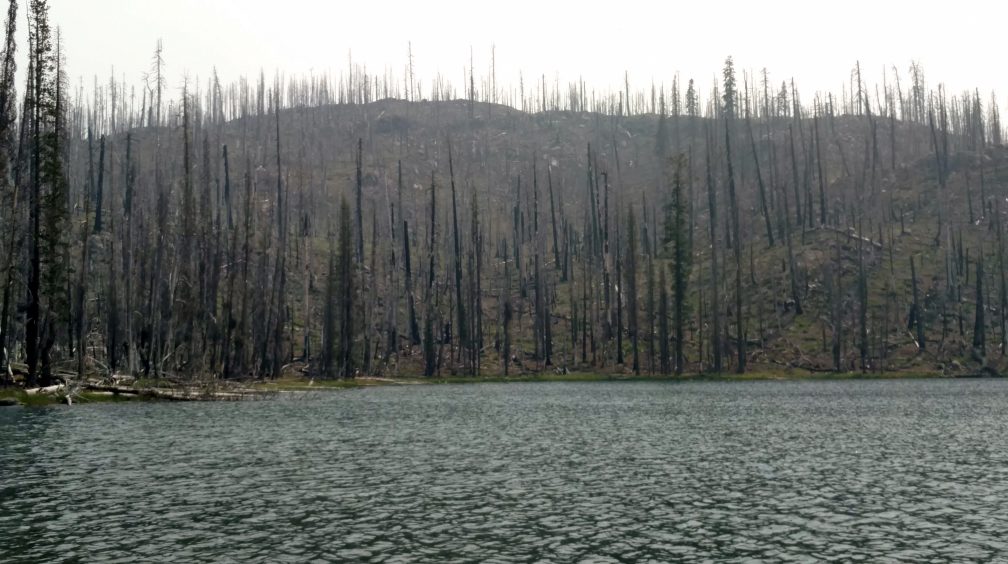 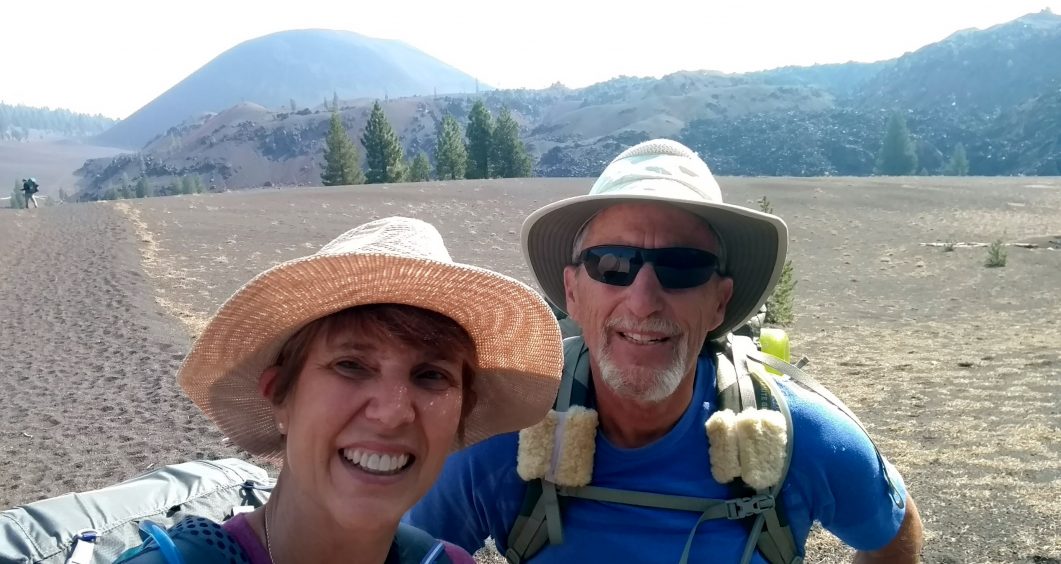 Inga and Steve on the approach to the Cinder Cone