Nelson Lake is a pretty lake in a unique location in Yosemite National Park as there are no maintained trails to the lake. It does require a permit, one of three cross-country locations within the park that require a permit (the other two are Budd Creek and Rockslides). Because a hike to Nelson Lake requires good map-reading and navigational skills, it is unlikely to be very busy at any time of year. It’s a beautiful 5.45-mile hike one-way to Nelson Lake from Tuolumne Meadows with moderate elevation gain. There are several variations that make it ideal for a one- or two-night backpacking trip in the heart of Yosemite’s high country. 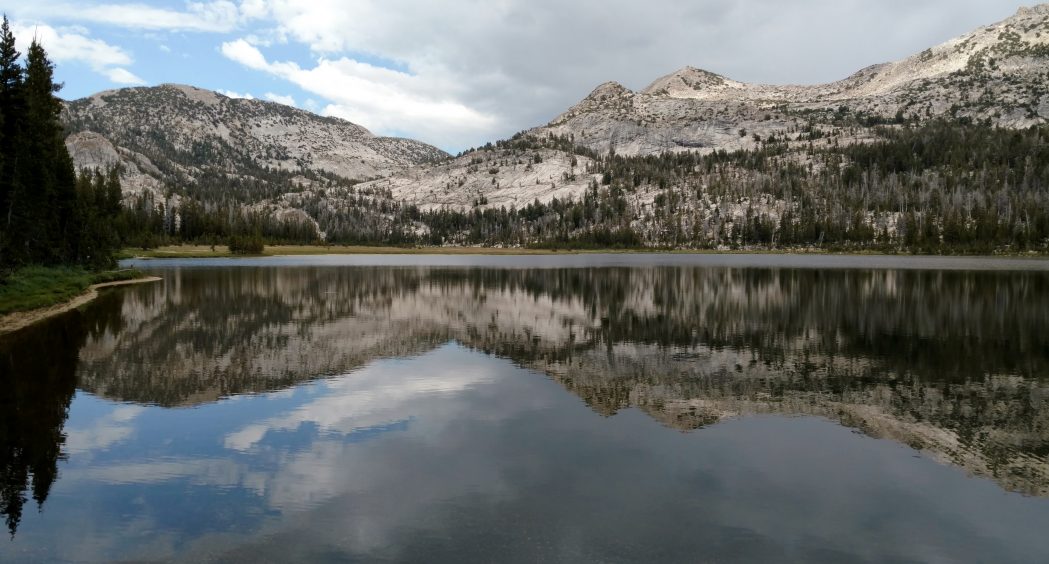 Nelson Lake is a small oval lake with forested campsites nestled against a giant rock wall. The area around the lake is ripe for exploring and would make a good base camp for a couple of nights. It is easy to walk the one-mile perimeter of the lake. We could hear water flowing from Reymann Lake cupped in a higher ledge of the cliff wall above us though we couldn’t see it.

An out-and-back overnight would be 10.9 miles. We elected to do a two-night semi-loop (more of a U-shape) in mid-July.  We started in Tuolumne Meadows, staying at Nelson Lake the first night and Lower Cathedral Lake the second night.  Options listed below involve additional cross-country navigation. This route was planned by Elizabeth Wenk and I had the good fortune to be able to tag along with Lizzy and her two kids.

We picked up our permit at the Wilderness Center in Tuolumne Meadows, then parked one car along Tioga Road near the Cathedral Lakes Trail entrance. We parked the other car near the Tuolumne Meadows campground on Tioga Road. If you only have one car, park one at Cathedral Lakes Trailhead and walk 1.6 miles to the Elizabeth Lake Trailhead. The Elizabeth Lake Trail begins inside the campground on Loop B Road but they don’t allow day parking there. It’s a short walk from Tioga Road to the trailhead.

Yosemite permit reservations may be requested using the online system up to 168 days in advance. The quota for Nelson Lake is limited to nine permits. Walkup permits may be available. I was able to get a permit a couple of weeks before the trip. 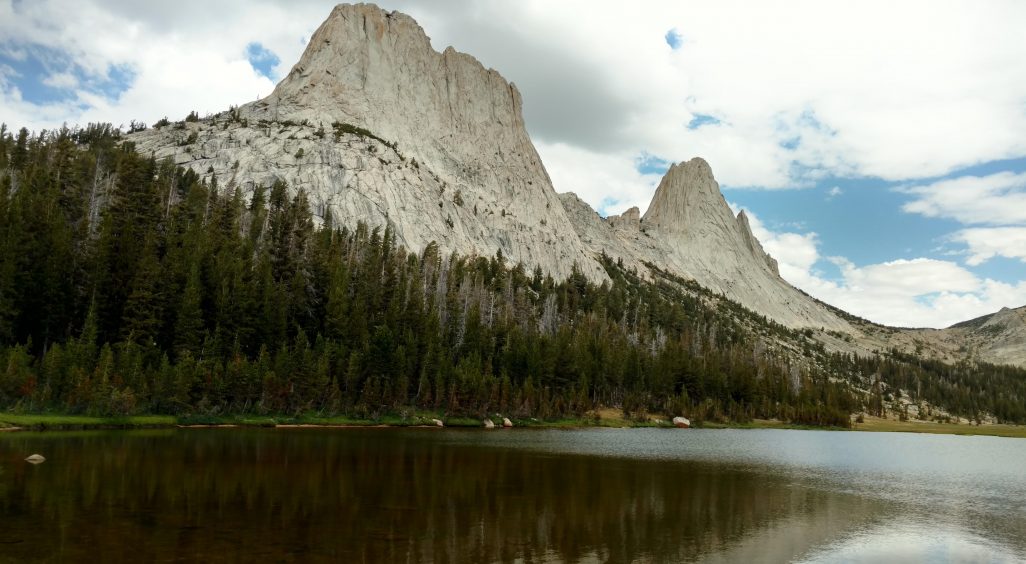 Summary of the Hike

Day 1: It was an easy hike to Elizabeth Lake, where we stopped to admire Unicorn Peak in the background. The official trail ended at the lake but an obvious use trail continued south toward the meadow, which was ringed on three sides by cliff walls. The trail became less distinct as we angled up the side of the the ridge in the Cathedral Range but enough of a faint rocky path kept us going.  We ascended opposite 11,000-foot Johnson Peak, looking back at it until we topped out at a notch that looked almost as high although we were nearly 1,000 feet lower at 10,200 feet.  We crossed a symmetrical sandy saddle that disappeared over the other side, pausing to admire the panoramic view of prominent peaks to the east and the perfect geometric shapes of feldspar at our feet. We descended into a narrow canyon, losing 800 feet of elevation to upper Echo Creek. The hill was massed with colorful wildflowers. We stopped for lunch opposite the Cockscomb, a dramatic rock formation at the top of a steep ridge on the opposite side of the canyon.  We found a use trail along Echo Creek that was easy to follow. The bug population increased dramatically and we realized why when we reached a boggy, wet section. When the steepness eased we angled east toward Nelson Lake, leaving the skeeters behind. We thrashed around in thick underbrush before breaking out onto smooth rock, ultimately finding another use trail that led us to Nelson Lake.

Day 2: We followed the creek draining southwest from Nelson Lake that ultimately joined Echo Creek. Following the topography at the creek junction, we made a wide U-turn, angling north to thread our way between two domes to peaceful Matthes Lake. The ascent was somewhat steep but the rock slabs were beautifully smooth and easy to walk up. On the final approach to Matthes Lake was a wide, flat sandy area that would be suitable for camping. We continued cross-country to Echo Lake. From there, we found a use trail that led to the John Muir Trail, which we followed to Cathedral Lakes.

Day 3: From Lower Cathedral Lake, we headed out the Cathedral Lake Trail/John Muir Trail to exit. On the way, we took a detour to Medlicott Dome to catch some fantastic views of northern Yosemite. We ended at our car parked on Tioga Road and finished up with a burger at the Grill (of course). 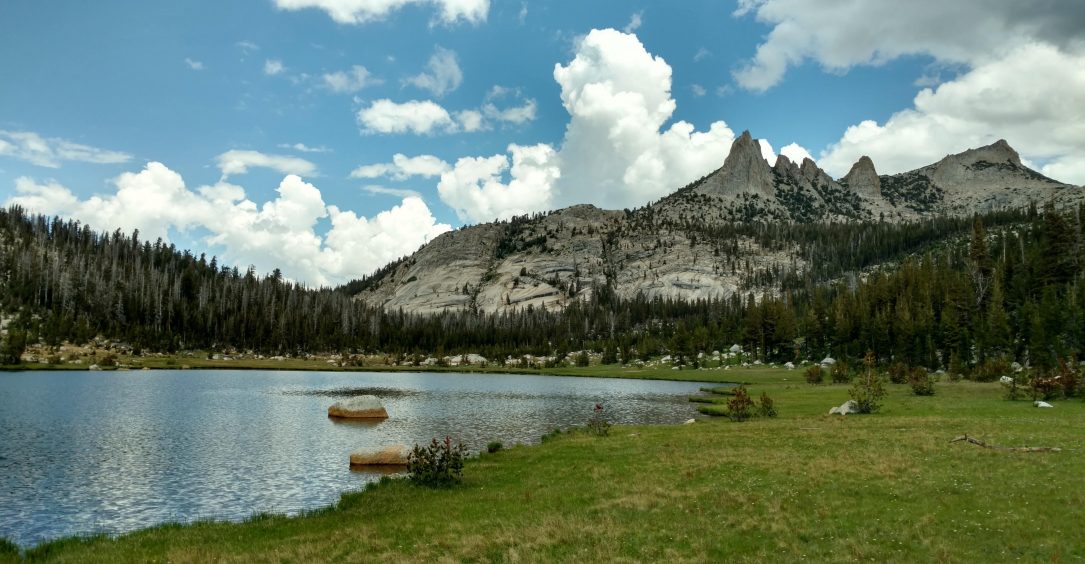 CalTopo Mapping Program is useful for plotting a route (I have purposely not posted our exact route to encourage cross-country exploration though I have marked several locations), Yosemite National Park 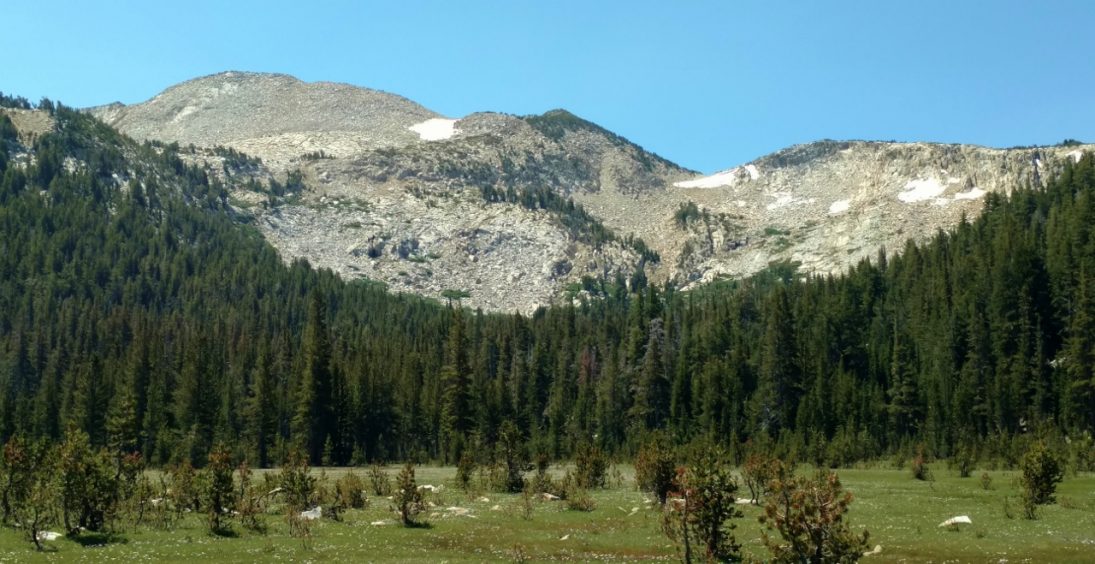 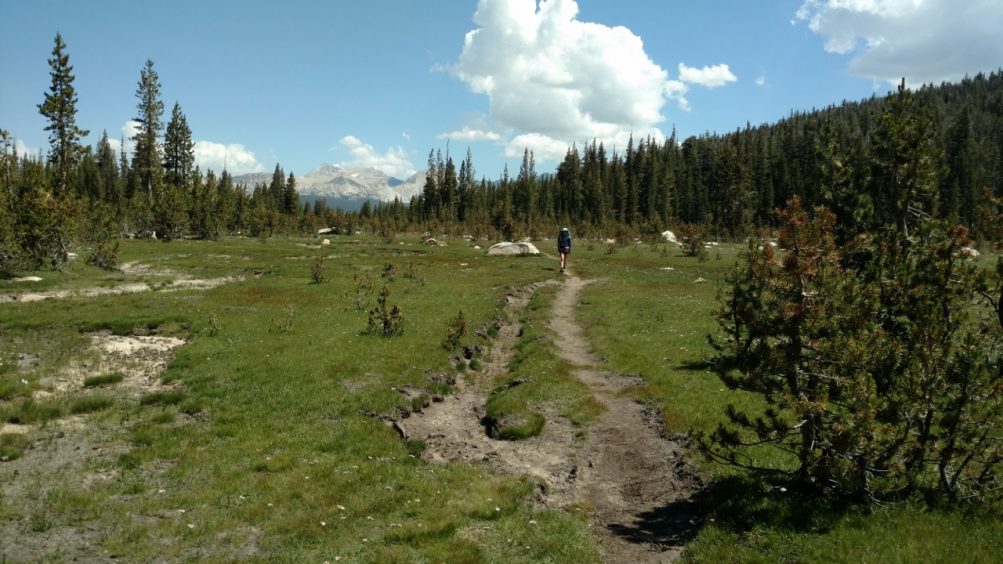 A well-worn use path continues beyond Elizabeth Lake 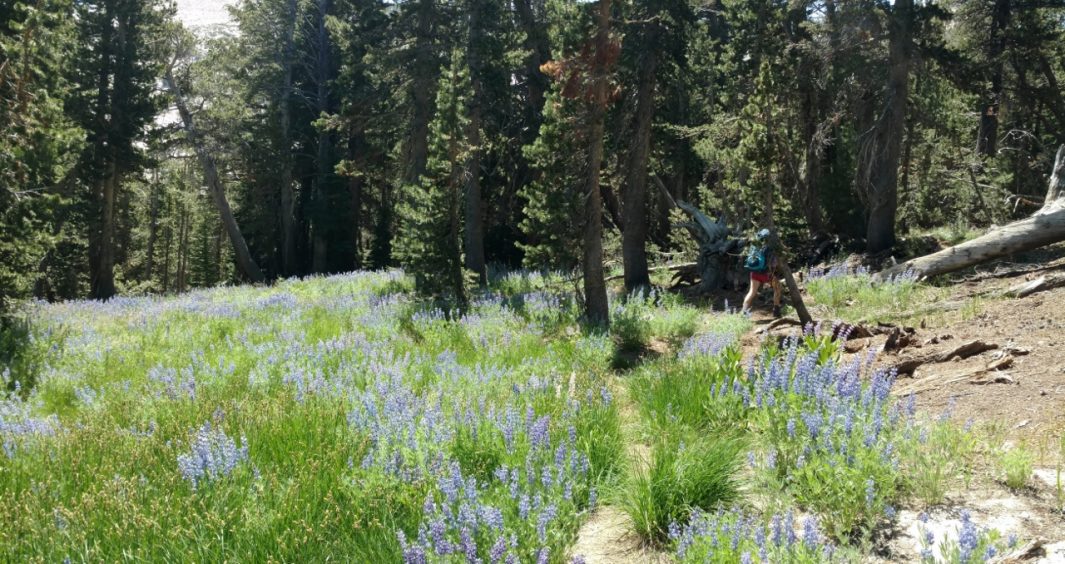 Leaving the track to begin our ascent among masses of lupine 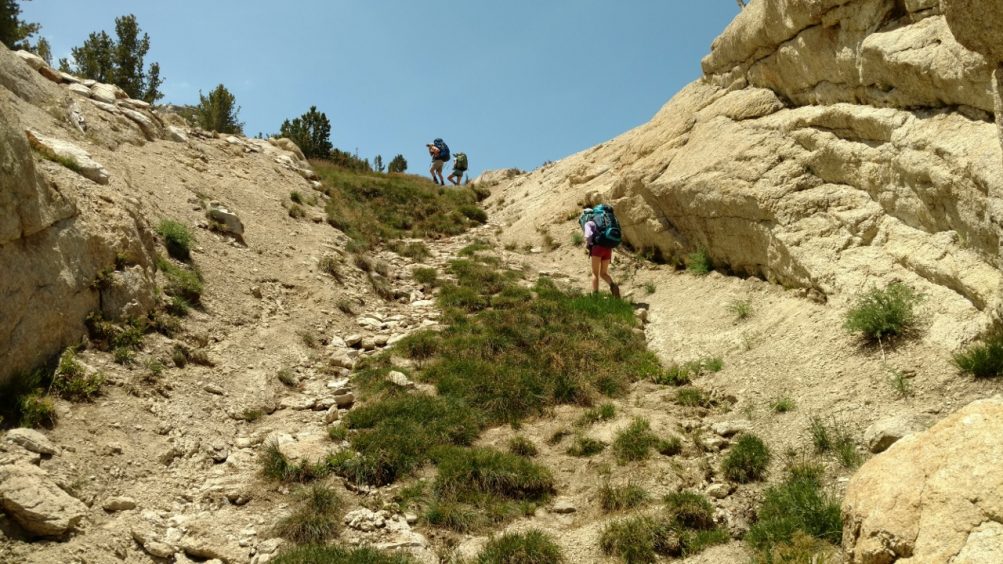 Climbing to the top of the ridge 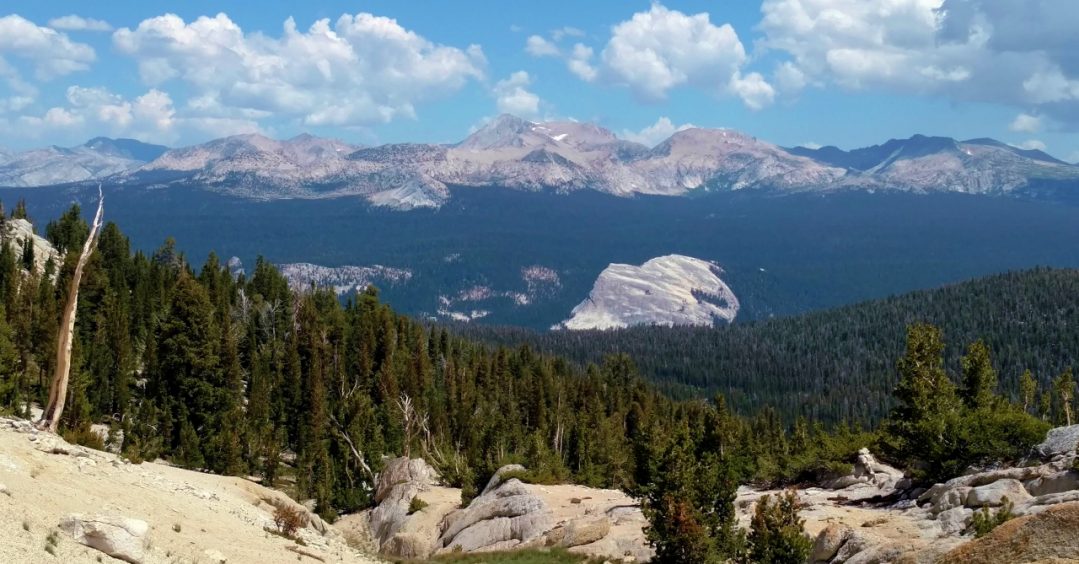 View of Johnson Peak and others from the pass 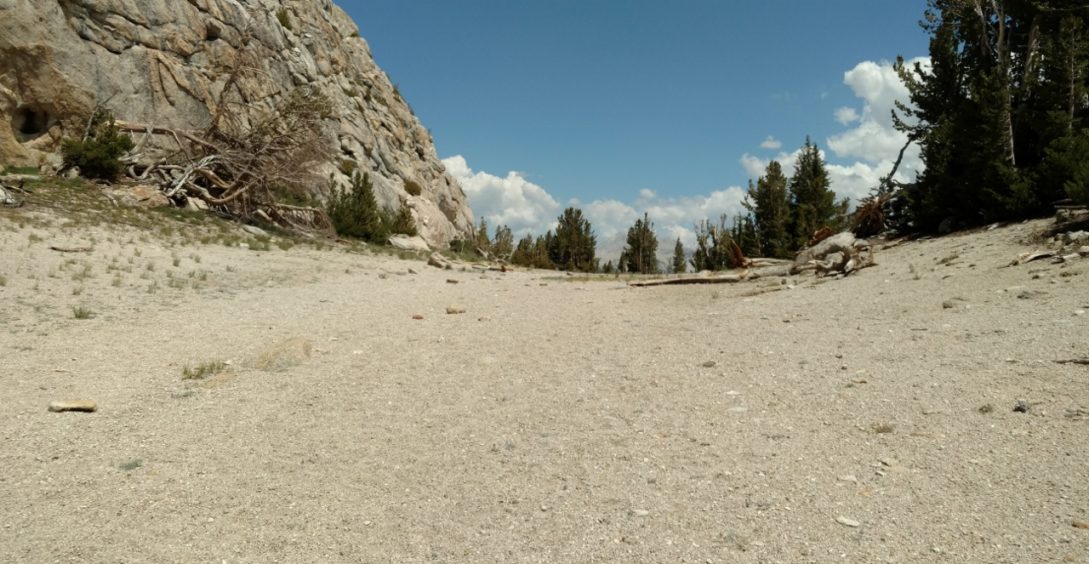 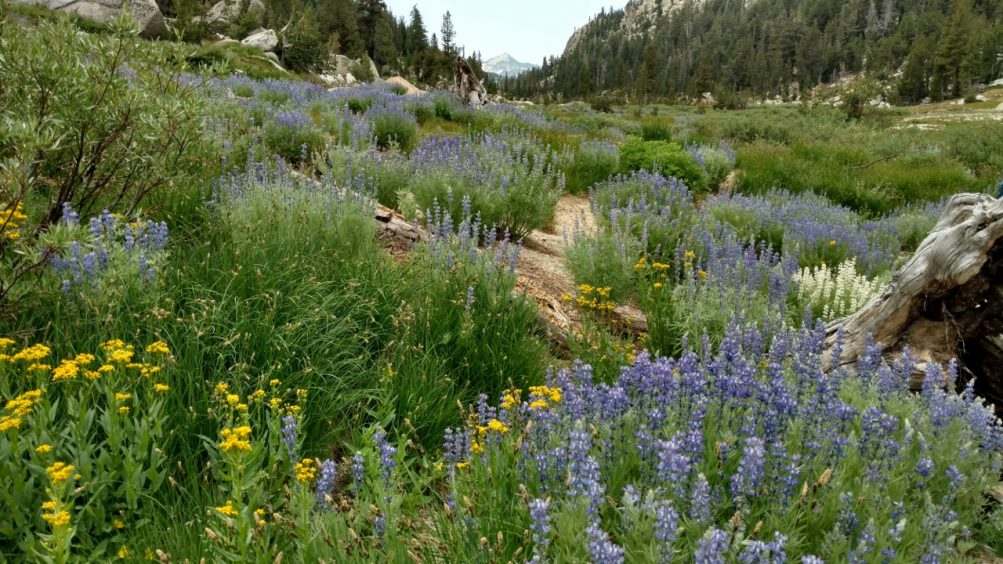 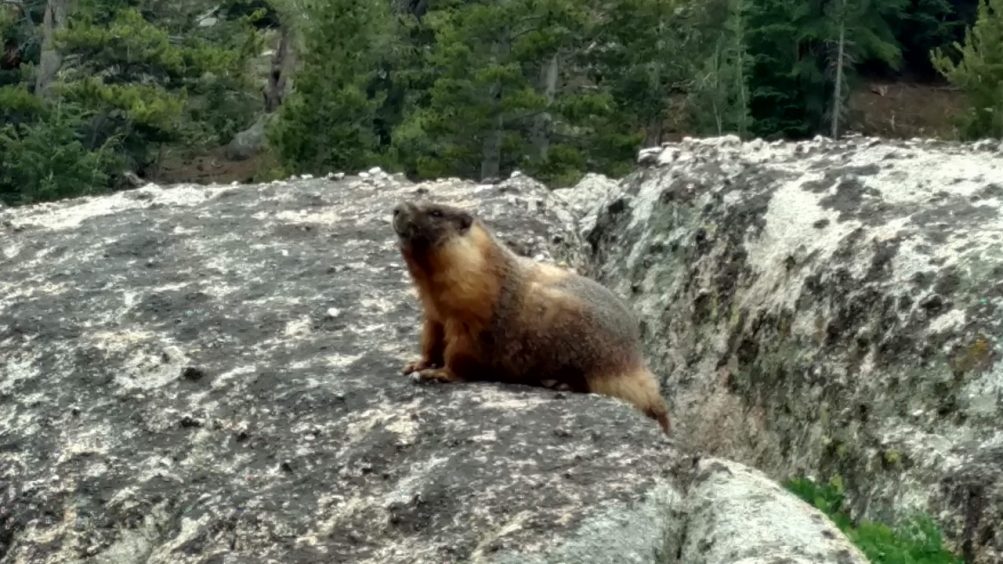 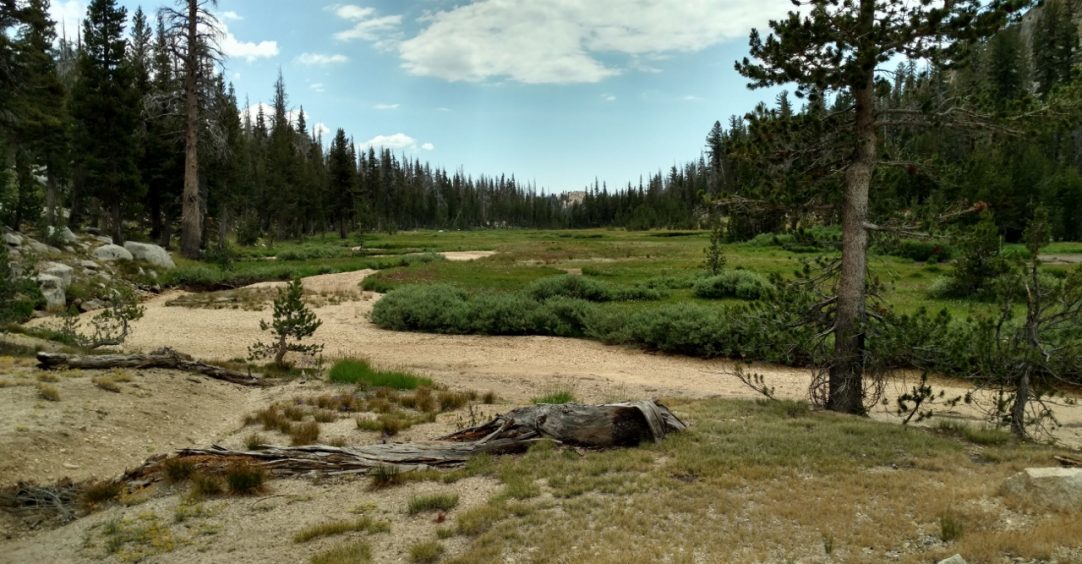 When the trail opened up and got boggy, we cut east (left) over a small ridge to Nelson Lake 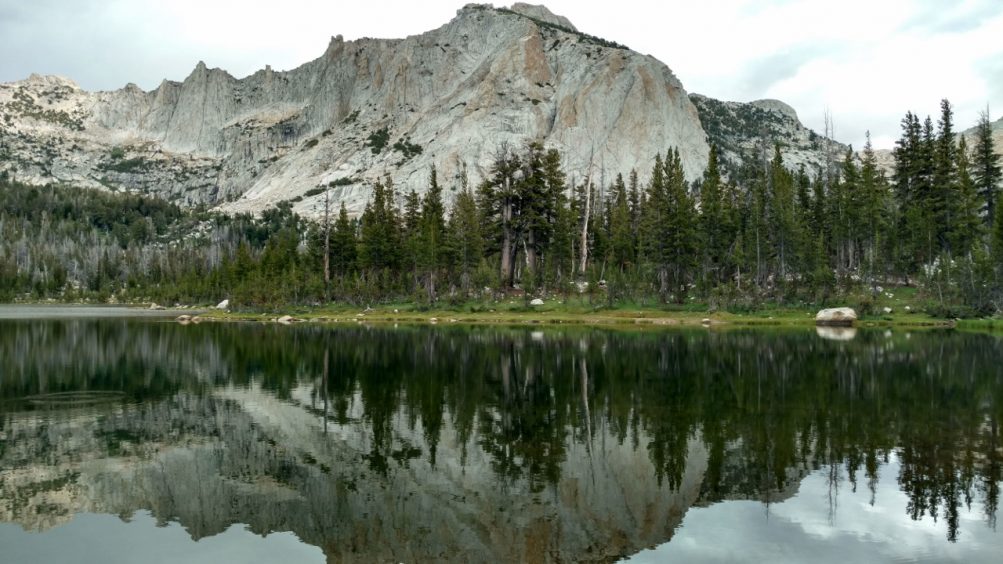 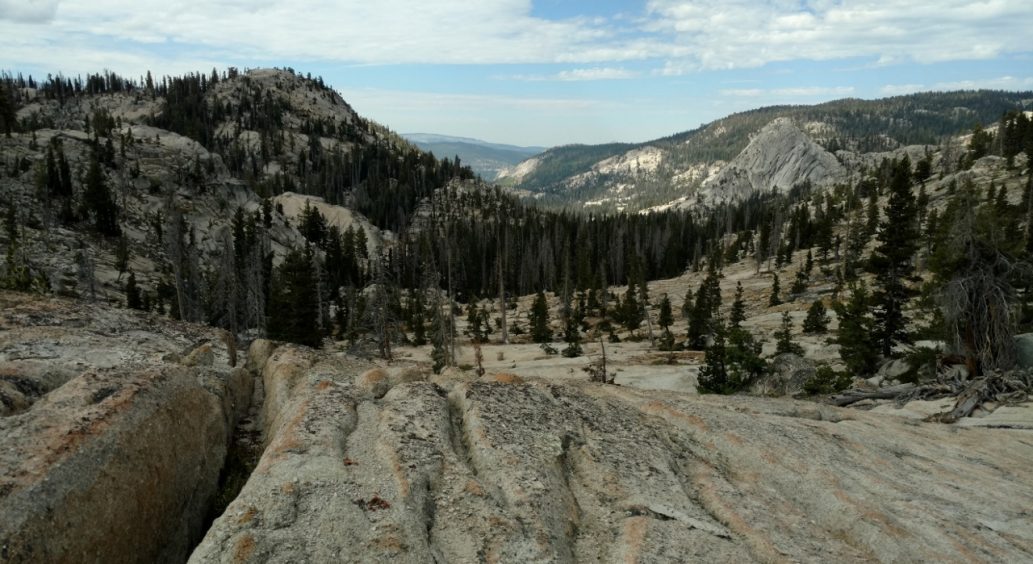 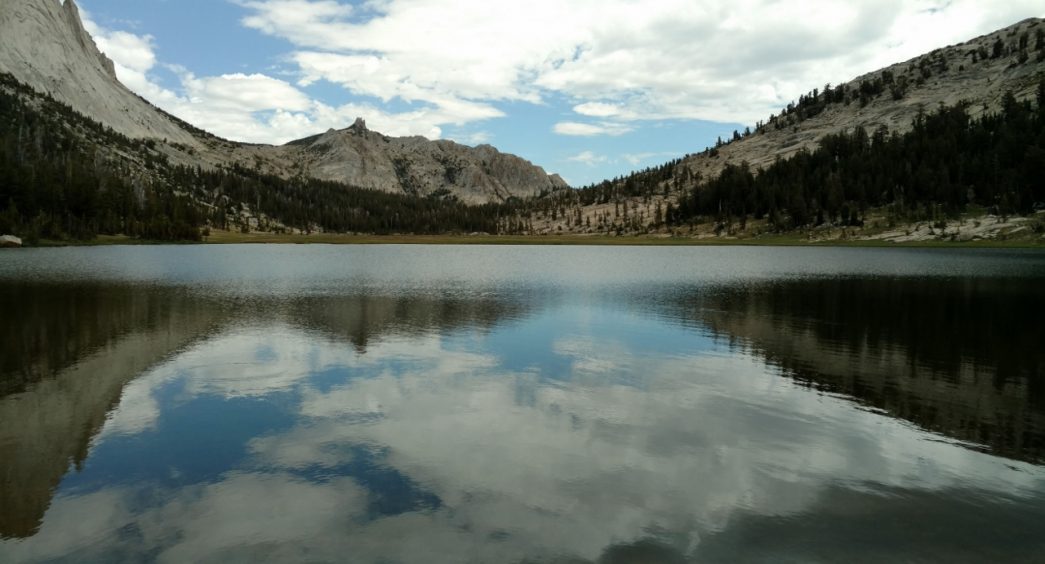 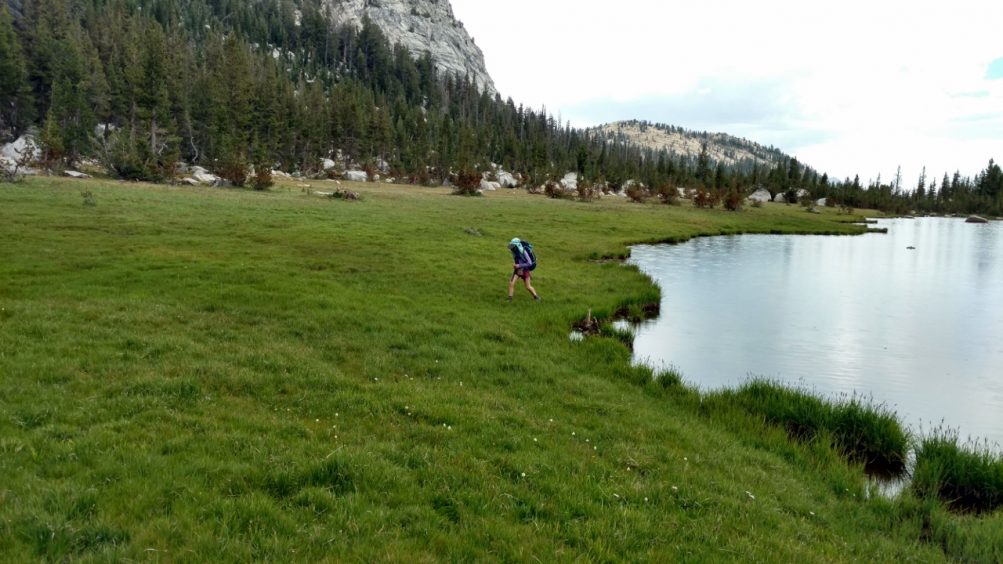 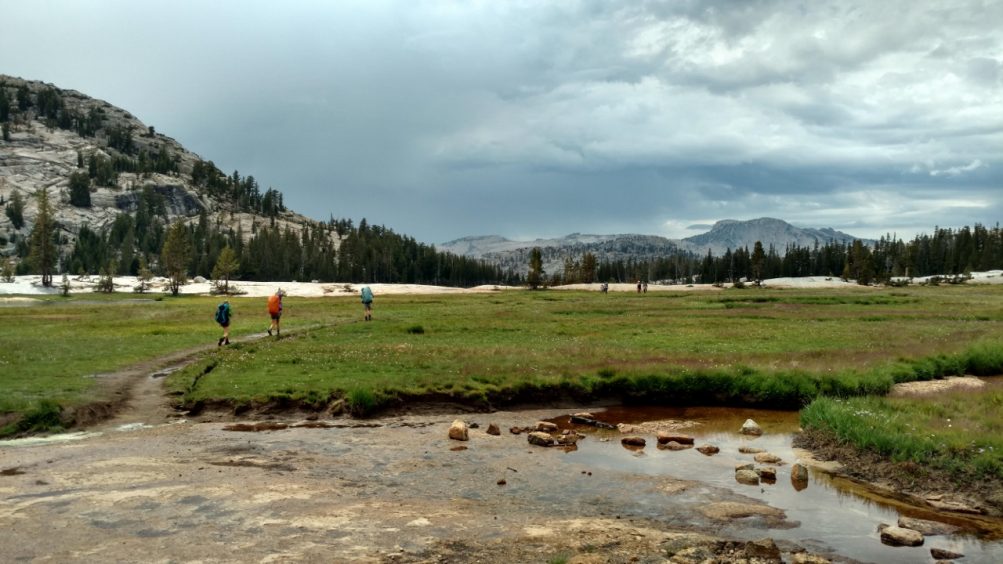 Connecting to the John Muir Trail from Echo Lake 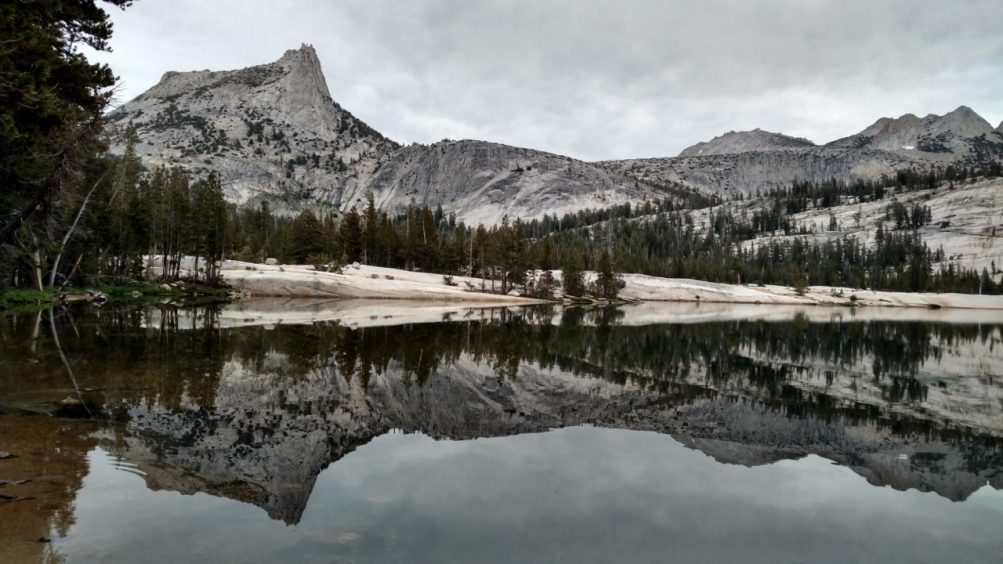 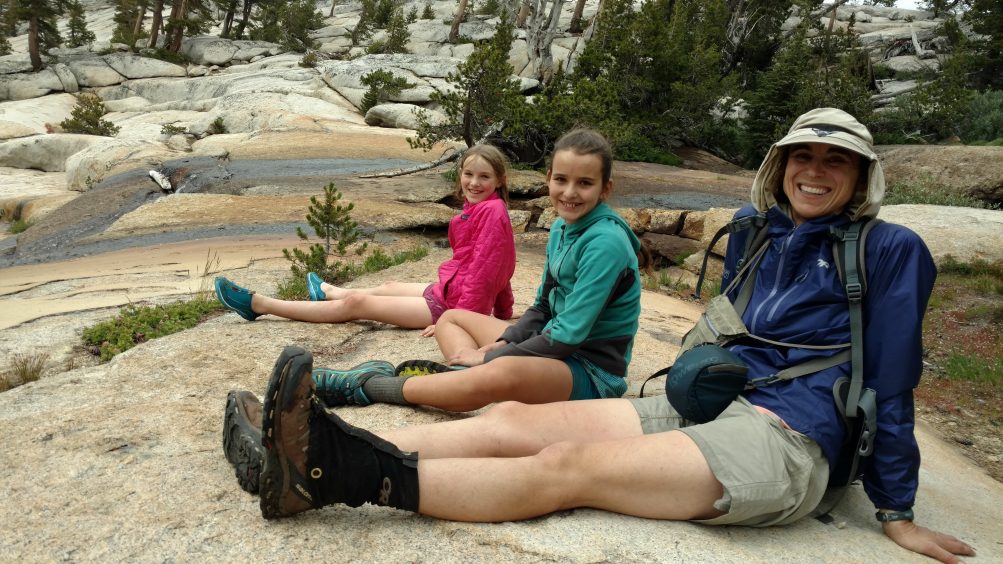 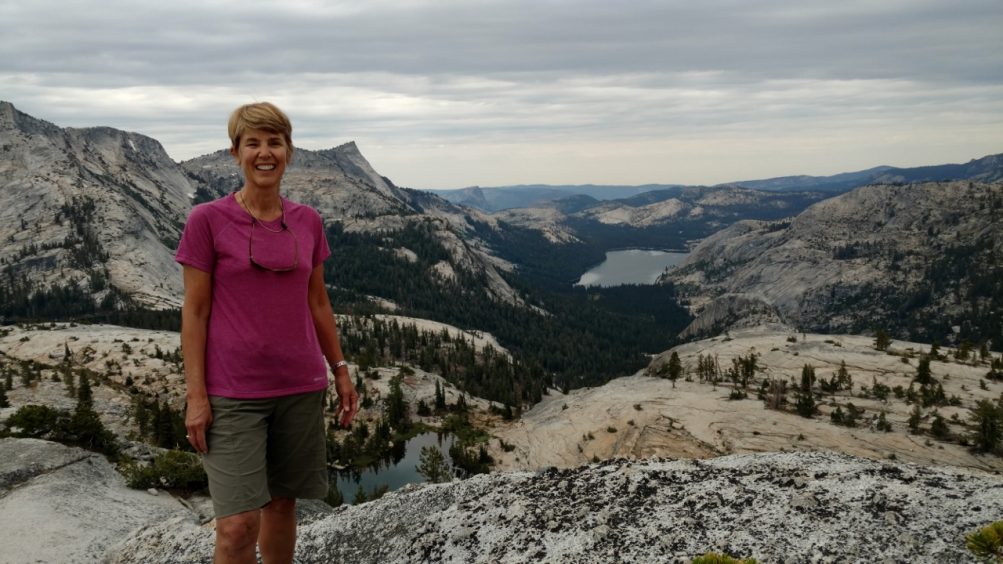 Planning a hut-to-hut hike on the Alta Via 1 in the Dolomites, Italy