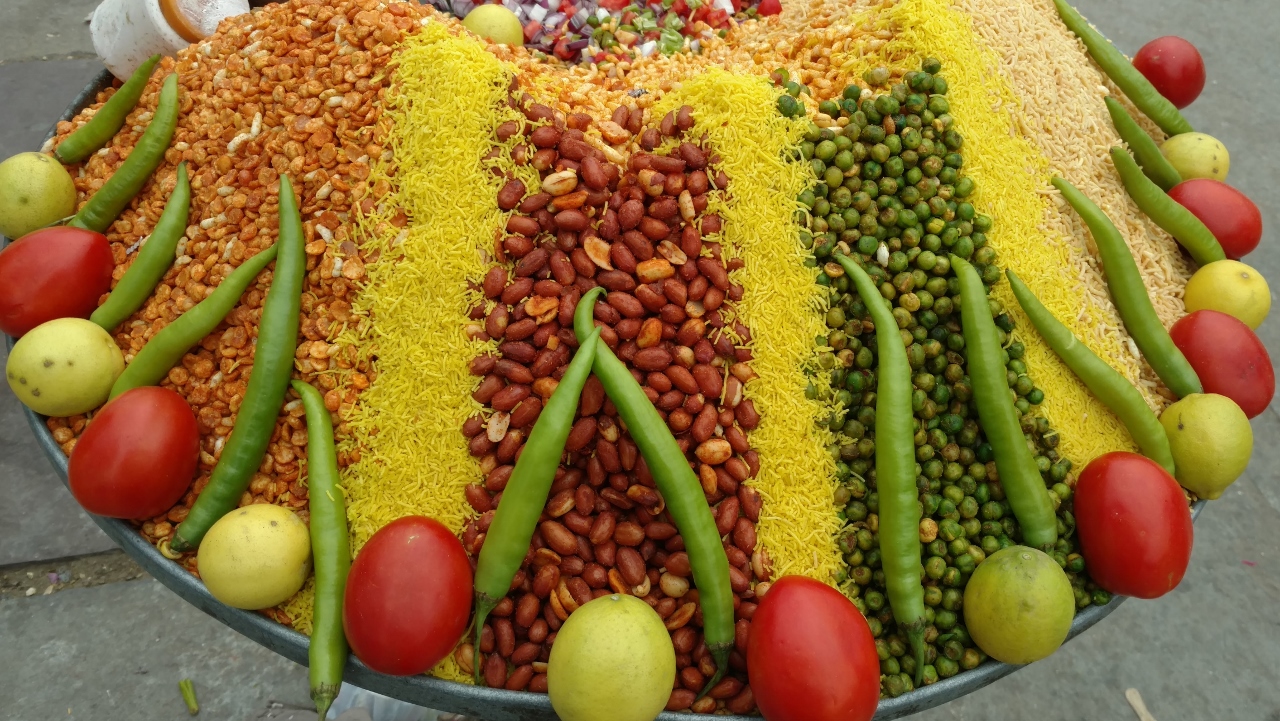 When Steve and I spent a month in India, I found that there was a lot I didn’t know about Indian food. If you like Indian food, you probably go to restaurants in the U.S. and if you’re like me, you always get the same few dishes you know you like. I was guilty of not paying much attention to the names other than the basics such as curry or tandoori. These are helpful for knowing the basic form and cooking methods but don’t get you very far if you don’t know some vocabulary about the ingredients. India is a huge country with many regional specialties. I acknowledge that I’m over-simplifying a complex topic. Hopefully, the information will aid the first-time traveler to Delhi and nearby environs in surviving the first week of reading menus in India, armed with a few key words.

Hindu is the predominant religion in India and most Hindus are vegetarians, though some may eat fish. Many restaurants are vegetarian only. However, there is a sizeable Muslim population that eats meat, usually chicken or mutton. If you see goat or mutton on the menu, these are usually Mughul dishes originating in the north of India, Kashmir and beyond. The cow is sacred to Hindus and pork is not consumed by Muslims; neither beef nor pork are generally found on menus. And, of course, several other religions are prevalent as well.

If you have an internet connection, you can look up menu items on the phone but we kept finding ourselves without the aid of Google. Even when I had internet, I discovered that Hindi- or Urdu-to English-translation was inadequate due to the widespread use of names from local dialects. In the north, many terms originate from Punjab or Mughal dialects. Around Goa, where fish dishes were prevalent, names may be based on the Konkani dialect. I found it useful to copy a few key terms into my phone so I could quickly identify foods to try. If we were at a buffet, I’d take a photo of the names of dishes to look up at the hotel. Once I knew the ingredients I liked, it was easy to pair with the type of preparation. Here are a few key terms to know.

A thali lunch is the Indian version of a bento box and was one our favorite meals. It’s a lot of food, though. Thali meals are generally served on a large tray with six different dishes. If we had a thali lunch, we often felt so full we skipped dinner.

Indian food is flavorful and complex but it isn’t light. It also isn’t bland, though spicy doesn’t always mean hot. If you are a person who prefers bland food or if you’re looking for light options that aren’t so filling, try these:

Breakfast buffets had me flummoxed in the beginning. The following items would often be grouped together and I’d never know what topping went with a particular base. A helpful waiter finally straightened me out.

A note about safety: I recommend following U.S. Centers for Disease Control guidelines (https://wwwnc.cdc.gov/travel/page/food-water-safety) for food and water while traveling. When selecting bottled water, make sure the seal is on the bottle to avoid re-filled bottles containing tap water and consider treating it with chlorine dioxide tablets or a SteriPen (an ultraviolet light device; https://www.katadyn.com/us/us/products/steripen#/1/filter?categories=46025) as some studies show that bottled water in certain countries are of varying quality. In general, you’re better off with carbonated beverages.

We weren’t expecting to drink much wine, usually preferring beer with spicy Indian food. In Goa, we discovered Sula Vineyards, an Indian wine that was quite good and we wished we had enough time to visit the Nashik region of western India where the winery is located. Steve gravitated toward the cabernet sauvignon-shiraz blend while I enjoyed the sauvignon blanc-chennin blanc blend that paired well with the abundant seafood.

Food is a big part of our enjoyment when we travel. It’s a gateway into the customs and traditions of a place and we have an adventurous palate. The fragrant, colorful, complex spices that form the basis for much of the food in India was a pleasure to experience with new flavor explosions every day. Once we learned to navigate the menu, we were up for trying just about anything.

All photos by Inga Aksamit.

A version of this article was originally published in International Travel News.

How to get a Permit to Hike the John Muir Trail