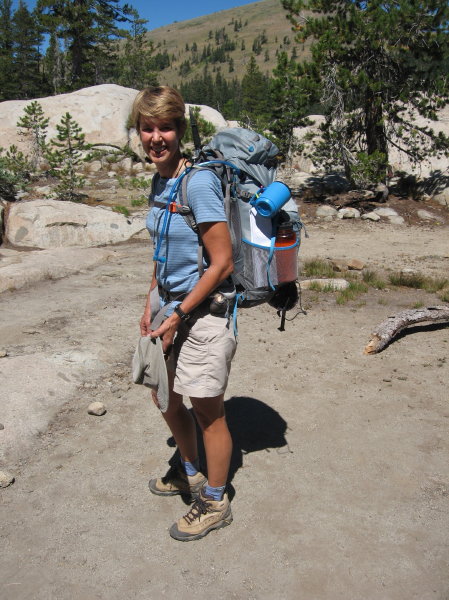 In Part 1, BACKPACKING WEBBER LAKE TO DONNER SUMMIT ON THE PCT, we trekked from near Webber Lake to White Rock Lake on a pleasant six mile stretch of the Pacific Crest Trail near Lake Tahoe. In Part 2 we set off toward Paradise Lake, where we hope that it will be warm enough to swim and the smoke from the nearby forest fires dissipates.

We woke to clear, brilliant blue skies as the wind had shifted the smoke during the night and had a leisurely breakfast of oatmeal for Steve, granola for me, rehydrated freeze-dried scrambled eggs for Laura (it didn’t look that appetizing but she seemed to enjoy them) and cereal for Chase. After breaking camp we made our way back to the PCT where we had left off yesterday. The trail continued to alternate between deep forest and open volcanic slopes offering a lot of variety and we enjoyed looking back at the high crest we descended from yesterday. After a couple of hours of hiking we came to the junction to Paradise Lake and turned left. Luckily we had been there before because the only sign was visible from the other direction, but not from where we were standing. We always think we’re almost there when we make the turn but the mile and half took us about an hour at our unhurried pace. 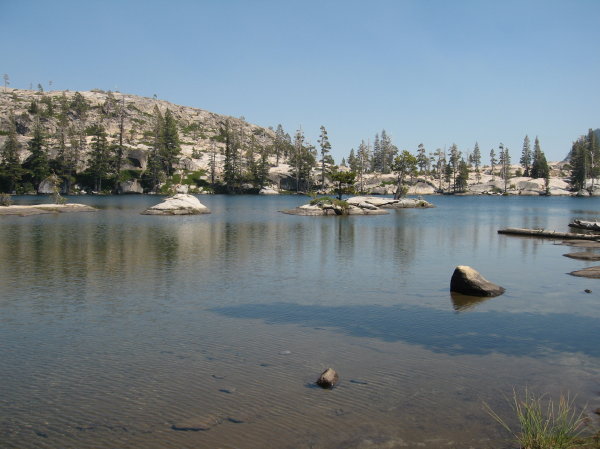 Paradise Lake is always a delight, like a Disney-fied ideal of what a mountain lake should look like. Smooth rocks line the near shore, dotted with stunted trees where various campsites are naturally designated by the shifts and turns of the granite, inlets and streams. The far shore is bounded by a protective ridge rising steeply from the edge of the water. Tiny islands scattered around the lake beckon though we all knew the water would be icy despite the warm air. Laura was brave, as always, plunging fearlessly into the bracing water. Chase followed, stroking easily toward an island, while I got in up to my ankles, then knees, then stomach, finally submersing myself to the neck, but no more. The cold bit into me leaving me feeling tingly and very alive. Steve followed sedately, calmly striding into the water. They all got out to frolic on the islands, laying on their stomachs on the warm rock, but I couldn’t conceive of getting warm and then cold again so I paddled around whatever island they were on, refusing to get out until it was for good. Chase kept yelling, “Come on, let’s go explore that island over there” but no matter how much he cajoled I kept paddling, accompanying him to each island. We watched Laura as she swam across the lake, no big deal for her being the triathlete she is. Finally we were chilled and, slithering as far as we could on the surface, finally had to squish the mud through our toes near the shore. We lay prone on the warm granite, gratefully absorbing the heat. 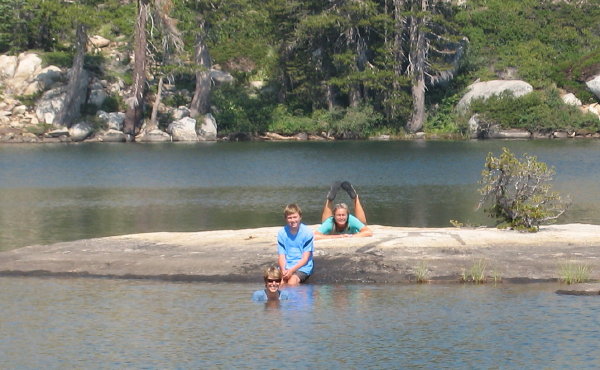 “Let’s go up there,” Chase said, still full of energy, pointing high up the high escarpment of the North Creek Canyon that towered over us a short distance away, an immense, jumbled rock wall hundreds of feet high that looked insurmountable. Except that Steve and I had somehow navigated down that wall a few years earlier, having stumbled across an improbable cairn. “Is that man-made?” I had asked. We didn’t know but we took a chance, then seeing another and another until we had successful descended that treacherous wall. It’s hard to imagine that this whole canyon was one filled with ice that reached higher than the rim.

“That’s a project for you and Steve some other time,” I said to Chase, not wanting to repeat that journey just now.

Laura said, “Let’s walk all the way around the lake,” which I thought was unlikely to succeed because of the thick brush at one end but we were game to try. Chase, Laura and I took off to explore while Steve reclined in one of the camp chairs. A huge rock formation blocked the end of the lake opposite the brushy end and we spent an enjoyable half an hour taking pictures as we searched for a way down, using some of our rock climbing skills, rusty for me, who used to top rope, and fledgling for Laura, who just had her first lesson a few weeks ago. Finding little toe holds and using cracks to push off we finally jumped down to solid ground. We climbed up a faint trail to the eastern ridge above the Paradise Lake to peer over the other side to see cliffs tumbling down to the glittering blue waters of Warren Lake, so close but yet so far away. Looking up we could see the smooth swale of the Round Valley Ridge between Basin Peak and Castle Peak dropping down a massive, crazy clutter of broken granite and shale to Warren Lake. Looking down from our perch were colossal, house sized blocks of granite. 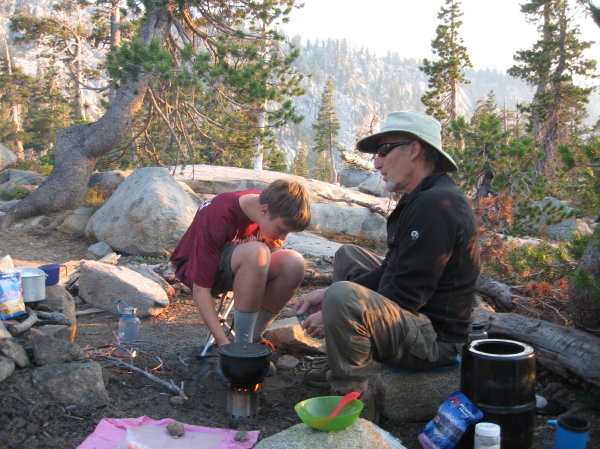 The guide book says there is a trail down to Warren Lake but it wasn’t obvious where that trail was. Retreating from the cliffs we continued circling Paradise Lake, coming to the rock wall we had seen from the other side, where the trail petered out. Persevering, we scrambled down a brushy slope, grabbing onto tough shrubs to control our descent, finally plunging down to another lakeside trail. We shouted over to Steve, who raised a hand to wave. Crashing through the brush we were startled to find a bushy mountain man lying in a crude camp, and clearly he was just as disconcerted to see people coming from an unconventional direction. We shot around his camp without a word and moved as quickly as we could through the dense brush, finding that the trail went right through the section I had been worried about.  We had all kinds of stories to report back to Steve once we got back. 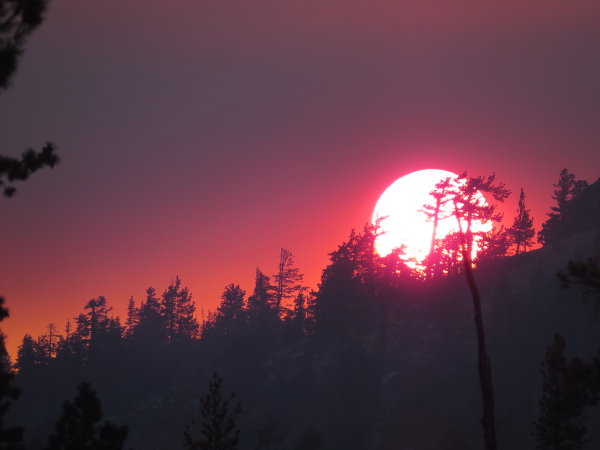 Brilliant sunset, enhanced by the smoke in the air from the wildfires (Photo: Chase Hovden)

We had taken lots of pictures when we had first arrived and later we were glad we did as the smoke started thickening and by evening it smelled like a campfire without having one. We rubbed our eyes and hoped the morning would be clear, which seemed to be the trend. We cooked up some freeze dried spaghetti and I enjoyed my cocktail of a vodka and Tang—refreshing! Happily we didn’t see the mysterious mountain main across the lake again during our stay.

The next morning didn’t disappoint, with clear skies once again. We packed up quickly made good time on this part of the hike that we had done a couple of times before. Stopping for lunch at the Peter Grubb Hut, which unfortunately was boarded up with a notice that repairs were needed, we ate peanut butter sandwiches and reminisced about previous trips we had taken together in this area. Knowing that we had only one more push to get to Castle Pass before we were home free, with only the easy descent to the parking lot, we set off with a light step. When we reached Castle Peak we all agreed that it had been easier this time and were in high spirits as we started down. Unfortunately we mis-gauged this section, which took a little longer than we thought, and all of us ran out of water. We kept thinking maybe we took a wrong turn, though we didn’t, but that didn’t help our plunging morale. It was a good 2 miles longer than we had in our minds, so even though it was easy hiking and we could hear the roar of Interstate 80 we were all droopy by the time we got to the car. A hearty meal of a gigantic BLT and even larger wedge of chocolate cake at the Wild Cherry Coffee House in Truckee put us all right and by the time we drove back to our starting point to retrieve the car we were already chattering about future hikes. We were glad this one was behind us though, as the smoke was very thick when we got to the car. 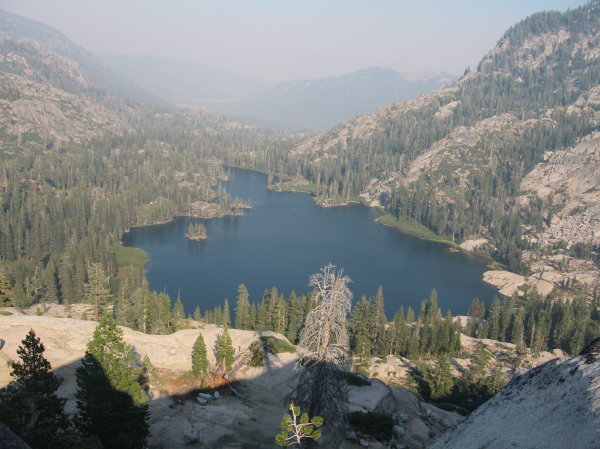 Chase was a delightful hiking partner who stayed enthusiastically engaged with all of us and his surroundings the whole time. Laura, who has hiked about 100 miles this summer, is beyond ready to hike the John Muir Trail with us next year—I think she keeps her pack loaded next to her bed just in case there’s a backpacking opportunity. Steve will be poring over the maps, plotting out resupply points and daily mileage goals. We’ll be dreaming about our plans for our most epic backpacking trip over the winter as we stow away the camping supplies to wrap up another successful season so check back later to see how our preparations are coming along.

The 20 mile section between Forest Service Road 86 (between Webber Lake and Meadow Lake) and Donner Summit is a great 2-day backpacking trip that is not overly strenuous (relatively speaking) and has beautiful lake-side campsites at White Rock and Paradise Lakes. Though much of it is not in true wilderness, being served by jeep roads, it’s relatively untraveled. The terrain is varied and sweeping vistas are frequent.

Permits are not required for overnight visits in this area. However, California Campfire Permits are required if using a portable campstove for cooking or building a wood fire. Permits and information about current fire restrictions are available from any Ranger Station or California Dept. of Forestry office.  Permits are available online at the Forest Service website  after completing a short, 4-question quiz. 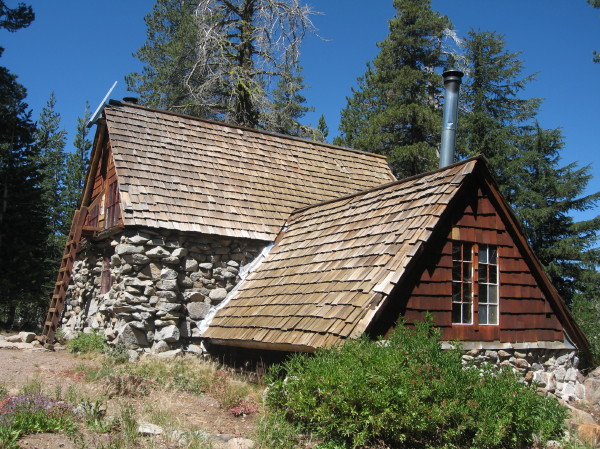 Start: To reach the trailhead near Meadow Lake from Truckee, CA (near Webber Lake):

Backpacking Webber Lake to Donner Summit on the PCT-Part 1

Backpacking with kids in Tahoe-Tips for success