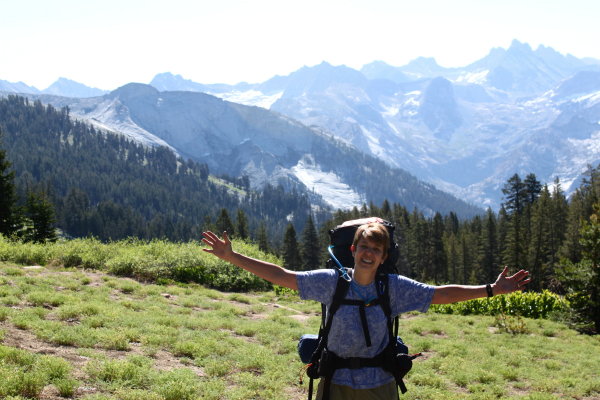 Inga at Alta Meadow, with the Great Western Divide in the background (S Mullen)

We rounded the corner, and after a stretch of densely forested trail, broke out into Alta Meadow. Though my feet were aching after trekking 5.6 uphill miles with a heavy pack, I practically ran toward the meadow, arms outstretched in my Julie Andrews Sound of Music moment. The vista before me made me gasp, and after a week of looking at the craggy peaks of the Kaweahs and the Great Western Divide I now felt like I could reach out and touch them. What a spectacular spot to camp for the night. I threw my pack down, and with the lightness of an angel I scampered toward the peaks with my heart singing, because if you’d ever heard me sing you’d know that that would break the spell instantly. I couldn’t wait to climb Alta Peak, but that would have to wait for morning.

When Steve and I were planning our trip to Sequoia National Park we thought it would be a good idea to explore some new terrain with our packs. After making a few phone calls I was put in touch with Yogi Bair (I’m not kidding) a 20 year resident of the park who has the enviable habit of spending three months every summer trekking through the backcountry of Sequoia. He must know every nook and cranny of the park. After a few emails back and forth he recommended the Alta Peak Trail for its beautiful view and relatively untraveled trail. Clearly he knows his stuff because he couldn’t have been more right on both points. 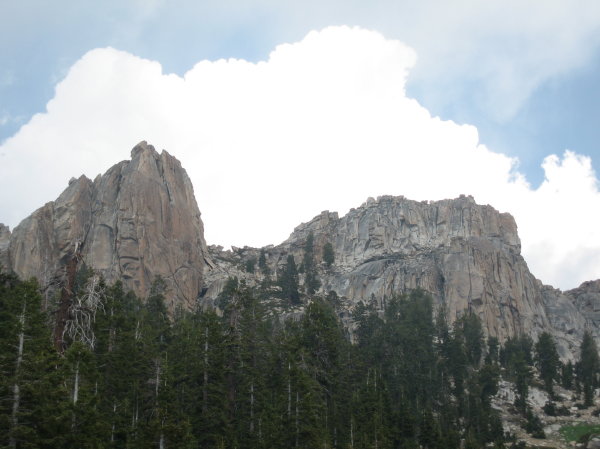 The day dawned clear and bright without a cloud in the sky, but after spending a few days in the park we knew that didn’t mean much and that nasty squalls tended to move through the area by mid-afternoon. After a good night’s sleep and a hearty breakfast buffet at the comfortable Wuksachi Lodge, we slung our packs on our backs and looked up, way up at the mountain tops. Starting the trek at Wolverton we walked the first couple of hours up a fairly steep grade through thick forests, occasionally meeting other day hikers and pack mules. It was pleasant to walk through, bordering a gushing river much of the way, but not particularly dramatic. After 2.7 miles we broke out of the forest at Panther Gap to gaze at a panoramic view of the familiar face of Castle Rocks and the Great Western Divide, now so much closer than we experienced lower down the mountain. A well-constructed fire ring showed that the commanding view had enticed campers before us to bed down there, but the lack of water made it a less than appealing choice, plus we had many more miles to walk. 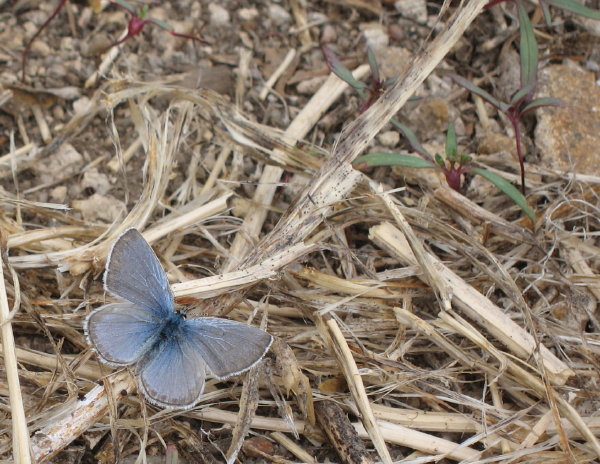 Butterfly on the trail (I Aksamit)

We pushed on through a less vegetated, sandy part of the trail where a few narrow sections gave pause as a slip could mean a nasty, quick descent down steep, smooth cliffs angling down hundreds of feet. The openness of the terrain made for gratifying views and quite a few photo stops. Finally we could gaze to the west and see the dark curve of the top of Moro Rock, where we had stood a couple of days earlier, peeping back at us from 6,725 feet, becoming more prominent as we gained elevation.

Encountering a junction with the Seven Mile Trail we consulted the map and turned left, toward Mehrten Meadow. The trail quickly became more forested again and soon we were in a pleasantly cool, shady stretch where the trail curved around small Mehrten Meadow that receives the bounty from a couple of small streams. Several obvious campsites were nestled between the creeks, which we made note of. 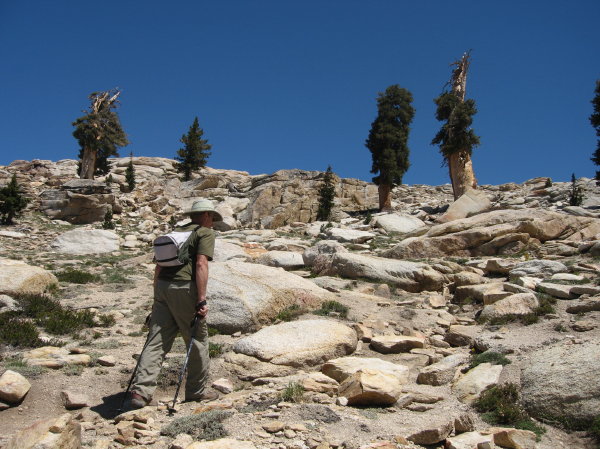 Trees are sparse near the summit (I Aksamit)

After climbing a bit more we shortly found ourselves at the junction to the Alta Peak trail, the domineering faces of Tharp’s Rock and Alta Peak looming high overhead. Keeping an eye on the developing puffs of clouds we pressed on to Alta Meadow, hoping to find a good water source, and were rewarded with a decent sized stream not far from a crest on the hillside, beyond which lay the expansive Alta Meadow.

It was here that I had my Sound of Music moment, for after trudging many long hours I was incredulous at being in the center of a colossal amphitheater, the gentle green meadow ringed with peaks of titantic proportions, like a dramatic movie backdrop painted on canvas. It was impossible to drink it all in so I helped pick out our campsite from an embarrassment of spacious choices and couldn’t wait to put on my camp shoes and scamper around, sans the heavy weight on my shoulders.

We had the place to ourselves, a gigantic flat campsite that dwarfed our tiny tent. Stretching out toward the Great Western Divide, screened by trees, the mountain dropped away suddenly to a deep canyon below, offering an airy perch from which to explore. Though the campsite was fortified by a partition of trees the nearby meadow opened up to a verdant pasture under the watchful eye of bulky Alta Peak. Just beyond the peak was a vast and ominous looking shale slope. I followed the path to the bottom of the meadow where a pile of brushy sticks marked an abrupt end to the maintained trail, but it was obvious that a faint social trail continued on. We had heard that there are unofficial trails that connect to other hikes so I followed the track for a short distance but a crack of thunder put an end to my explorations and I hurried back to our camp. No sooner had I arrived at the tent when the first fat drops fell and we were treated to an air-cleansing soaker that lasted about an hour—perfect time for a nap. 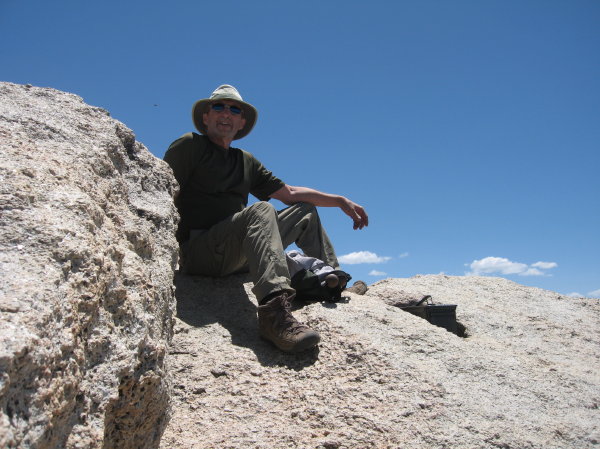 Steve on the summit (I Aksamit)

The next day the skies were even bluer than the morning before, thanks to the windexing effect of the storm, and we packed up our camp. Returning to the Alta Peak Junction we stashed our heavy packs in the woods, continuing to the top with a light day pack.  The hike to the summit was steady but not difficult, and the vivid views changed constantly as we spiraled around the mountain, first looking over our campsite of the night before, then curving east and up. We felt the altitude as we approached the summit at 11,200 feet, gasping for big gulps of the thin air. The last hour or so the trail crossed slabs of granite with well-placed cairns (small stacks of rocks) marking the way. The last ten steps involved climbing up some large boulders to get to the true summit, where we found the register nestled into a depression in the rock. From here the 360 degree view was unbeatable. In addition to the aforementioned Kaweah’s, Castle Rock  and the Great Western Divide, mighty Mount Whitney was visible in the distance, over 70 miles away. Below and to the east Pear, Emerald and Aster Lakes could be seen clearly, with the barren Tablelands stretching out across the land. To the west, thanks to the clearer air, we could see much farther into the smoggy San Joaquin Valley than in previous days.

I was very excited to sign the register as it was our first “bagged peak” with an official register, though the exposed perch felt too airy for me.  I descended to more secure spot to dig into my snacks from my day pack, keeping a close eye on a peak-bagging marmot who looked a little too interested in my energy bar. 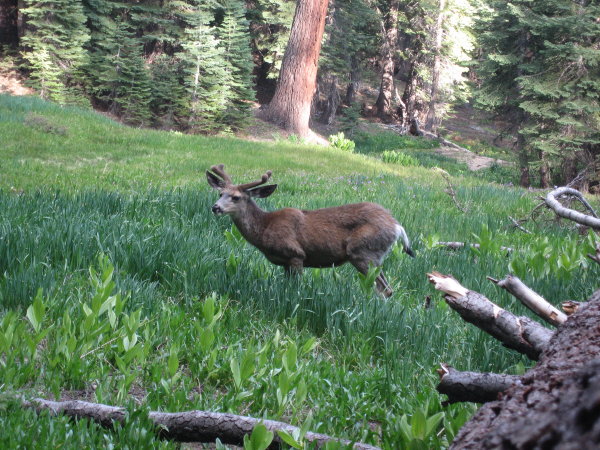 After a well-deserved rest and bite to eat we made our way down to retrieve our packs, then continued on to Mehrten Meadows, where we set up camp for the second night. We weren’t sure it was a good choice at first, as the trail curves right around it so it doesn’t feel very private, but after the herd of day hikers passed through it was calm and peaceful. We thought the mosquitoes might be bad with the damp meadow and two streams but they were fairly mild in numbers and activity. And finally, I felt a bit hemmed in after the broad expansive views we had had at Alta Meadow and on the peak. This site is heavily screened with tall trees. However, when I sat down by the fire ring I was astounded at the view—the notch made by the stream perfectly framed a single peak in the distance creating a beautiful scene, and as the sun slowly set the slanted shafts of light filtering through the trees were magical. The meadow was full of wild scallions, and was effectively a big bowl of dinner for a group of unbelievably tame deer, who fed several feet from our campsite for hours, even the young buck completely unmindful of our presence. The next morning I heard a muffled grunt and toe tapping, only to find the deer back for breakfast.

I would highly recommended the hike to Alta Meadow and Alta Peak for the spectacular views, well-marked trail and comfortable campsites within easy reach of water. The hike itself is strenuous and steep but is not unmanageable if you’re in shape, used to hills and easily distracted by magnificent vistas.

THE WONDERS OF SEQUOIA NATIONAL PARK

To reach Sequoia National Park from San Francisco by car (approximately 5 hours, depending on traffic and weather): 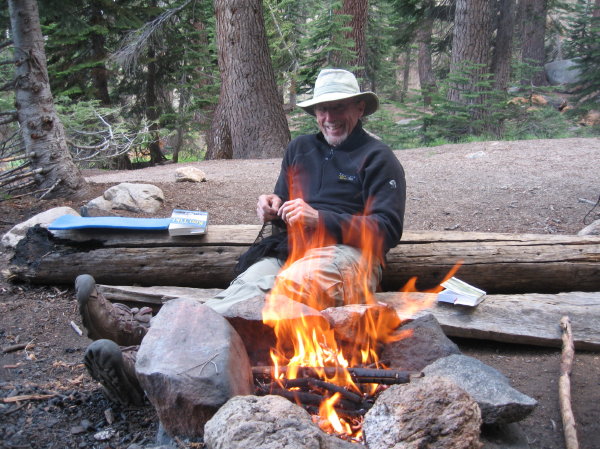 Steve enjoying the campfire (I Aksamit)

The transformation of the Presidio of San Francisco