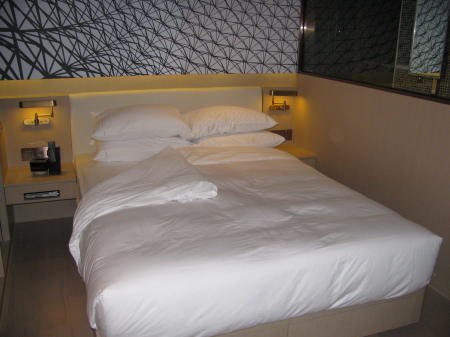 We stayed in 2 hotels in Hong Kong as it was a bit challenging to find rooms due to the humongous jewelry show that was going on. Both the Hotel de Edge and Courtyard by Marriott were located in the Western District adjacent to the Central District, and were both sleek and modern. Rooms in each were characteristically small as space is at a premium in Hong Kong, but very well appointed. The Courtyard in particular is like no Courtyard in the U.S., being more akin to a full service Marriott in the states. In the Hotel de Edge we had a fantastic view of Victoria Harbor, while at the Courtyard we had a view of Victoria Peak, partially obscured by other high rises. You can read my review of the Hotel de Edge on Examiner.com or Trip Advisor.
The primary business in the Western District is dried fish commerce so the area is tinged with the faint odor of seafood, pungent but not unpleasant. The open front shops provide many photo ops, with stacks of unusual dried seafood, which is used to flavor many dishes. Getting to the Central District, which is the financial nerve center of Hong Kong, is easy on the historic double decker trams that trundle across the entire waterfront all day. In general, rates are a bit less dear in the Western District compared to Central, and I prefer to be on Hong Kong Island rather than Kowloon. 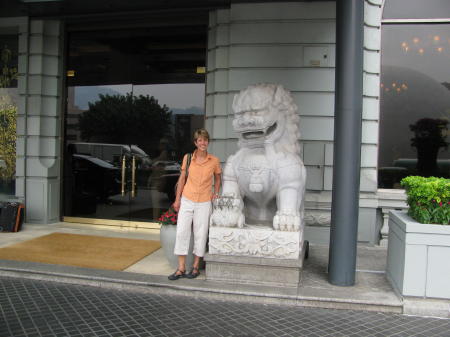 Inga in front of the Peninsula Hotel (Steve Mullen)

We went to the Jade Market in Kowloon, across Victoria Harbor, and thought we’d pop into the venerable Peninsula Hotel as I have childhood memories of a major meltdown in this hotel, when the staff patiently cajoled me out from under the dining table by showing me how to make origami. Apparently it’s too venerable for us, because we were summarily turned out of the bar for violating their dress code—no flip flops. One in our party was wearing nice flip flops while another had a wedge style flip flop, but really all of us were a bit casual (some might even think sloppy) for a grand hotel. If you subscribe to my pack light strategy, this is the downside, which is you probably won’t have clothes that are appropriate for a five star hotel that keeps to colonial-era dress codes.

We used points for the Courtyard. It’s hard to get a deal in Hong Kong so it’s a great place to use points. The lower end looks like it starts around US$125 and it goes up from there. The rack rate at the Peninsula is US$640 a night for a standard room; US$1,900 for a deluxe harbor view room.

Lots to do and eat in Hong Kong