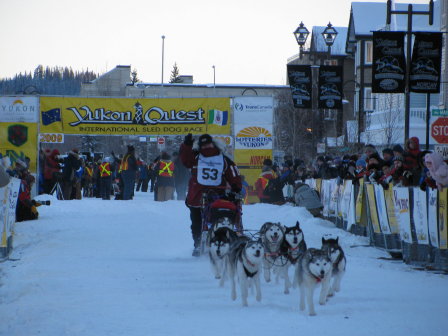 The start of the Yukon Quest in Whitehorse, 2009

It’s almost time for the annual running of the Yukon Quest, a 1,100 mile dog sled race that rivals the Iditarod in length and challenge.  The race alternates each year between Whitehorse and Fairbanks, AK, and race organizers from both Canada and the US are busy every winter preparing the remote course in their respective countries.

Girdwood, Alaska
Steve and I became fascinated with dog sledding adventures when we lived in Seattle and began visiting Alaska and the Yukon. On my first winter trip to Alaska more than 10 years ago my number one goal was to go dog sledding. I was like a kid anticipating Christmas as we made our way to a large meadow on a crystal clear day in Girdwood, near Anchorage, to go sledding with Chugach Express Dog Sled Tours (since closed). We were the only people in the meadow and I could barely contain my excitement as we climbed into the sled. The dogs were smaller than I expected, and we learned that most sled dogs are mixed breeds, taking advantage of different traits. Purebred huskies or malamutes are rare among elite racing teams due to their larger size, but many sled dogs do have husky or malamute heritage.

The runners on the sled ran smoothly on the cold, crunchy snow as the dogs loped around the meadow. We noticed the different characteristics of the dogs on the team, and Shy Girl was being tested in the lead position.  The lead dogs are selected for their intelligence, calm attitude and ability to follow directions. The wheel dogs are positioned closest to the sled and their brute strength is crucial to pulling the sled through deep snow. The team dogs are selected for endurance and ability to work as a team.

The dogs were howling with joy to be out in the fresh air and started pulling forward the second the brake, a metal spike jammed in the snow, was released. We were off! Tails up, the dogs trotted along, obeying “haw” and “gee”, commands for turning left and right respectively. We learned to appreciate the “on by” command to keep the team going on by any kind of distraction, such as the side trail back to the kennel or some tempting movement in the trees. We were so excited when our guide let each of us stand on the runners with him, one at a time, to get the feeling of running the team. That two hour experience was thrilling and made me wish we lived full time in the snow.

Jackson Hole, Wyoming
A couple of years later we were skiing at Jackson Hole, Wyoming in brutally cold weather. It was a low snow year and we were looking for some alternate activities when I saw a brochure for an all day dog sledding trip with Jackson Hole Sled Dog Tours, operated by veteran Iditarod racer Frank Teasley. We went with friends, Jay and Laureen, arriving at the dog kennels in minus 13 degree weather, clad in our warmest ski gear. Over that we donned thick, warm parkas and heavy boots.

On this trip we were assigned one guide for two dog teams. Slowly it dawned on us that we’d be running our own team the whole day.  Laureen and I each slid into a sled and were covered with blankets while we received a brief instructional session about dog commands and braking. While the guide was handling our team I looked over and saw Laureen, strapped into the sled with her arms in the  sled bag tipped over on her side with the dogs running loose.  She was laughing convulsively but it didn’t look good for her team. The guide sprang over to her sled, got the dogs untangled, set the brake and gave Jay strict instructions about holding the team. Laureen got re-positioned and the guide stayed with that team for a couple of hours. We took off through beautiful forested lands with the air in our face. Despite the extra clothes and blanket I was cold so the guide encouraged me to disembark and run alongside the team to warm up, which worked perfectly. We took turns running the team, bundling into the sled and running alongside for the rest of the day.

At midday we arrived at the natural Granite Hot Spring, changing out of endless layers of fleece and long underwear into swim suits in a minimally heated changing room, running as fast as we could to plunge into the hot water, an invigorating experience to say the least. Reluctantly we exited the hot springs to reverse the process, finding a gourmet picnic lunch laid out by the guide. Temperatures had warmed up to about minus 5 degrees, so lunch had to be consumed quickly before the trout and carrot sticks froze solid. We didn’t tarry long, anxious to try our newly developed mushing skills. It was a fantastic experience to have a full day running a team through beautiful terrain with an experienced guide.

Yukon Quest
We read a few accounts of the Iditarod and Yukon Quest and considered how exciting it would be to attend some portion of a race. After spending time in the Yukon we settled on plans to attend the start of the Yukon Quest in Whitehorse. We made our plans for 2009, sponsored a veteran musher, Michelle Phillips, and had a blast. Seeing famous mushers like Martin Buser and Lance Mackey was inspiring, and hearing the pandemonium of hundreds of sled dogs howling with the anticipation of getting on the trail was unforgettable.  The whole town of Whitehorse was dominated by the race. The frozen Yukon River forms a highway next to town and comprises a section of the race through the Yukon.  Hans Schnuelle went on to win the race in 9 days, 23 hours and 20 minutes in 2009, followed by Hough Neff.  Michelle Phillips came in fifth, a very respectable showing, arriving 1 minute after Martin Buser.

Following the race gets easier every year with frequent Twitter and Facebook communication, as well as updates from the Yukon Quest website. In 2010 they introduced GPS trackers on each sled so their position can be viewed on a map on the website. An interactive 3D flyover of the course is also available on the website.

Father of the Iditarod – The Joe Reddington Story, by Lew Freedman

Falling off a cliff in Quebec-The thrill of Canyoneering

4 responses to “The thrill of dog sledding—A northern sport”