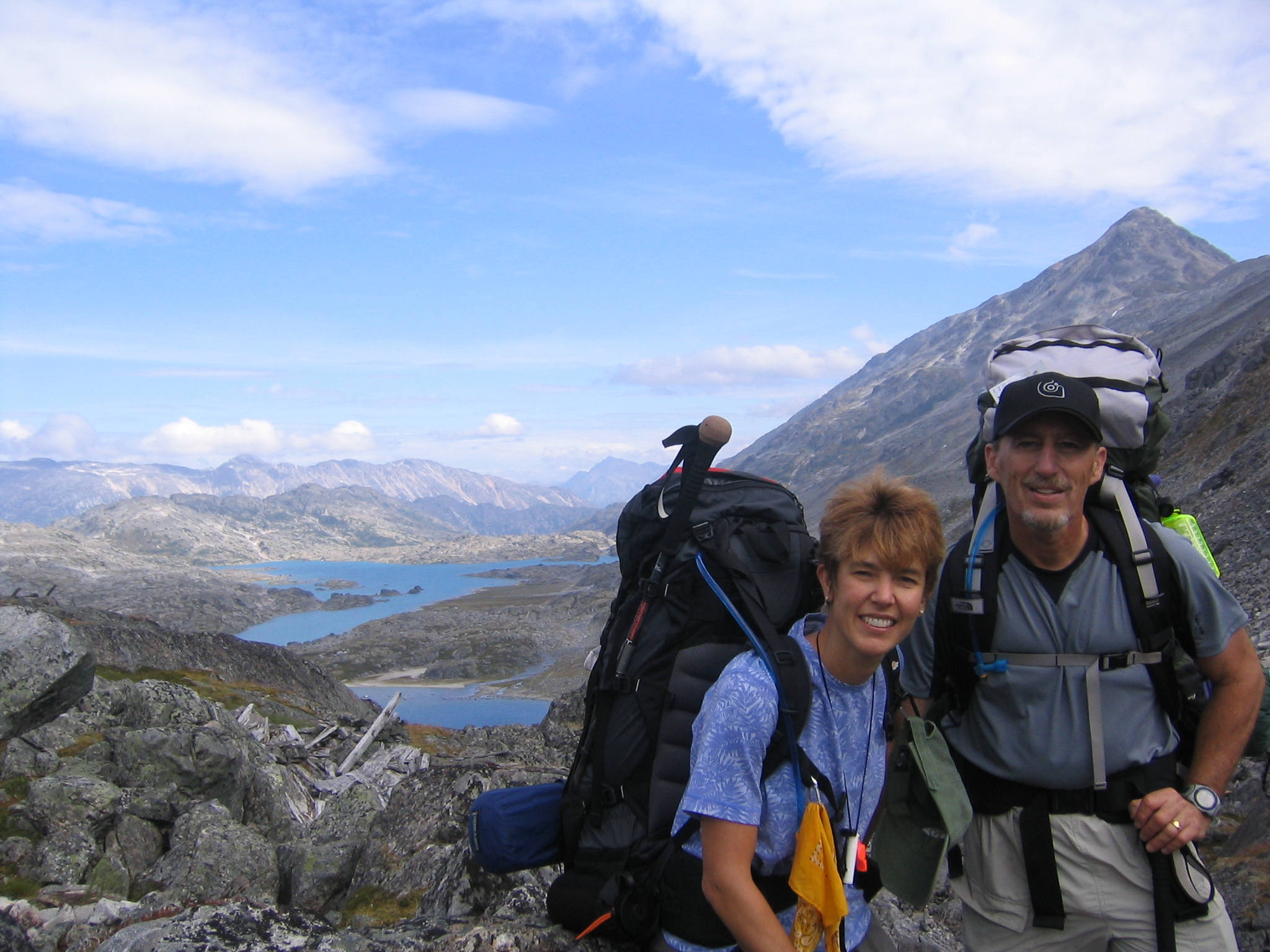 Inga and Steve at the high point of Chilkoot Trail, looking into Canada.

The Chilkoot Trail, the original Klondike gold rush trail, is a classic hike that attracts history buffs and appeals to experienced wilderness backpackers. It spans two countries (U.S. and Canada) with distinctly different terrain in each country. The U.S. side is characterized as a coastal rain forest, heavily wooded with a thick understory of berry bushes, punctuated with dozens of waterfalls that flow into the Taiya River that parallels the trail. The Canadian boreal forest is drier, with expansive granite peaks and a chain of azure lakes that form a part of the headwaters of the mighty Yukon River as it begins its 2,000 mile journey to the Bering Sea. The crux of the hike is the ascent over the 2,500 foot, high alpine Chilkoot Pass at the midpoint (and international border). At the Chilkoot Pass a steep shale slope requiring the use of arms and legs to surmount large boulders is the most difficult section, which can take between an hour and several hours depending on the strength and stamina of the hiker.

The popular Chilkoot Trail is a true wilderness experience with primitive campsites and no services, but it’s one you’ll share with other hikers during the relatively short hiking season of the northern latitude. The park service limits the flow of hikers to 50 per day at the start of the trail in Dyea, near Skagway, Alaska.  The hike is moderately difficult but any strong hiker can enjoy it. The best months are July and August, as the later you go in summer the fewer the snowfields and mosquitoes you will encounter.

This is a hike that requires quite a bit of advance planning, and this summarizes what we’ve learned after several trips to Southeast Alaska and the Yukon, including two times hiking the Chilkoot Trail.  Please join our Chilkoot Trail and Yukon River Travel Facebook Group, which will connect people to even more current information. The Facebook group has active members who live and work in Skagway so they can provide current information.

Links verified and updated in 2019.

The hike starts in Dyea, Alaska, nine miles from Skagway, and ends at Lake Bennett, British Columbia for a total distance of 33 miles (one way). Services at Lake Bennett are limited to the White Pass and Yukon Railway station. Most hikers take the train back to Skagway from Lake Bennett, but it is possible to go the other way and take train and bus to Whitehorse, Yukon.

TIP: If you have a hard stop on a certain date, check the train schedule first and work back from there. Weather and other factors commonly cause delays so allow some wiggle room between hiking/train/ferry/plane. 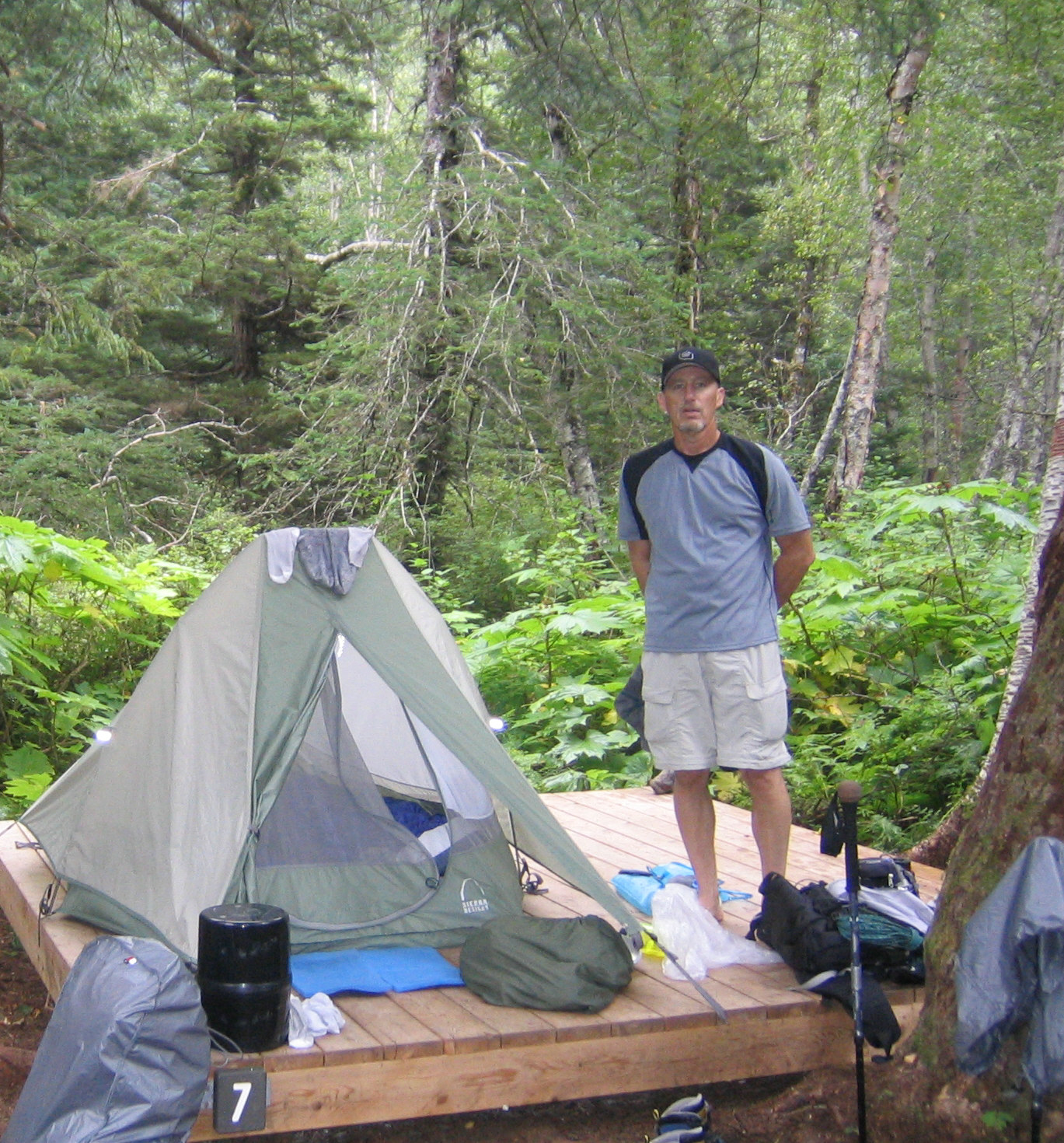 All campsites have wooden platforms

Camping is only allowed at designated campsites on this heavily traveled trail. You need to decide which campsites you will camp in prior to getting your permit, as sites at each stop are limited and you have to specify ahead of time which camp you will stop at. The hike generally takes between 3 and 5 days depending on how hard you like to hike and the mileage you want to do. Taking five days allows for days alternating between approximately 4 and 8 miles per day, except for the crux day, which will be a strenuous 8.7 miles, no matter what.  If you train for that day all others will be easier. The crux day can vary wildly from 6-12+ hours and will be the subject of enjoyable analysis and debriefing for many hours with other hikers at Happy Camp and beyond. If you have time, plan on a zero day (a rest day with zero mileage) on the Canadian side as the camps beyond Happy Camp are worth spending extra time relaxing and exploring. The first time we did it we took five days, and the second time we took six days so we could spend more time at Deep Lake and Lindemann City.

Some notes about specific campsites:

Your choice of campsites will be dictated by your start time on the first day and then you’ll probably skip every other one if you’re on a five day schedule.  If you start in the late afternoon or evening you’ll probably stay the first night at Finnegan’s Point (the first campsite). If you start early in the morning you’ll probably stay at Canyon City (the second campsite on the trail). Pretty much everyone has to spend the night at Sheep Camp as it’s the only option in order to get a very early start for the crux day over the Chilkoot Pass. Rangers will prevent hikers from tackling the summit if you arrive at the base of the summit too late in the day due to avalanche danger, and to prevent weaker hikers from getting too late a start to be able to get to Happy Camp in daylight. You should plan to get to the base of the summit by mid-day as there are many miles to go after the summit. Most hikers arise around 5 am at Sheep Camp and try to get on the trail by 6 am. 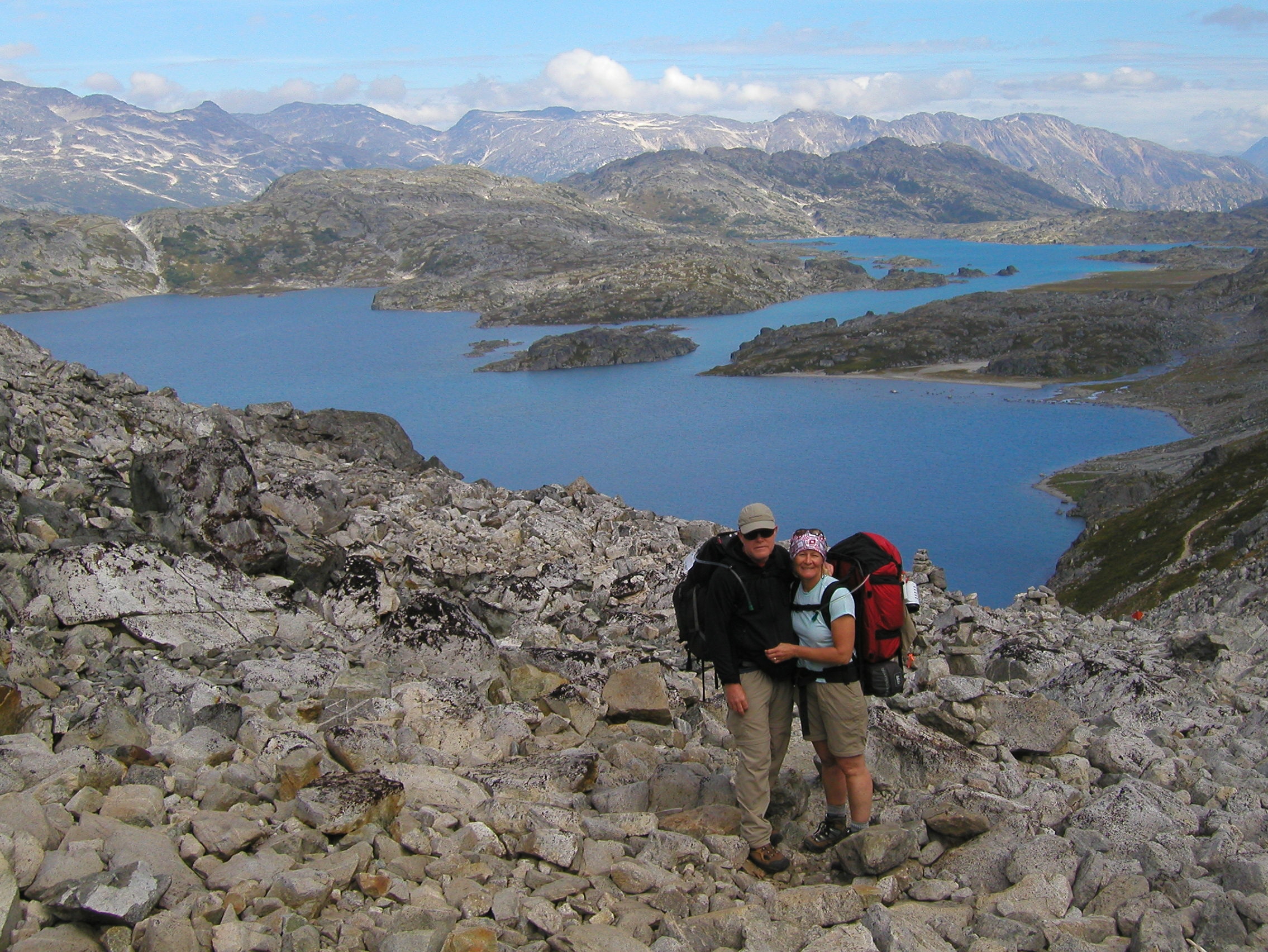 Happy Camp is always crowded as it’s the first campsite after the summit. Deep Lake, just a couple of miles beyond Happy Camp, is beautiful, so if you can push a little further (2.5 more miles, or 11.2 miles from Sheep Camp) on the crux day it’s worth it. A longer stop at Lindeman City is also worthwhile as they have a small museum with books, photographs and artifacts from the trail. Bare Loon Lake has a limited number of campsites but is the one of the prettiest, and yes, the loons make their mournful cry. Most people arrive at Lake Bennett and take the train back the same day, but it is a nice place to camp if you can get there the night before, and is usually deserted in the evening.

Permits are required from June through September and cost about $50 (varies by year). Permits are limited so reserve early (50 are given out daily). You can get information about permits at the National Park Service website.  Information is also available on the Parks Canada site. Permits are affixed to the outside of the pack and must be visible at all times. You will cross the international border on the hike, so you must carry a passport (though we’ve never been asked). 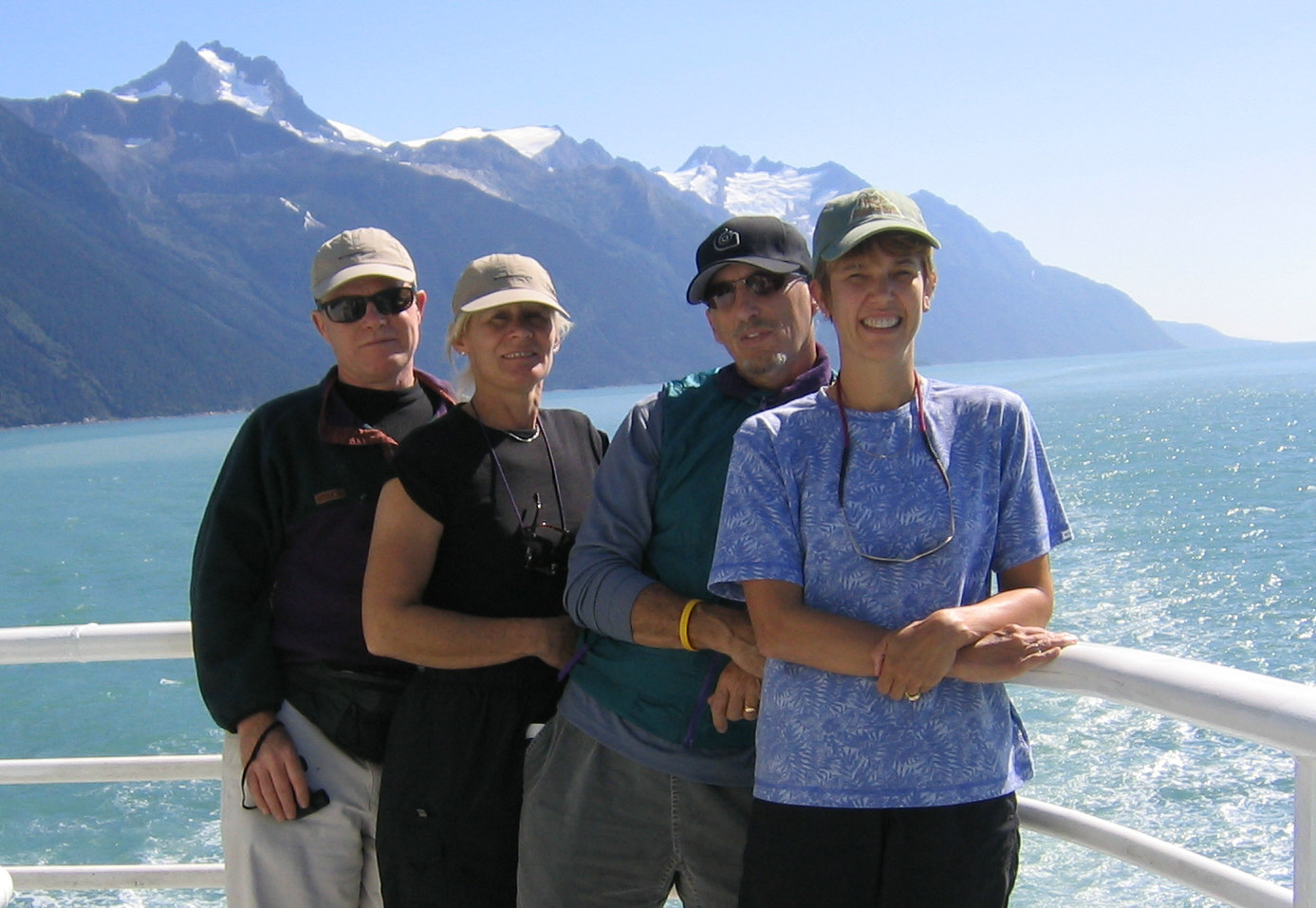 There are several options to get to the start of the hike near Skagway and back home.

From the U.S., fly to Juneau, Alaska on Alaska Airlines

From Juneau you have 3 options to get to Skagway:

1.      Sail on the Alaska Marine Highway System (state ferry) from Juneau to Skagway, a scenic route through glacier country that takes about six hours (check sail dates and times)

2.      Fly with Alaska Seaplanes ( you will need clear weather for the 45 minute flight)

From Canada, fly from Vancouver, BC to Whitehorse, Yukon on Air Canada,or  Air North.

From Whitehorse you have 2 options

From Europe, fly from Frankfurt, Germany to Whitehorse, Yukon, on

Lufthansa and see above for ground transportation options.

You can drive to Skagway via Whitehorse, Yukon Territory. There are no other roads that connect the towns of SE Alaska.

Getting to the trailhead

From Skagway to Chilkoot trailhead or Dyea campground there is only one option: Dyea-Chilkoot Trail Transport, operated by Anne Moore. Dyea Dave, a very entertaining character, provided this service for years, but he recently retired. 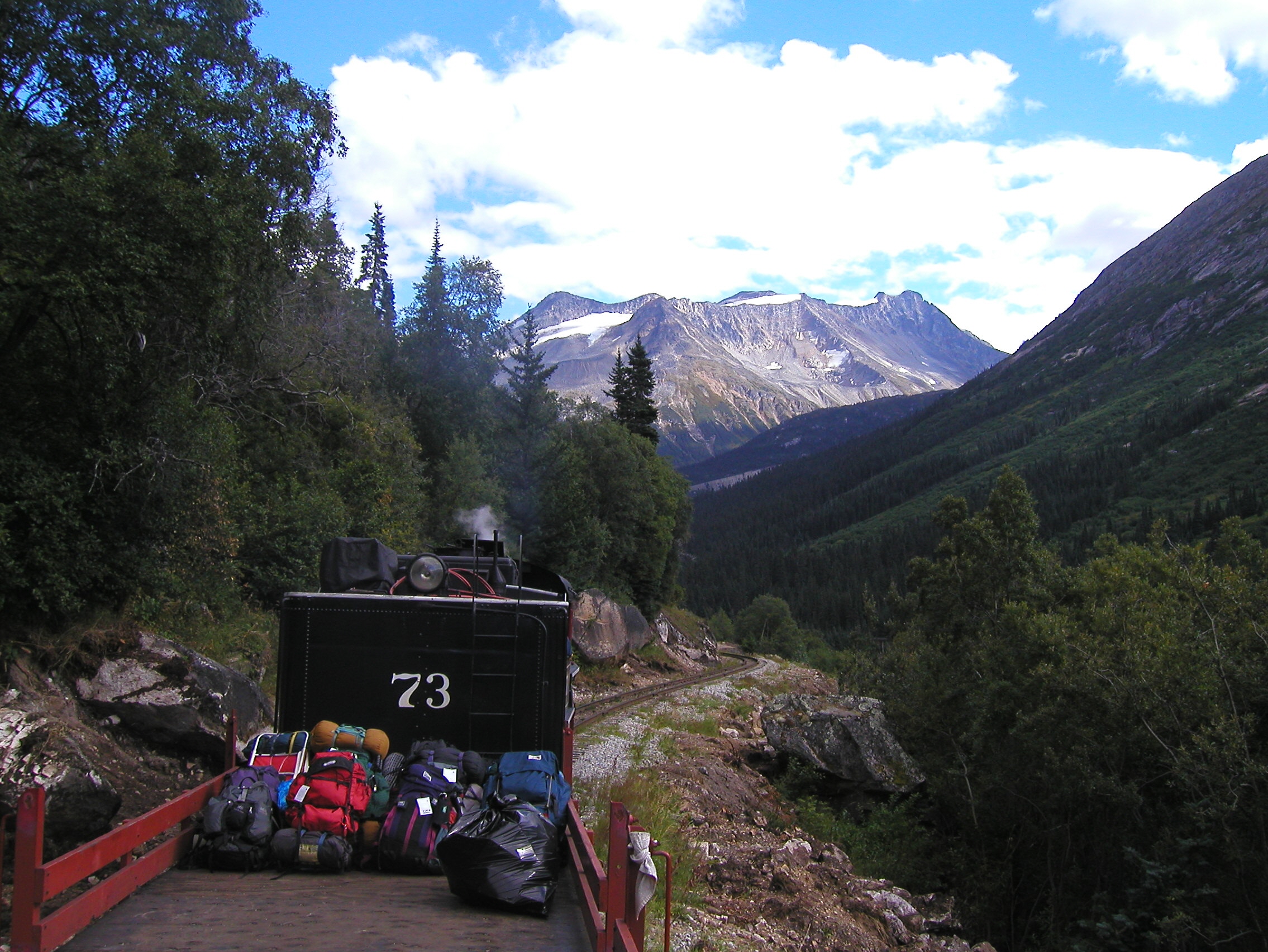 Most hikers will take the White Pass & Yukon Route Railway from Lake Bennett at the end of the hike back to Skagway. You must purchase a train ticket in advance. Check the train schedule as it can vary from year to year and usually runs six days a week, which means it doesn’t run one day of the week. The White Pass and Yukon Railway offers tourist excursions from Skagway to Lake Bennett. They put the backpackers in one car for obvious reasons (unkempt and perhaps smelly compared to the regular tourists). A box lunch can be ordered that is eaten on the train; the hot lunch at Bennett has been discontinued.

If you are traveling north to Whitehorse, Yukon Territory, purchase a train ticket to Carcross, and a bus ticket from Carcross to Whitehorse. This can all be done through the White Pass & Yukon Route Railway.

At times, float plane service may be available from Lake Bennett to Skagway on Alpine Aviation.

3.      Assorted Bed and Breakfast accommodations in Skagway, including At The White House.

The usual backpacking equipment (see gear checklists on the Backpacking Resources page), plus the following:

4.      Bear spray (pepper spray)-purchase in Skagway as it’s not allowed on airplanes, even in checked baggage

Backpacking gear is very personal and this is not a trip for inexperienced backpackers. Just for reference, our packs weighed approximately 35-40  pounds each with water, food and all gear for our 5-6 day journey, though we’ve been able to get about 10  pounds lighter in recent years. If we were doing it now we’d probably each carry 25-30  pounds fully loaded. My base weight is 12-16 pounds without food and water).

Notes about the trail 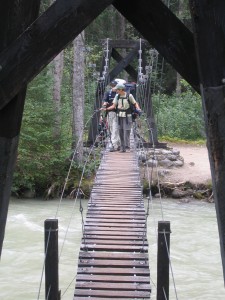 Temperatures in the summer are not generally extreme, though rain is common. Average temperatures in July and August are in the low 50s (F) to low 60s but can can reach the 80s in a heat wave. Snow fields can be present near the summit even in August. Compared to the Sierra, the nights were warmer than we expected.

Water is plentiful along the trail. On the U.S. side minor streams near campsites usually run clear and are easier on a water filter than river water, which can contain glacier silt.

Campsites are being improved yearly and all now have wooden tent platforms and privies.

Solid and suspension bridges negate the need for any stream crossings. In the first day you’ll encounter a narrow plank boardwalk through an extensive swampy section.

Several steep sections on the U.S. side have steps that have been carved into rock.

Ranger stations are located at Sheep Camp on the U.S. side and at Lindeman City on the Canadian side. The ranger gives a safety talk each evening at Sheep Camp to prepare hikers for summit day and give updates about conditions and weather–it’s worth attending.

What’s in my wilderness backpack?

The thrill of dog sledding

See my story, “Bear Encounters on the Chilkoot Trail,” in Travel Stories from Around the Globe.