We encountered snow near the trailhead, and all the way up

We set out on Saturday for a moderate, early season overnight backpacking trip to Paradise Lake, six miles from the trailhead on Highway 80. Despite the calendar noting that it’s supposed to be summer in early July, this is the spring that won’t arrive in the high Sierra, El Nino refusing to loosen its grip on the region.  We only made it as far as the Peter Grubb hut, maintained by the Sierra Club 2 1/2 miles from the trailhead due to extensive snowfields.

We had spoken to the ranger at the Truckee Ranger Station when we picked up our campfire permit, who informed us that thru-hikers were getting through the Pacific Crest Trail (PCT) despite encountering snow. This sounded relatively encouraging as most of the trail to Paradise Lake follows a section of the PCT so we decided to go for it—how bad could it be?

We expected to find some snow drifts on the north-facing slopes but were surprised to find snow on the trail almost immediately. The snow held our weight so there was no tiring post-holing to contend with but did require some alertness on inclines and we held unshakable hope that when we got into more open terrain that the sun would have done its work.

Streams poured out of the earth at every depression, draining the slowly melting snowfields as thirsty skunk cabbage patches drank up, populating the boggy earth in large numbers.

Departing from the trailhead off the north side of the Castle Peak/Boreal Ridge exit east of Soda Springs we shouldered our packs and set off, attempting to stay on the correct trail as snow obscured some sections and other trails branched off of it. At about 0.5 miles we stayed left at a fork in the road, avoided the call of the Hole in the Ground Trail and ascended steeply to a ridge. About 100 yards before the ridge the PCT intersected, and we theoretically stayed on the PCT the rest of the day. This became more theoretical as the day progressed. 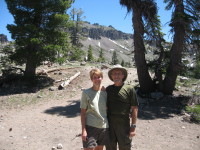 At the top of the ridge we found an obvious trail marker announcing the Castle Pass, affording excellent views over the ridge into the Round Valley, and on our right, the ragged cliffs of Castle Peak. This was the only obvious time that we knew exactly where we were, other than the Grubb Hut. Again trails diverged in multiple directions. Heading north-northeast, on our right, was a trail to Castle Peak, but we stayed on the PCT, dropping down the other side of the ridge, traversing north and heading down slope. Rather disheartened, we encountered snow soon after dropping off the ridge and we followed footsteps that eventually petered out. Finding ourselves looking into a beautiful rounded cirque with a flat meadow at the base we determined that down was correct, regardless of how we got there. Knowing that we should encounter the Sierra Club’s Peter Grubb hut we rightly assumed that the hut would be located in such an attractive location.

As the slope steepened we carefully jammed our heels into the snow to gain a secure foothold and headed toward flat terrain that was pockmarked with intermittent snowfields. It looked promising that perhaps the trail would become more apparent as we lost elevation. Not for the first time that day I wondered if it was really July. 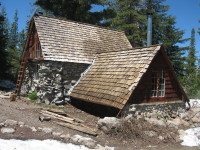 Arriving at the meadow we quickly spotted the Peter Grubb Hut nestled on the edge of the forest at the south end of the meadow. We traipsed toward the hut, picking our way through miniature undulating snow hollows and peaks, noting skunk cabbage and wildflowers anxiously poking through their icy chambers seeking the warming rays of the sun.

The Peter Grubb hut, a 2 story shingled hut built of stone and wood with sharply peaked roof, a ladder to the second story to provide winter access, is sparsely furnished. A wood stove provides warmth on cold nights, while a picnic table and solar powered lights encourage group socializing. The upstairs is lined, dormitory style, with thin, well-worn mattress pads. A new outhouse is located a short distance from the main hut, also two-story, with a gang-plank to access the second story in winter, when several feet of deep snow would prevent ground floor entry. A solar panel conveniently provides a few timed hours of illumination for both buildings, quite a luxury in the backcountry.

Having traveled a laborious 2.5 miles we broke out the stove and made a lunch of ramen noodles and string cheese, gazing at the dramatic granite amphitheater created by the competing forces of uplift, lava flows and glacier carving. The nearby peaks rise to more than 9,000 feet and gently arc around the aptly named Round Valley, the ridge etched against the cerulean sky, powerful granitic slopes sweeping down the to the meadow, continuing down valley in horizontal benches below the hut. 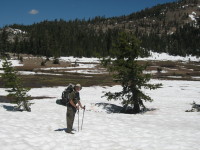 Steve standing in the Round Valley meadow

After packing up and getting back on the trail–hold on, where did that trail go? We tramped around in circles, following footsteps of others as confused as we. Out came the compass, map, the GPS, the text from the trail description. We squinted at the direction finders, the sun, the terrain features, scratched our heads and knew that while the GPS could tell us that we were virtually on top the trail the snow would prevent us from easily finding our destination. Beyond the hut, where fewer hikers venture, it would be harder to follow a trail as the afternoon sun melted the depressions of previous footfalls in the snow. We looked back at the sundrenched meadow, the granite glinting in the light and decided right then and there that weren’t going to have  repeat of last year’s fiasco (see To Hell(hole) and Back—the Worst Backpacking Trip Ever) and we plunked our packs down in a lovely dell behind the hut and called it a day. With the pack on anyway.

That settled, we spend the rest of the afternoon hiking across the meadow as we clambered half-way up the ridge, admired the wildflowers nestled in their granite-framed abodes, marveled at the expansive views from the higher elevations and scrambled happily without the load of our packs.  We wandered all around the places where the trail could be and found broad, smooth granite slabs with sheets of water cascading down and the general direction where Paradise Lake should be, all helpful beta for later in the year when we’ll tackle this hike for real. 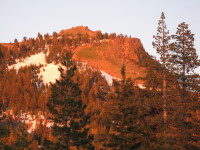 We spent a quiet evening watching the sun throw alpenglow across the granite face, the amphitheater continuing to entertain as the colors deepened and shadows gathered. We pitched out tent, made a crackling fire and listened to the happy voices filling the Peter Grubb hut, which became a collection station for stymied PCT hikers looking for the trail.

The good thing about this area is that once you get the lay of the land and identify several of the most obvious landmarks, such as Castle Peak and Basin Peak it’s pretty hard to get dangerously lost, even if you’re not on the trail. We’re looking forward to exploring more of this area when summer finally starts. That may be in August or September this year, unless it turns into the summer that never was.

To reach North Lake Tahoe from San Francisco by car (approximately 4 hours, depending on traffic and weather):

A free Campfire Permit and information about current fire restrictions are available from any Ranger Station or California Dept. of Forestry office, including the Truckee Ranger District.

Tahoe Sierra: A Natural History Guide to 112 Hikes in the Northern Sierra

Napa wine tasting—If you only have one day (Part III)

The call of the Pacific Crest Trail