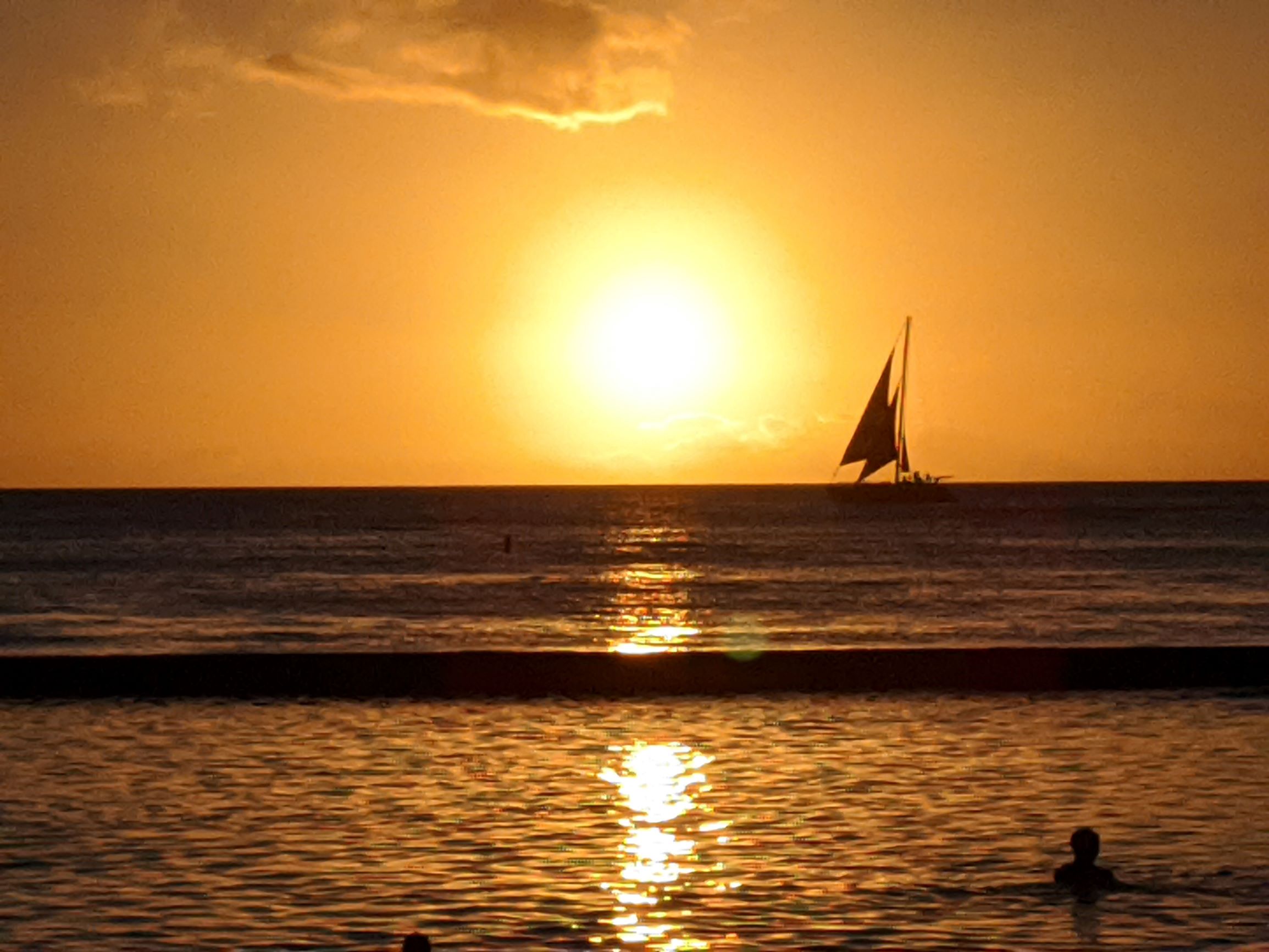 Although I seek all manner of exotic and authentic travel experiences, I must admit I have a soft spot for Waikiki, a blaze of humanity crammed onto a thin strip of sand cradling one of the best beaches in the world, dominated by the stolid mass of Diamond Head anchoring the far eastern point of the island of O’ahu.

From the time I was four my family (consisting of just me and my parents) circled the globe many times as we relocated from San Francisco to distant parts of Southeast Asia for years at a time. Waikiki frequently provided temporary respite from the hectic preparations for these highly anticipated shifts in global positioning, giving us some breathing room before our assault on another land. For this reason, Waikiki represents a warm cocoon of suspension from worldly cares and instantly places me in a state of relaxation.

Decades later, my work took me to the islands, not permanently, but on a rotating basis every six weeks or so for several years. During this time I had the opportunity to explore another layer of the culture of the isles. Still a haole (outsider) visitor, I appreciated all the tips and nudges from local friends who taught me to see beyond the obvious to appreciate the hidden magic of the islands.

I have spent time on all the neighbor islands, and while each has their charms, I prefer O’ahu for a number of reasons. First, the beaches are world class, and all are open to the public, with the exception of military installations. Second, the variety and quality of restaurants is unsurpassed. Third, the public transportation system mostly negates the need for a car. Fourth, the variety of activities is vast, from snorkeling, surfing, hiking on remote tropical trails, museums, world class shows, traditional Hawaiian music and hula performances, movie theaters, sailing, outrigger canoeing and more.

Waves of immigrants brought different plants, animals, spices, cooking techniques, and flavors, to be melded together into the distinctive dishes and culture of the islands. First the Polynesians brought taro and sweet potato for planting, along with domesticated pigs, chicken and dogs, probably arriving as early as 600 AD in their outrigger canoes. Then came the English with Captain Cook in 1778, followed by Americans, Portuguese, Koreans, Chinese, Japanese, Filipinos, Puerto Ricans and Samoans, either as conquerors, missionaries, plantation workers or entrepreneurs. These influences, along with the abundant fish in the ocean, contributed to the medley of flavors that we enjoy today.

Here is a sampling of some of my favorite eateries on the island of O’ahu, starting with Waikiki, organized by location on specific streets.

Kalakaua Ave. with its glitz and glamour, contains many fine restaurants that are easy to spot.

Hale Kulani Hotel:  For upscale bar, dining and entertainment, the Hale Kulani Hotel is our favorite. There are three restaurants to choose from—Le Mer, Orchids and House without a Key, representing different levels of luxury. Authentic Hawaiian hula and mele (dance and song) can be found most evenings beach-side.

Moana Surfrider:  My favorite place to enjoy a drink after a day enjoying the waves of Waikiki is at the beach bar under the huge banyan tree at the Moana Surfrider—the chi chi’s can’t be beat.

Duke’s:  A perennial favorite, this places honors Duke Kahanamoku, the father of modern surfing.  Born in O’ahu in 1894, Duke won several  Olympic medals and is revered in the islands and in surfing circles worldwide. Often crowded and noisy, the bar and restaurant have an invigorating energy that can be appealing. Al fresco dining completes the beach theme.

Tiki’s Grill and Bar: One of my favorite mid-scale places is Tiki’s Grill and Bar, located in the Aston Waikiki Beach Hotel. It features a number of traditional Hawaiian foods, including ahi tuna, miso butterfish, and the Hawaiian plate, featuring ahi poke (marinated raw fish), kalua pork, laulau (pork baked in taro leaves), lomi-lomi (chopped salted salmon mixed with fresh tomatoes), poi (a paste made from taro root—an acquired taste that I haven’t acquired yet—it’s not bad if you dip a some meat in it) and haupia (coconut custard). Sadly, they don’t always have the Hawaiian plate on the menu.

If you are looking for a little more variety you can find it close by. Two streets deserve exploration, Kuhio Avenue, running parallel to Kalakaua Avenue, and Kapahulu Avenue, running perpendicular to Kalahaua Avenue, dividing Waikiki from Kapiolani Park. Both contain numerous casual eateries if you’re looking for a quick bite to eat, or substantial restaurants with a more laid-back atmosphere than Kalakaua Avenue.

Jinroku Restaurant:  We stumbled across Jinroku Restaurant, a traditional teppan (Japanese for “grill”) style restaurant in a modern, contemporary setting. We sampled the gomoku takoyaki, a tasty fried dumpling with octopus and vegetables inside a smoking hot fritter. Steve had the negiyaki, a thin pancake comprised of flour, grated yam, eggs and cabbage, mixed with beef tendon and more vegetables. The pancake is mostly veggie with just enough batter to hold it together. I enjoyed yakisoba, slender buckwheat soba noodles pan fried with thin sheets of pork, calamari and shrimp. We washed it down with Kona Longboard beer and many cups of green tea.

For something a little more casual, Me Bar-B-Q  at the Royal Grove Hotel offers Korean BBQ that is a good take-out option, though they do have a few tables outside their small restaurant. Grilled meats, seafood, katsu (deep fried breaded chicken), jun (fish or meat marinated in egg), are available on the menu, with rice and a number of side dishes to choose from, including glass noodles, vegetables and kim chee.

We enjoy Dukes Lane (includes Basalt, a market and a couple of casual eateries), The Street Food Hall by Michael Mina and many other restaurants that come and go on Kuhio. It’s a great place to be able to walk up down until you find what you’re looking for.

Food trucks have blossomed on and near Kuhio Ave so that’s a good option for a quick bite.

Kapahulu is a gold mine of eateries, though the neighborhood is architecturally non-descript and practically devoid of foliage. A short walk can bring you to a wide variety of ethnicities from traditional Hawaiian, Chinese, Vietnamese, Middle Eastern, Mexican and more. I haven’t tried them all, and some come and go, but you’ll always find a large variety to choose from. Here are some of the places we’ve sampled.

Rainbow Drive-In:  The venerable Rainbow Drive-In has been a locals favorite for 45 years. Rainbow features standard burger fare, but people go there for the plate lunch, another unique Hawaiian food fare. Your basic plate lunch is comprised of two scoops of white rice (a standard part of many Hawaiian dishes), one scoop of mayonnaise-y macaroni salad and an entrée. The entrées include pork, chicken, curry, mahimahi, ahi or an artery clogger known as Loco Moco. The Loco Moco base is rice, topped by a hamburger patty smothered in gravy, with a fried egg sunny side up on top.

Da Ono Hawaiian Food (previously Ono’s Hawaiian Food): Da Ono Hawaiian Food is recommended for adventurous foodies who want to experience an authentic plate of traditional Hawaiian food, not the typical fare you find a tourist luau. The best course of action is to put yourself at the mercy of the waitperson. Just tell her you have never had Hawaiian food and follow her direction. They take delight in sharing with visitors the history, tradition and culture embodied in the traditional foods, so keep an open mind and give everything a taste. The setting is non-descript but you’ll see by the reviews, clippings and photos on the walls that this is a very special place. It was after I ate here that I developed an appreciated for certain local foods. Here you’ll find laulau, kalua pork, lomi-lomi salmon, poi and more (foods described above—see Tiki’s). This is the real deal.

FoodLand and Safeway:  Both Foodland (on Harding Ave) and Safeway (on Kapahulu) offer a large selecction of fresh seafood poke. A good place to stock up for a crowd of poke-loving friends, they also have lomi-lomi salmon, seaweed salad and a host of other fresh, local treats.

Leonard’s Bakery: Another long time local’s favorite, Leonard’s has been baking malasadas since 1952. Leonard’s grandparents came to the islands from Portugal in 1882 to work in the sugar cane fields. The malasada, a Portuguese confection,  is a fist sized, deep fried ball of dough dusted with sugar, like a doughnut without the hole. I like the plain malasadas the best, but Steve prefers his with haupia (coconut pudding) filling. A box of malasadas is always welcome at any party, eliciting approving murmurs or squeals of delight, depending on demonstrativeness of the receiver.

I usually stay right in the heart of Waikiki. I’ve stayed in many of the major hotels located on Kalakaua, from the historic Royal Hawaiian, Marriott, Sheraton, Outrigger, and Aston Waikiki Beach, and they all have predictably good service, decent to great restaurants, and mostly up-to-date rooms.

The most unique and historic are the Royal Hawaiian and Moana Surfrider (both Marriott properties), the original grand dames of the beach in the glory days of the early 1900s. The Moana Surfrider, the First Lady of Waikiki, graced the beach in 1901, joined a bit later by the Royal Hawaiian, the Pink Palace of the Pacific, who opened her doors in 1927.  Another highly recommended place in the lap of luxury is the Hale Kalani, also located right on the beach.

When I was working I needed something different, so one day when my husband, Steve, accompanied me I sent him out to check out accommodations that were a little more spacious and practical than a hotel room for extended stays. He looked at many places and narrowed down a few selections for me to check out. Some were dark and dank, some had questionable security for a solo female traveler, and some kitchens were little more than a hot plate and microwave. I settled on the Aston Waikiki Sunset, and it’s worked out well over the years. Located at the Diamond Head (south) end of Waikiki near the zoo and Kapiolani Park, it is just off Kuhio Avenue behind the Marriott and Aston Waikiki Beach hotels. It’s a condo/hotel, which provides the best of both—a one-bedroom apartment with full kitchen, living room and balcony, with daily room service and 24-hour reception area. Other amenities include a pool, tennis courts, convenience store and business center. The rooms on the lower floors can be a bit dated and worn, so it pays to view a couple of rooms before making your final selection. The upper floors have been renovated and they are gradually working their way down. Rates are reasonable and are generally much lower than hotels a block away on the strip.

The options for lodging and food are endless in Waikiki so there is sure to be something for almost every preference.

One response to “Eating and Sleeping in Waikiki, O’ahu, Hawai’i”