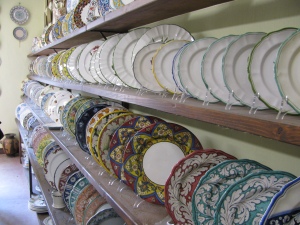 Gazing at the riot of designs and colors my eyes darted around wildly, unable to focus on any one motif. I shuffled around the showroom trying to organize the patterns into a coherent sense, without success. With some relief we were ushered into a workroom to begin our education of Umbrian ceramics, after which I had a whole new appreciation for what I had seen initially.

In Italy it doesn’t take long before a striking realization hits you that nothing in ancient times was created without considering the inherent aesthetic value, from the most mundane, everyday items to the excess of riches displayed on public buildings laced with sculptures, fountains and gardens.

The ceramics of Deruta, ground zero for Umbrian pottery, captivated us on a recent trip to Italy. Our introduction to the ceramics of the region had been arranged by our helpful host, Susan, whose farmhouse, Fondo Le Teglie, we had booked for our week in Umbria. American-born, she has been living and working in Italy for many years, speaks fluent Italian and was in the know about where to go and what to do.

The U. Grazia Factory

We arrived in Deruta on a gray autumn day and were greeted by a gregarious Dr. Ubaldi Grazia, owner of the U.Grazia factory, one of 200 ceramics factories in Deruta. We quickly learned that we weren’t seeing just any ceramics, but rather the creation of something special. Dr. Grazia began by listing some of his well-known clients, and it became clear that it wasn’t braggadocio, but the real deal, backed up by centuries of experience and some of the largest clients in the world, including Williams Sonoma, whom they have been supplying for more than 15 years, Neiman Marcus, Saks Fifth Avenue and Gumps. When he heard we lived near the Napa Valley he said he counts as personal friends the Robert Mondavi family , Francis Ford Coppola, the Sebastiani’s, all well known Northern California wine making royalty.

Dr. Grazia’s family has been making ceramics in the traditional way since the 16th century, following customs established since the 12th century. Their original factory is now part of a ceramics museum. They use classic patterns to create “majolica” ceramics, a type of enameled and decorated pottery crafted through several distinct processes.Dr. Grazia was quick to point out that he himself is not the artist. “My grandfather was the artist,” he said, “I am the businessman.” It’s clear from their success that a combination of artistry and business smarts have been evident through the generations. He told the story of Alice McDowel, an American entrepreneur who visited the factory in 1925. She owned a chain of restaurants in the United States and ordered dinnerware for all of her restaurants, greatly increasing the scope of operations.

Deruta’s success through the centuries is due in part to the excellent quality of the local clay. First the clay is harvested from a nearby quarry and large quantities are stored behind the factory.

The desired amount of clay is sliced from a log of moist clay using a taut wire with wooden handles on either end. 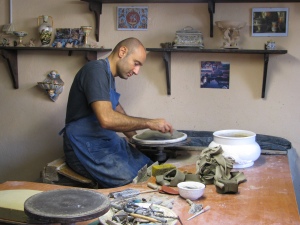 Shaping a plate using a form

The clay is then shaped by hand using molds for production items such as plates or bowls.

Vase being thrown on potter’s wheel

Other items are thrown by hand using a potter’s wheel. 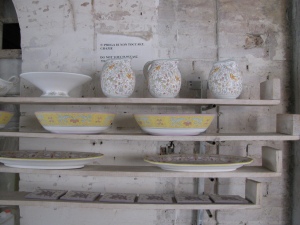 Once the desired shape has been created the clay objects are fired in kilns at 1020° C (1868° F). This first firing results in a fragile product called “bisque”. 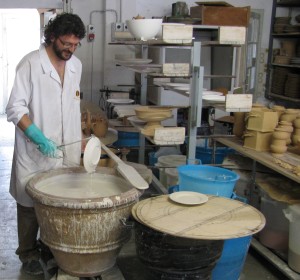 Dipping the bisque in the glazing bath

Using tongs, the bisque is carefully dipped in a mineral oxide glazing bath to provide the proper base to accept the special glaze colors. 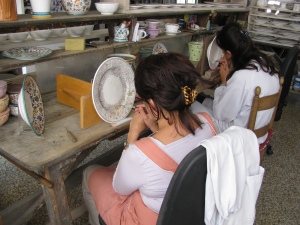 Now the ceramic item is ready for painting. The patterns are hand painted using mineral oxide-based glazes. The traditional patters are painted by hand by local artisans who painstakingly repeat the same steps over and over, consistently reproducing the forms and patterns with little variation.

While the Grazia factory has been producing traditional designs for centuries, Dr. Grazia also accepts modern motifs from artists around the world, and can reproduce any pattern to create a small or large production line of goods.

After the designs are painted the ceramic is sprayed with liquid glass and fired a second time at 920° C (1688° F). It takes 40-50 days between the first step of creating the shape to the final product.

Dr. Grazia, ever the entrepreneur, is committed to assuring that the process his family has perfected over the centuries continues on. To that end he has created a school to teach others the techniques. The school, newly opened in March 2009, is ready to welcome American students from several art programs Dr. Grazia has been in touch with. The guest book had already been signed by early visitors to the program, including a note from University of Montana professor, Richard Helzer, from Bozeman, Montana. This is sure to be a successful venture, for anyone interested in this early art form could do no better than to study under the tutelage of the masters of the Grazia artists and production team.

The wonderfully informative tour by the owner of the factory was free of charge, but none of us could resist making a purchase. We selected a beautiful pattern called “Marla Price”, an unusual name with a story behind it. Marla Price was the Director of the Modern Art Museum in Fort Worth, Texas who came to Deruta on an antiquing trip in Italy in 1990. She showed Dr Grazia an antique plate, which he immediately recognized as a piece created by his grandfather, also named Ubaldo Grazia, around 1910. She rebuffed his request to purchase the plate, but allowed him to re-create the original design, comprised of a flowering blue scrolled component bordering a Renaissance figure in the center.

We came uninformed and left with a sense of wonder that the simple elements of earth, water and fire could result in such artistic works. Our “Marla Price” bowl will forever link us to the ancient artisans of Dr. Grazia’s family and beyond.

All photos by Inga Aksamit