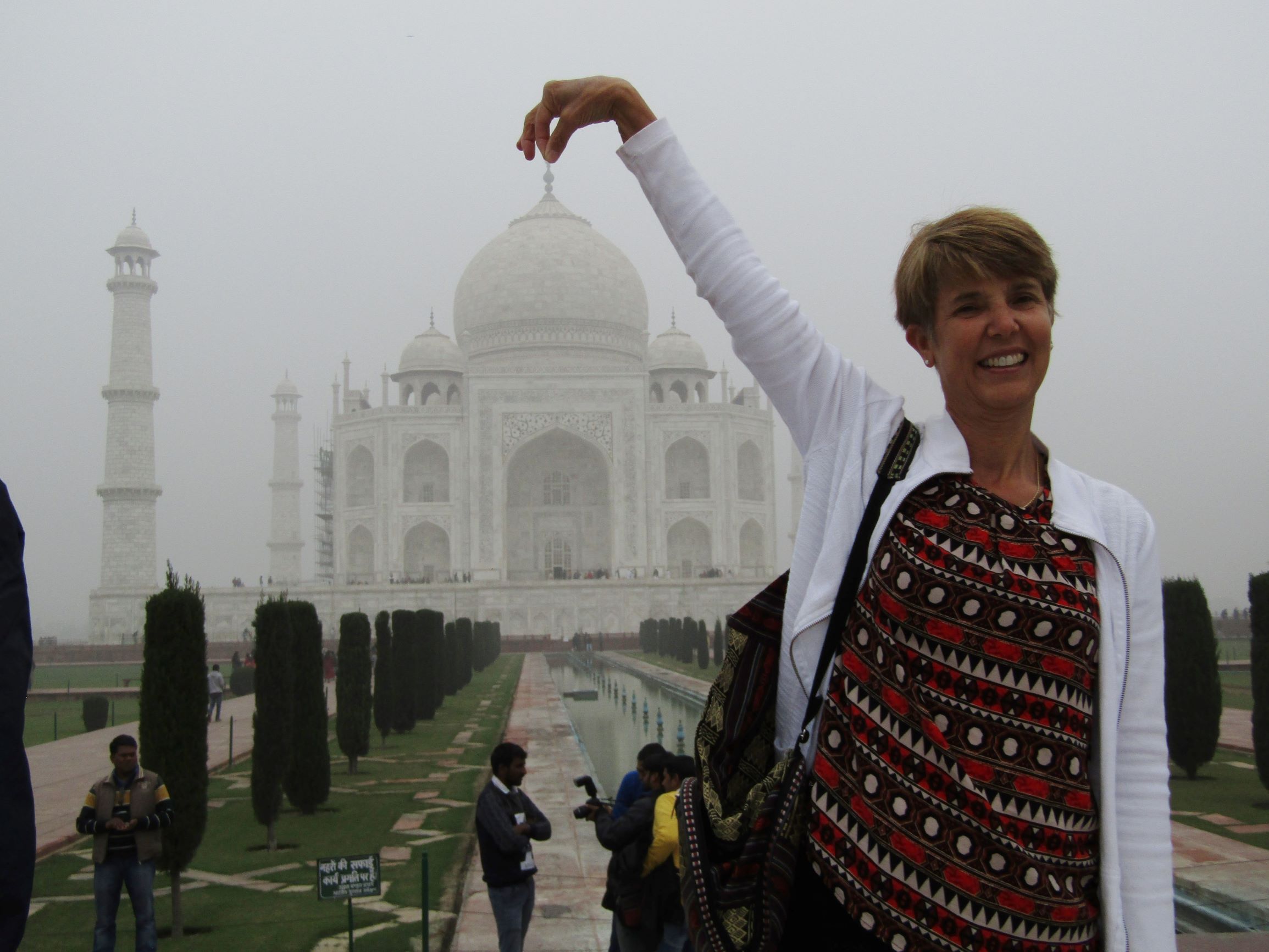 Up, Down and All Around in India: A Sample Itinerary

For a visitor from the U.S., the first steps onto the tarmac in India can assault the senses. Humid air, a cacophony of sounds, vivid colors and the odors of a thousand sources can be overwhelming. It helps to have a plan to tackle a country so large and diverse. Here, I’ll share our one-month itinerary.

First, some quick facts: India, the seventh largest country in the world, ranks number two in terms of population. With a history in the Indus Valley that dates back to 7,000 years BCE, India is filled with ancient temples, palaces, carvings and natural wonders. The official languages are Hindi and English, but don’t expect everyone to speak English; many speak their own dialect and Hindi but their grasp on English may be limited. Going clockwise from the northwest, the country is bordered by Pakistan, China, Nepal, Bhutan, Bangladesh, Myanmar (Burma), Bay of Bengal, Indian Ocean and the Arabian Sea.

Our general plan included an area known as the Golden Triangle. This makes a convenient route for first-time visitors as it includes the Taj Mahal and many other highlights. We used that as the basis for our trip with two big spurs, one up to the Himalayan foothills and one down the to beaches of Goa (which led to additional areas of exploration). Even though we had a month, we knew we couldn’t try to cover the whole country. We’re big backpackers, but we steered clear of trekking for our first trip to India, knowing that we’d get sucked into a big trek that would consume most of our time. Trekking would have to wait for another trip. This divided the trip into three unequal parts:

I’ll describe highlights of each, the number of days we spent at each, where we stayed and recommendations for doing things differently, especially if you don’t have a month. 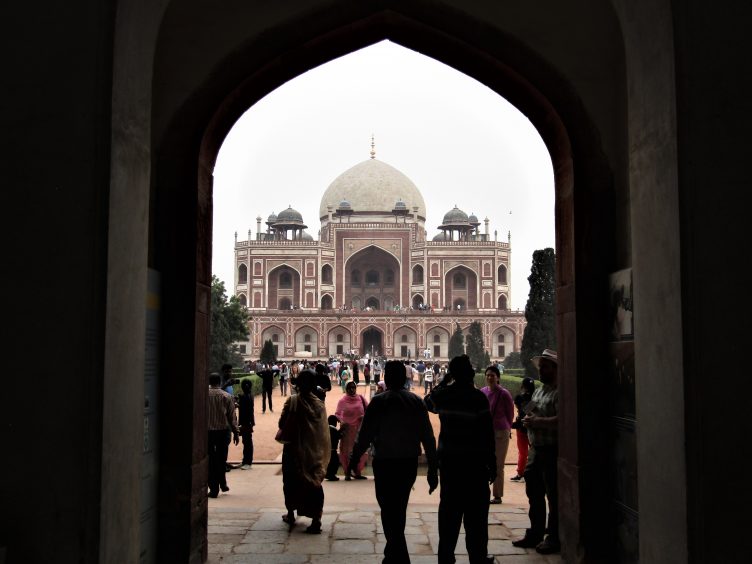 We started here for a couple of reasons:

It’s a long flight from the U.S., no matter how you do it, around 20 hours or more. We flew from San Francisco to Newark, NJ and then flew 14 hours to Delhi.

There are a number of sights in Delhi that can be accomplished in one day. There is no need to set up a tour ahead of time as this can be arranged through your hotel or any of a million tour operators in the tourist areas. It will be much less expensive if you arrange for a driver or join a tour group when in Delhi as opposed to planning it from the U.S. Don’t be afraid to dicker on the price. We chose to hire drivers by the day or location as transportation was cheap. Prices are generally quite fluid in India. We made some plans ourselves using the internet to book transportation and lodging. We supplemented this with a local tour agent, John Dar at Float and Fly Tour (+919999199088) in Delhi. He arranged private drivers and some lodging all over the region  and is highly recommended.

We saw the following over a day and a half in Delhi, arranged in order of our enjoyment. If you’re pressed for time, lop off the ones at the end. The Delhi Tourism website has a succinct list of tourist destinations so look through them and see if there is anything you’re interested in beside what I’ve included below.

We stayed at a small hotel, Corus Hotel, in Connaught Circle (also referred to as Connaught Place), which is centrally located area in Delhi. The hotel was nothing special but it was reasonably clean, the staff was nice and breakfast buffet was decent with a few Indian dishes, papaya and pineapple cut fruit, hard boiled eggs, juice and toast. This breakfast followed the pattern for most of the hotels, with slight expansion or contraction depending on the price point of the hotel. The entrance from the inner circle was somewhat menacing with just a small door but that’s because the taxi wasn’t sure where it was. The main entrance was actually on the other side of the block. There is a park in the center, but there isn’t much to see there except a huge Indian flag. However, it’s a pleasant place for a short stroll.

When we circled back to Delhi to fly to Goa we stayed at an Ibis Hotel at the airport. Ibis Hotels are the same the world over, which is nice when predictability is desired.  Traffic was so congested that we felt it best to be near the airport for a morning flight.

If you are arriving in Delhi after a very long flight and have any hotel points for a U.S. chain, this would be the time to use them. We prefer to stay in hotels with more local character but arriving in the middle of the night with jet lag is not the best time to get acculturated. 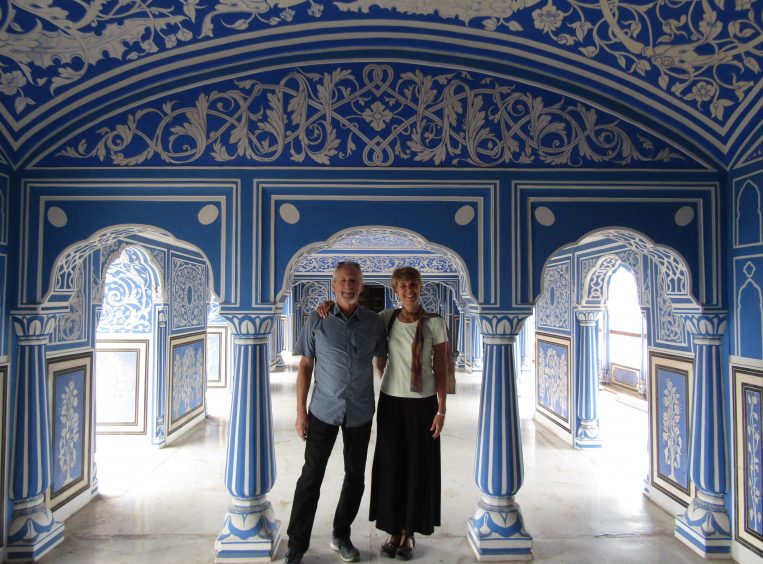 The focus in Jaipur is on palaces. The Jaipur Kingdom (now Rajasthan) existed for several generations from 1128-1974. Kings were succeeded by their sons or other male heirs and several built huge, ornate palaces that are spectacular to behold. The first three can take a couple of hours each while the last two are quick viewing visits.

The region is known for its gemstones and block printing, so expect to visit a factory store for each if you’re on a tour or if you hire a private driver. It’s understood that they get a commission and you’ll pay slightly higher prices but that’s the game. It’s still pretty inexpensive. If either of these are of particular interest to you do some research, determine your needs and negotiate.

Our hotel, the Alsisar Haveli, was a palace unto itself, ornate and exotic. It is highly recommended. 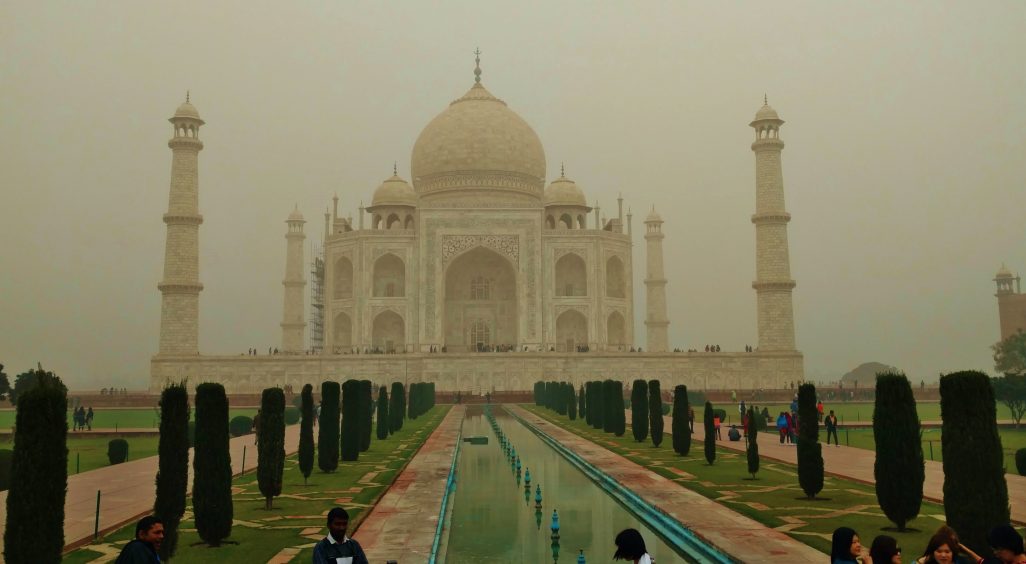 Taj Mahal in Agra, through the fog

This is where the Taj Mahal is located. The world-famous white marble mausoleum sits on the bank of the Yamuna River, a tributary of the Ganges. The Mughal emperor, Shah Jahan, who reigned from 1628 to 1658) built the structure to house the tomb of his favorite wife, Mumtaz Mahal.

The Emperors resided in the nearby Agra Fort, which is currently occupied by the Indian Army. A small portion is open to the public.

Our hotel, the Radisson Blu Agra, was a large hotel with a well-equipped gym, several restaurants and a bar and spa located . 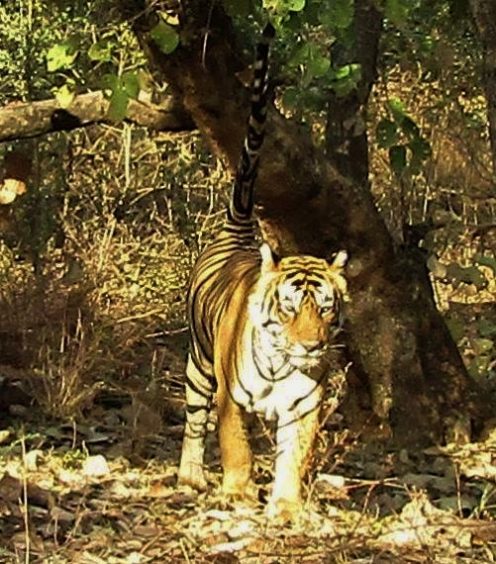 A popular extension to the Golden Triangle is a tiger safari at Ranthambore National Park, a five-hour drive from Agra. The nearby town of Sawai Madhopur has many places to stay at all price points to support the effort. Tickets to the tiger safari can be obtained from local travel agents but the safari itself is government-run. There are two options, both open air: the small jeep (holds six plus the driver and spotter) or canter (holds 20 plus driver and spotter). The jeep is recommended as they can travel on the smaller roadways and you may be more likely to see a tiger. You may be more likely to see a tiger on the morning safari instead of the afternoon safari. If you have the time, schedule more than one safari to increase chances of viewing a tiger.

We chose a small jeep. We had three adults in the front row, while an Indian family of three adults and a child were squished into the back row. The driver picked us up at our hotel, then went to a nearby hotel to pick up the other group. The roads were busy with the government jeeps picking up passengers all over town. It was quite chilly at first and the locals were bundled up with hats, scarves and coats. The steep, rough trail was intimidating at times but the driver did a good job in the lowest gear going very slowly. We saw antelope, deer, boar and peacocks but no tigers for the first two hours. We were pretty disappointed until 30 seconds before we exited the park. All of a sudden, there was a tiger lounging by a watering hole! Everyone was very excited. The tiger got up and ambled away but we were able to follow the road as it curved around to get another view of him in the forest.

In the afternoon we visited the Khandar Fort, a large complex with several Hindu temples. 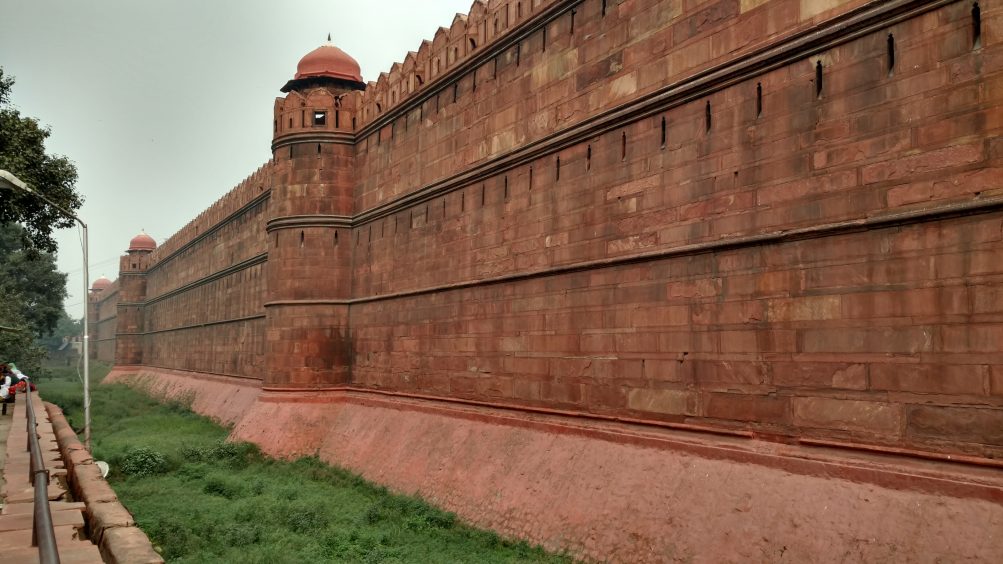 An example of an itinerary could look like this:

This 10-day loop on the Golden Triangle will give the visitor a good introduction to India. If you have more time, visit Shimla, Mumbai, Goa, and Aurangabad. 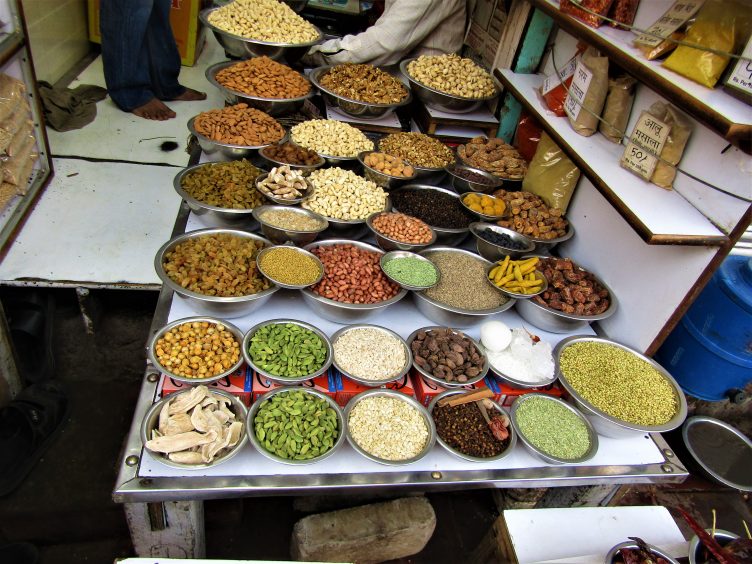 I enjoy immersion via books and video in the places I’m about to visit. A vast number of books and films have been produced about India, so many that it’s hard to narrow down the choices. These were some of my favorites, but there are so many more to choose from. Some provide historical context while others reveal hidden facets of India. 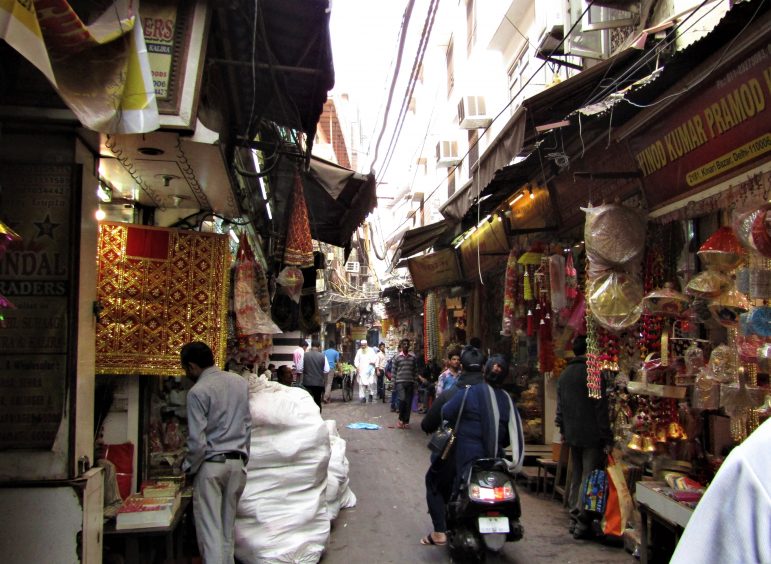 Tahoe to Sonora Pass on the PCT: Daily Trip Report