The Alsace Region,  nestled between Switzerland and Germany and the Vosges Mountains in France, is known for its aromatic white wines and charming villages. I visited the southern part of Alsace, known as Haute-Rhin, or Upper Rhine, on a recent trip that originated in Geneva. Since it was only a 3-hour drive from Geneva it was appealing to explore the wines of Alasce while we were there. 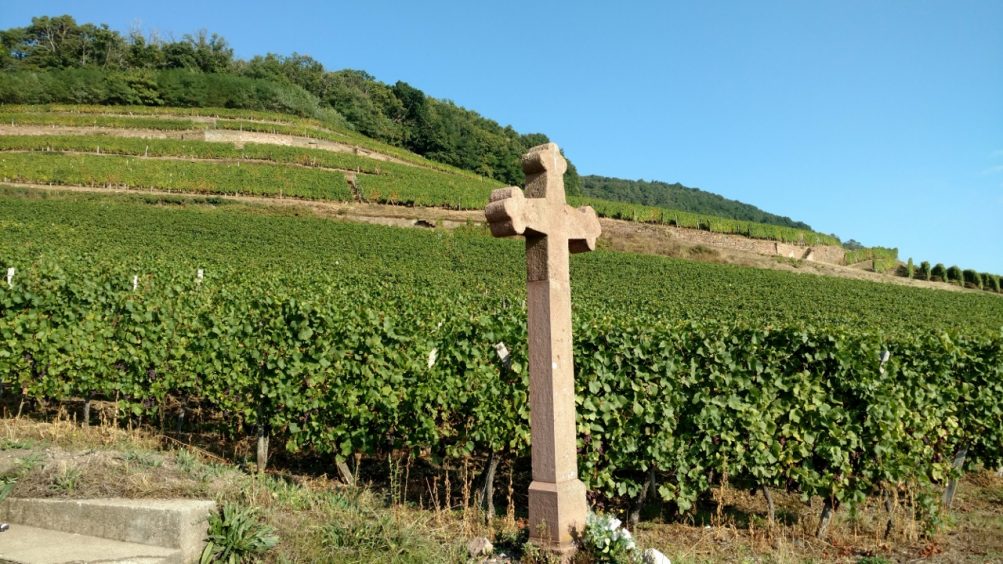 Vineyards at Domaines Schlumberger in the Alsace Region

I’ve been intrigued with the aromatic white wines of the region, which includes Riesling, Gewürztraminer, Pinot Gris, Pinot Blanc and Muscat, for a long time. For many years, we attended the International Alsace Varietals Festival  in Mendocino County, CA. One year I met a congenial young man, Thomas Schlumberger, from Domaines Schlumberger in Alsace. That planted the seed for our wine tasting adventure.

After hiking the Tour of Mont Blanc my husband and I were ready to relax and taste some fine wine. We took off from Geneva in a rental car and made our way to Mulhouse, the largest city in Haut-Rhin. Our base of operations was the lovely Le St Barnabe Hotel and Spa on the outskirts of Mulhouse. . We quickly settled into a large room in the main house. There were several buildings that rambled through the property and more rooms were in a nearby wing attached to the spa and pool. Our room looked as though it was freshly renovated with a sleek, modern appearance, pebble floor in the shower and artistic double sinks while our friends had a room that was a more dated, country farmhouse style, though comfortable. 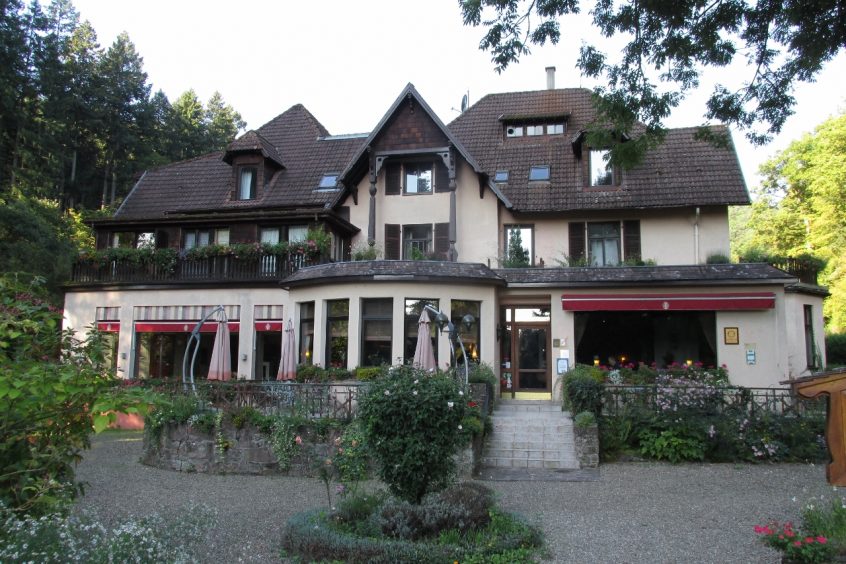 We dined two nights at the hotel restaurant, Le Jardin Des Saveurs, finding the food to be delicious, service excellent and setting delightful. We enjoyed an amuse bouche of toast points with charcuterie, corn chowder-like soup, tender octopus salad with vinaigrette and a green salad to start. I had the most tender lamb with herb crust that I’ve ever had while my husband enjoyed crispy duck and our friends ordered beef and swordfish. There was quite a variety. A local Cremant, the Alsacian sparkling wine, was the perfect pairing with our starters and then we moved on to a Pinot Noir, which spanned the variety of our main courses nicely.

One night we took a short drive to A L’arbre Vert in Wintzfelden, where we enjoyed an exquisite meal with enchanting, old-world hospitality. The outside was unprepossessing but inside the atmosphere was formal yet welcoming with white tablecloths and a quiet, controlled mood. We struggled a bit with the menu as our French was lacking but managed to make tasty selections of tomato and mozzarella salad, with fricassee shrimp and roasted duck main courses.

For our first full day in Alsace we started with a scheduled visit to our friends at Domaines Schlumberger in Guebwiller. Thomas drove us out to the ancient Schlumberger vineyard, which has been in the family since the 18th century. I was struck, as I always am in Europe, at how long their history goes back compared to the U.S.. As it was mid-September when we visited, harvest was just about to begin so we saw fully developed clusters of healthy looking Pinot Blanc on our tour. 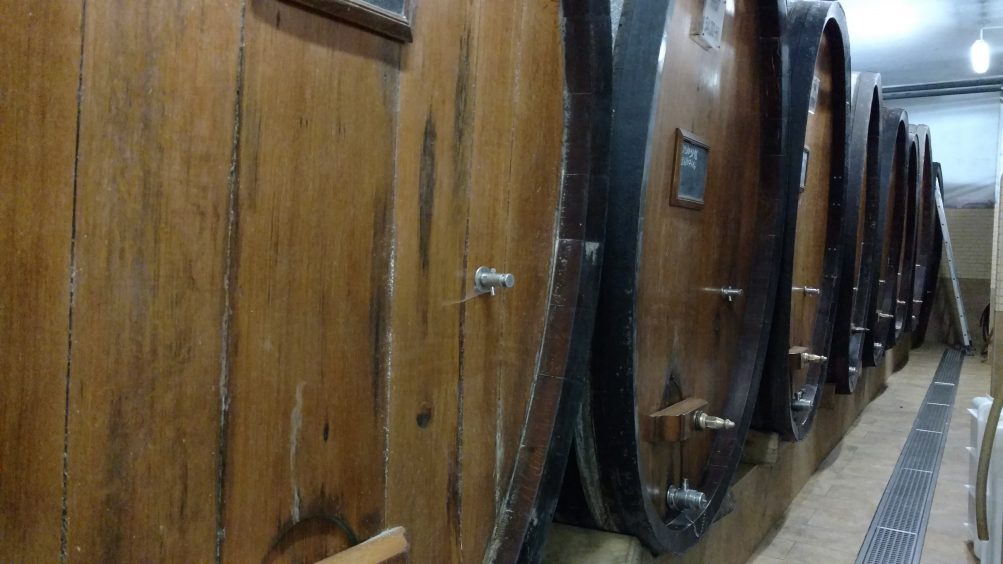 The top wines of the region are known as Grand Cru and Thomas’ sister Severine walked us through several examples of their Grand Cru wines compared with regular vintages. Both were generally excellent but the Grand Cru stood out with more complexity and flavor development. We tasted a very dry Riesling, Pinot Gris and Gewürztraminer and a late harvest Gewürztraminer. My favorite was the Grand Cru Spiegel Pinot Gris (2012), which bore little resemblance to the Pinot Gris I’ve tasted in the U.S.. There was no sweetness but it had a distinct fruitiness with slight acidity and minerality to round out the flavors. 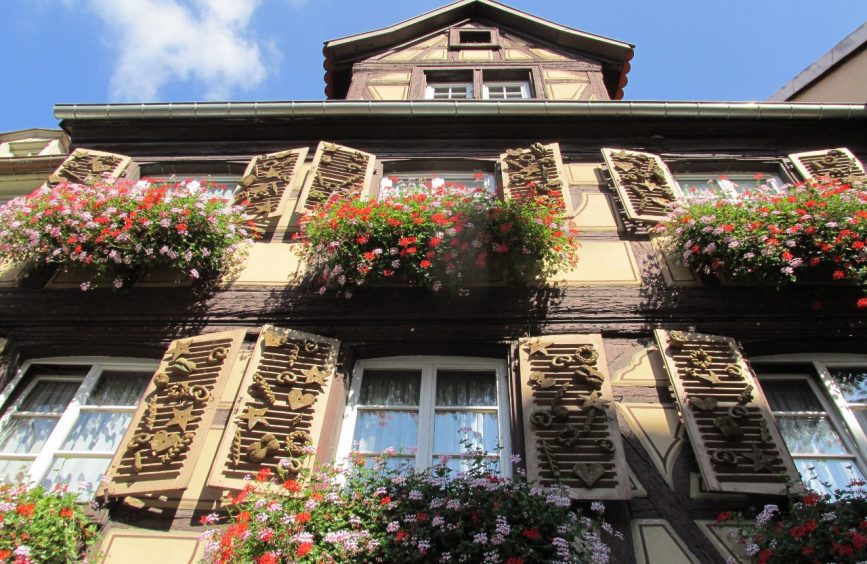 In the afternoon we drove about 15 minutes to the town of Colmar, known for its historic city center founded in the 9th century. The well preserved buildings with timbered gables were eye catching and formed the nexus of a bustling tourist market. The streets were lined with boutique shops and cafes while most of the visitors swiveled their necks trying to take it all in. Somber Gothic-style churches anchored the edges of the old town. Surrounding the historic center were regular-looking modern neighborhoods where real people live and shop. After navigating the strip malls and large big-box stores on the outskirts of town it took us awhile to grasp what was special but once we made our way into the old section we were impressed. There were many choices of places to eat so we grabbed baguette sandwiches and pizza slices at a small shop and enjoyed people-watching in the afternoon sunshine, doing our share of swivel-necked admiration of the architecture.

The second day we headed to another winery, Domaine Albert Mann, to experience an operation very different from the large, well established winery we visited the day before. Albert Mann is a family-run winery in Wettolsheim that has only been around for 25 years. In California, that would be a respectable amount of time but in Alsace that is very recent. They are proud to have practiced organic farming since 1997. Though they were quite busy with harvest, Marie conducted a thorough and efficient tasting of the popular Alsace wines described above. We were quite impressed with the quality of the wines with our favorite being the Grand Cru Schlossberg Riesling (2015). It was quite dry with floral notes. 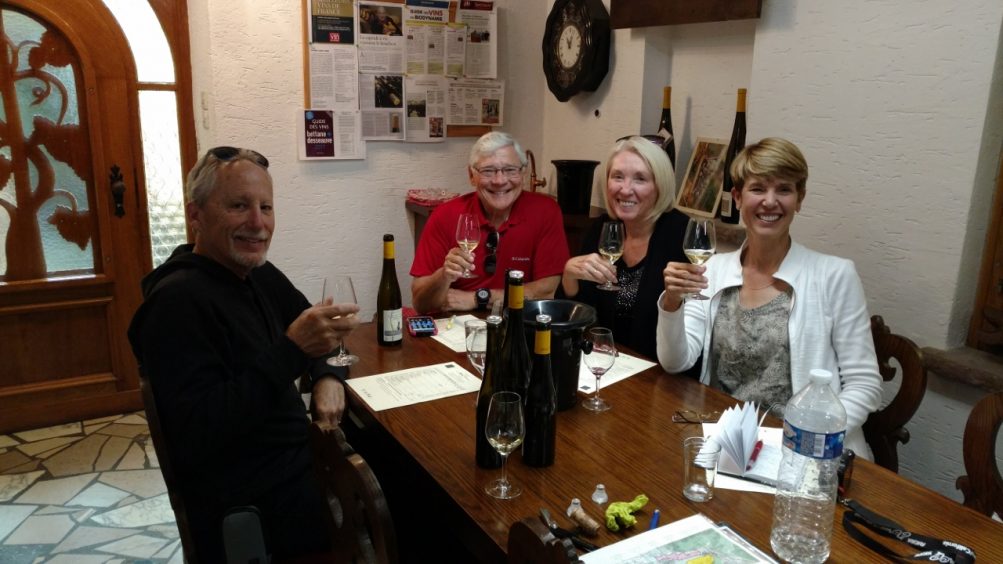 After the tasting we drove around small villages on the Wine Road without a specific destination in mind, stumbling into enchanting Turkheim, a small town with a more authentic feel than Colmar as it wasn’t swarming with boutiques and masses of tourists. There were visitors, to be sure, but it wasn’t overwhelming. We thoroughly enjoyed walking through the historic center, admiring the architecture and colorful flower gardens.

We spotted signs for Munster and I became intrigued with visiting the town where Munster (or Muenster) cheese originated. The cheese was stinky in the shop but delightfully mild to taste, along with the equally delicious baguettes. Munster is also known for its population of storks. We walked all around town looking for storks, neglecting to look up tin the sky until we saw other tourists pointing their cameras. We felt pretty silly when we realized the huge birds were nesting all over town on various rooftops. 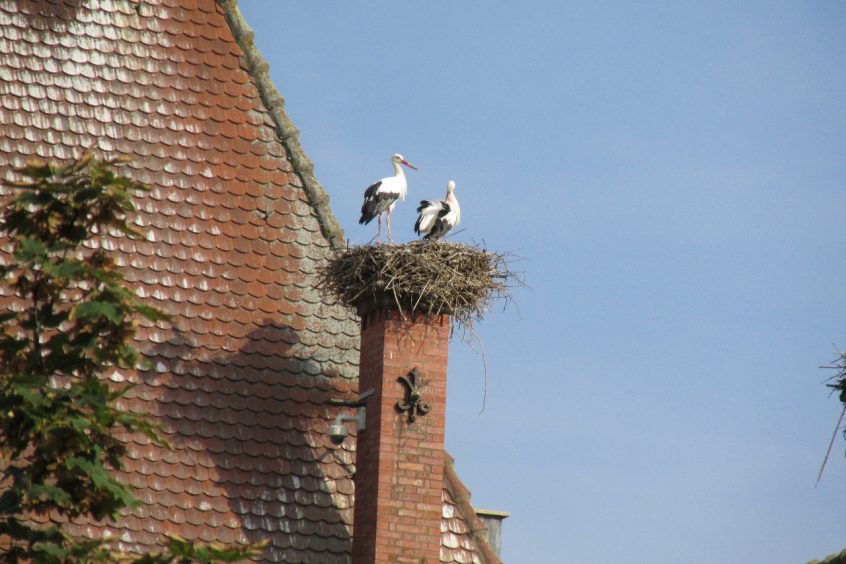 Our third day was spent at a place that would appeal to any motorhead who loves cars: The Cite de le Automobile in Mulhouse.  This is one of the largest car collections in the world, featuring 400 classic cars housed in a previous textile factory. Fritz Schlumpf was fascinated by European cars, especially Bugattis, which figure prominently in the collection. He started his collection in the early 1960s but eventually ran into financial difficulties. The collection was preserved, however, and now it’s a national museum that is well worth a few hours visit for those interested in the history of cars up through modern times. The museum even has an exhibition track where special events are held and visitors can test-drive a few classic cars. 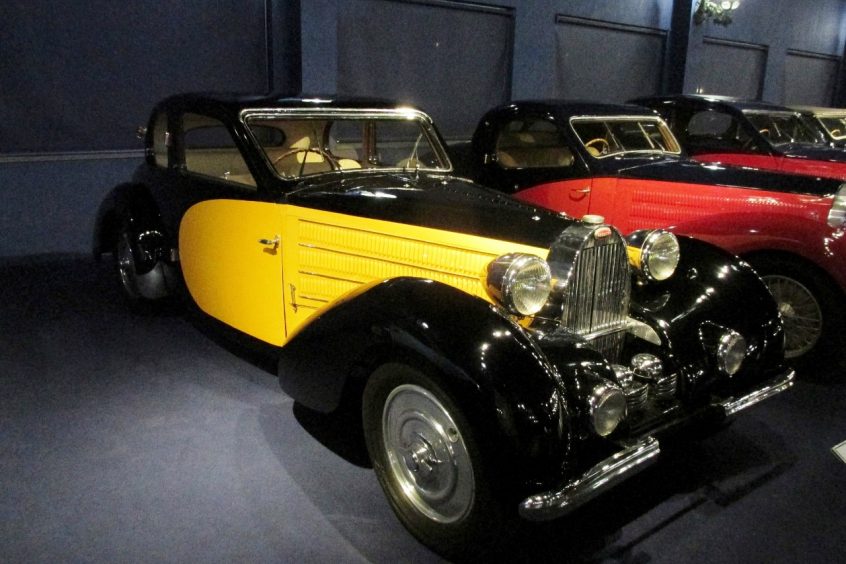 The southern Alsace Region has much to offer wine aficionados and those who appreciate charming countryside villages nestled into low hills and historic architecture.

Other articles about the region: