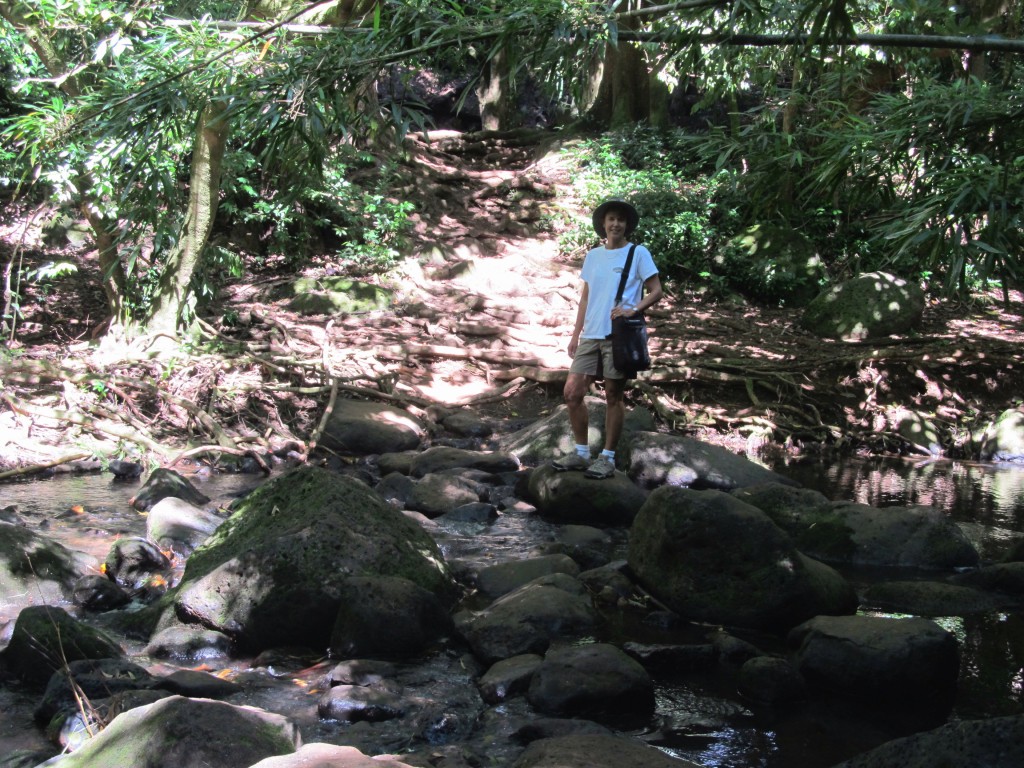 Rock hopping across a stream on the Judd Trail

The Judd Trail to Manoa or Tantalus via the Nu’uanu Trail is an energetic 5-10  mile hike (depending on which trail you take on the second half) in Honolulu, Hawaii that starts in Nu’uanu near on the Old Pali Highway and ascends up a high ridge to Tantalus and down to Manoa Falls. The trails are all part of the Hawaii Mauka Trail System. It’s ideal to access via public transportation, otherwise you would need two cars at each trailhead. The total time could range from 3-4.5 hours. If you’re looking for something more strenuous than the Manoa Falls Hike this is a good option. 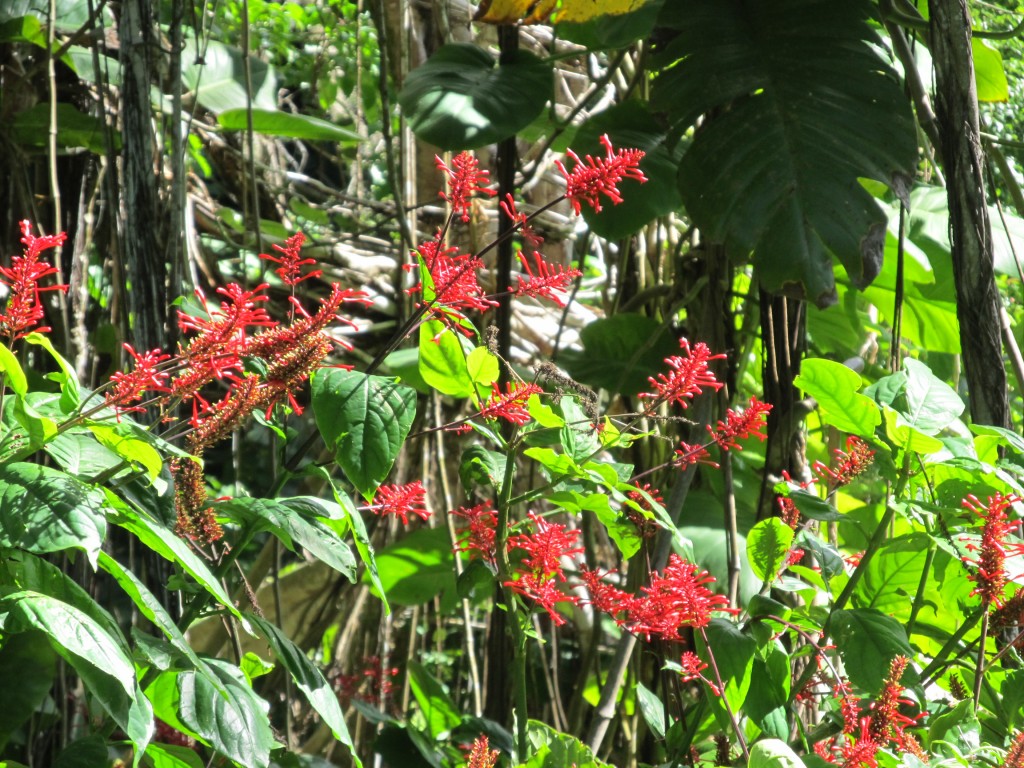 If you have a car drive to Nu’uanu Pali Drive and look for a small parking area on the right hand side of the road at the trail entrance, just after a concrete bridge. There is a sign announcing the Judd Trail. 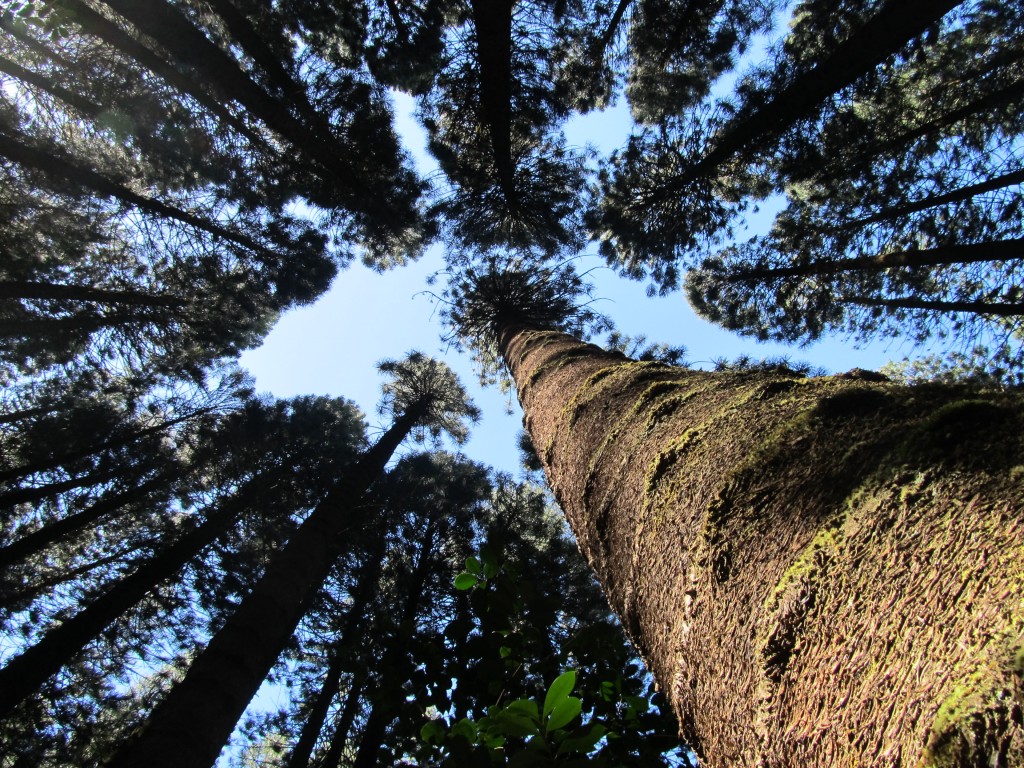 See map and description here. A note about the directions: mauka refers to mountain side vs makai, which is ocean side. Starting on the Judd Trail, a short loop (3/4 mi if you did the whole loop), turn right after hopping across boulders in the stream. The trail ascends fairly gently at first, winding through a Norfolk pine forest with roosters crowing in the distance. This hike is almost completely shaded, a nice feature on a warm, sunny day. 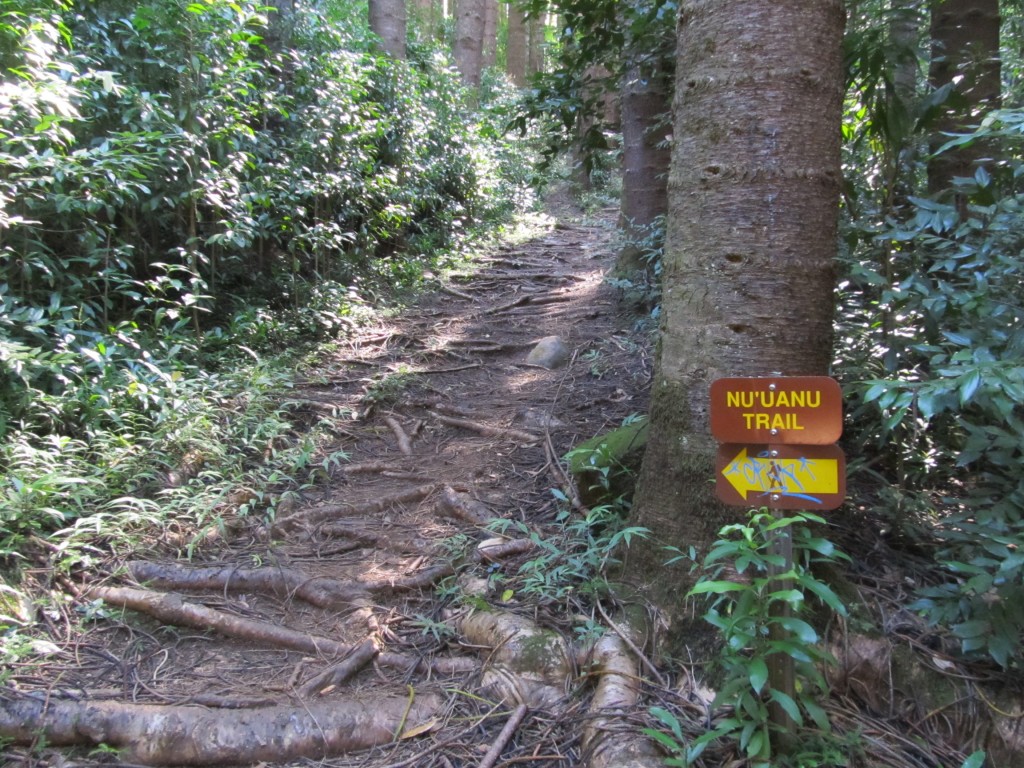 Transitioning onto the Nu’uanu Trail the climb gets much steeper and there are a couple of places where ropes have been placed, presumably to aid in the climb. We didn’t find it necessary but perhaps in muddy, slippery conditions the extra stability might be appreciated. After a steady 90 minute climb to the top, continue on a slender trail along the ridge. The slopes drop away steeply on each side providing wondrous panoramic views. In the distance Pearl Harbor is visible as well as the runways of the airport and Hickam Field, the skyscrapers of downtown, the beaches of Waikiki and the distinctive shape of Diamond Head glinting in the distance. On the other side a notch in the Pali Highway provides a sight line all the way to the Windward side of the island. A symphony of birdsong encouraged us along the steep inclines. After clearing the ridge the topography changes, with impenetrable bamboo forests replacing the Norfolk pine. Thick ropy roots and squishy mud can make walking a challenge, even on the flat or downward slopes. 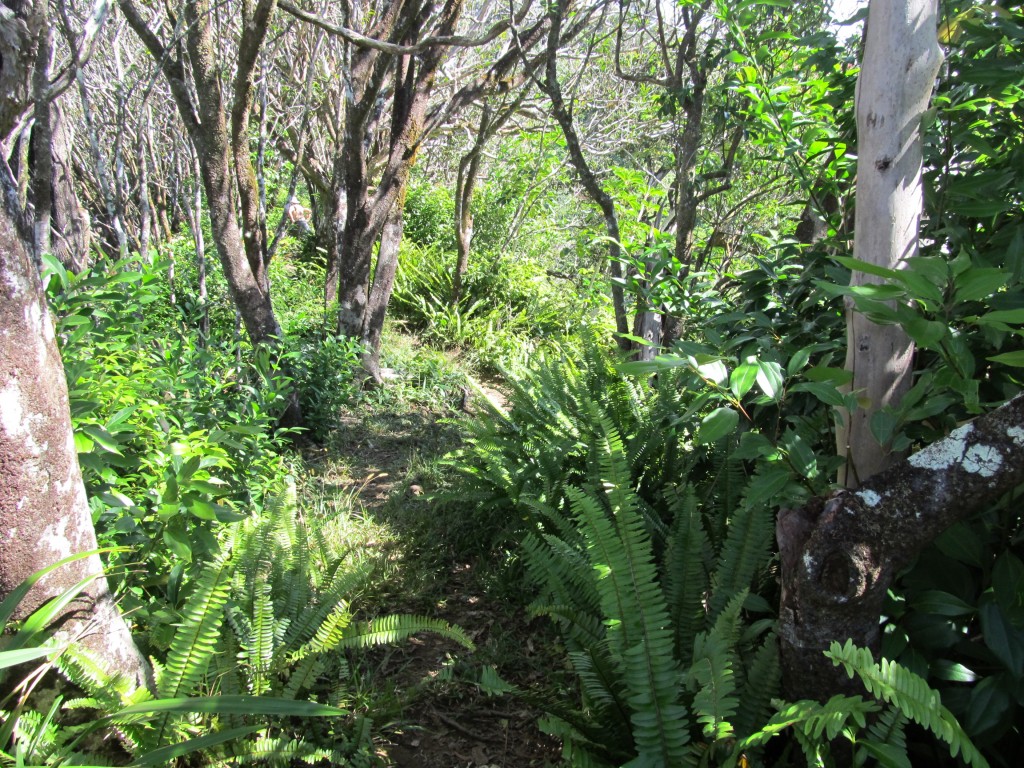 Take a left at the Pauoa Flats trail marker, then turn right at the Aihualama Trail if it’s open. The Aihualama Trail descends through a series of switchbacks lined with fragrant and colorful ginger plants guava trees and bamboo forests, finally intersecting with the Manoa Falls Trail. Although the hike is only five miles it took us three hours to complete due to the amount of uphill climbing and careful downhill walking on the thick knotty roots.

Alternate exit. If the ‘Aihualama Trail is closed and you’re a law abiding citizen, as we are, you might have to abort to the Manoa Falls exit. This will add 4-5  miles to your trip, making the whole hike about about 4.5 hours. Instead of turning left, you turn right at Pauoa Flats. You can take the Manoa Cliff Trail or Puu Ohia Trail down the mountain but all will get you to the Pauoa Valley above Punchbowl, rather than the Manoa Valley. 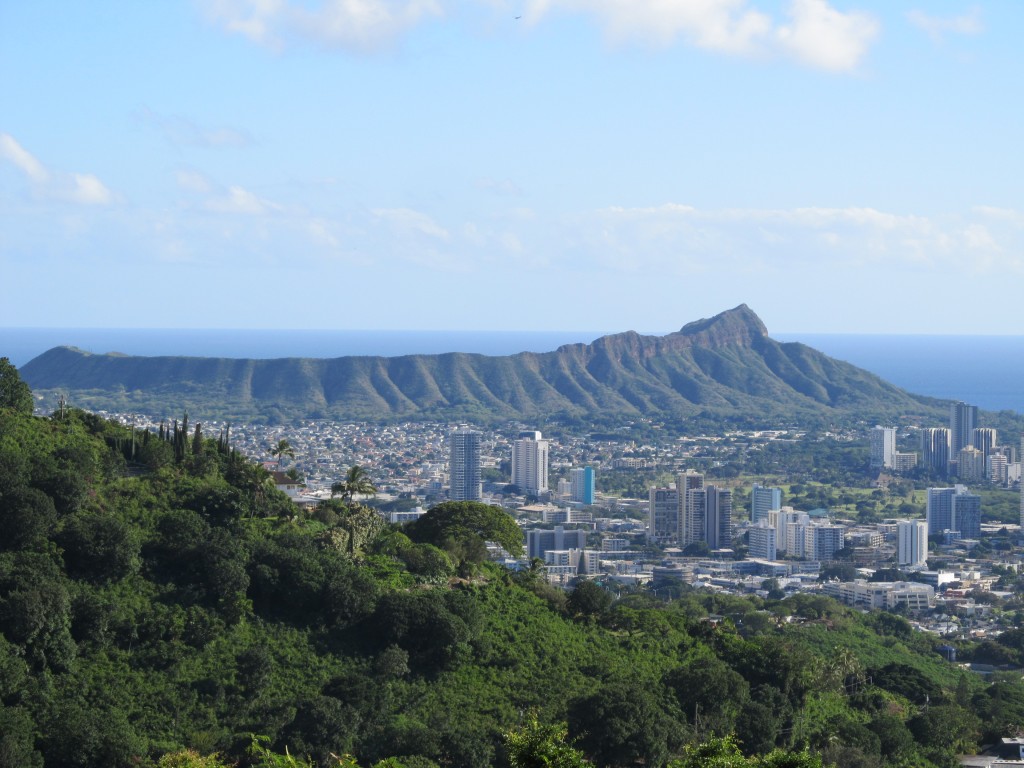 From the end of the Manoa Falls trail a half-mile walk to Manoa Rd and Kumuone St takes you to the bus stop where you can catch Bus #5 to Ala Moana Shopping Center, then one of the many buses going to Waikiki.

If you took the alternate trails to the Pauoa Valley you will end up on Tantalus Drive or the Hawaii Nature Center, depending on the trail you take. Catch the #15 bus, then transfer to the #6 to Ala Moana Shopping Center, where you can catch any number of Waikiki-bound buses.

The Judd/Nuuanu Trail hike is vigorous tropical hike to the top of a ridge with panoramic views in the Honolulu Mauka Trail System. If you’re looking for a more gentle introduction see the 1.6 mile Manoa Falls Trail. 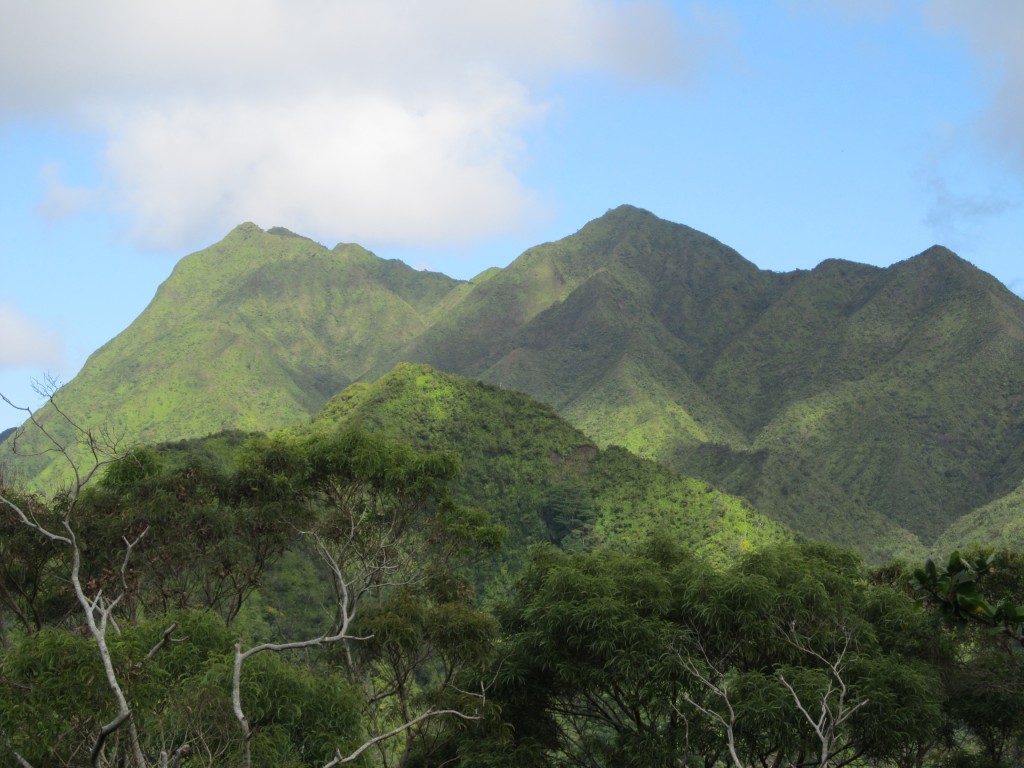 One response to “Judd Trail to Manoa: Hiking in Honolulu”