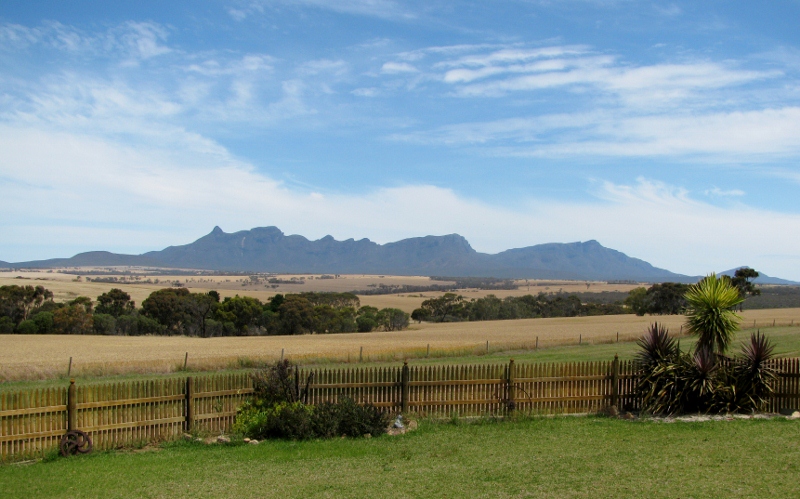 After lounging like Komodo Dragons in the tropical sun of Bali, we encountered a sudden change in pace, weather, well everything, when we landed in Perth. Before we get to that, can I just say how jealous I am that Perthites (otherwise known as sandgropers[?]) can reach Bali in 3 short hours? That’s 2 hours less than it takes us to get to Hawaii from SF. It was interesting to reach the shores of Western Australia and see a whole lot of nothing as we headed south to Perth.

The first shock was the weather. Though it is the equivalent of early summer, we arrived in cool weather, quite breezy, with frequent rains. Granted, we were acclimated to the tropics but I froze the first couple of weeks until we finally bought sweatshirts, which I’ve been living in.

The second shock was the impact of inflation here. It’s a double or triple whammy. Maybe quadruple. With the recession in the States many stores, like Macy’s, are practically giving things away. Here they have the opposite problem. The mines have been going crazy since 2003, competing for a limited labor pool, driving wages and prices generally up, up, up. Add to that the weak U.S. dollar against the Australian dollar and we had sticker shock after how impossibly inexpensive SE Asia was. The good news is we’re shielded from most of this since we’re on the farm and have virtually nothing to spend money on except food. 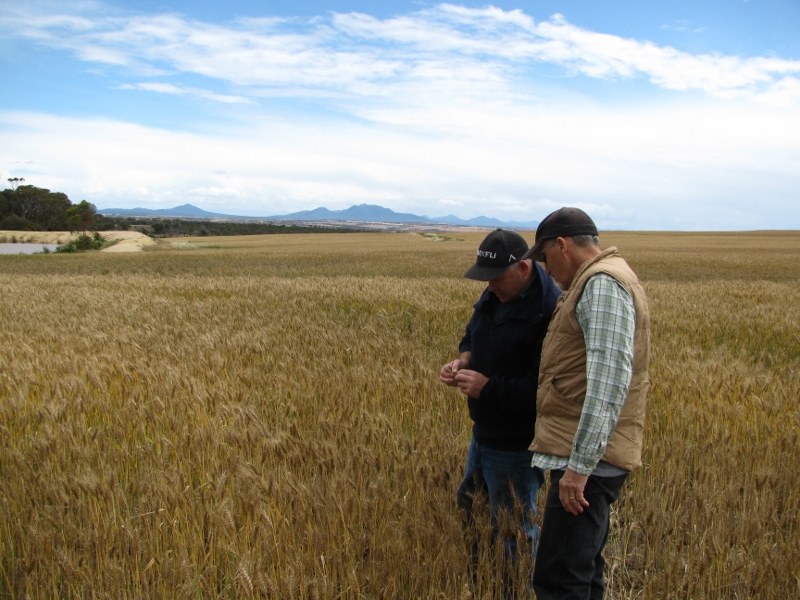 Steve and Phillip examine the wheat

We’re located about 252  miles southeast of Perth. The nearest hamlet, Borden, is a 20 min. drive away, pop. 164, and has a small grocery store, medium sized pub and large grain elevators. It’s located in the shire (county) of Gnowangerup, a Noongar (aboriginal) word for a chicken-like animal, the mallefowl. The nearest town of any size is Albany, pop. 33,600, an old whaling town on the coast, which has a big deep water port. It’s about 1.5 hours away by car, so planning trips to the store requires great care with the list. The distances are vast out here in the Great Southern region, and Phillip tools around in his small plane when he’s not hauling grain. It cuts the time to Perth from 4-5 hours by car, to 1 hour and 20 minutes.

Caralinga Farms is a large farm, 13,000 acres, and it’s hard to imagine that 4 men do the entire harvest in about 2 months. That’s the power of gigantic mechanized and computerized equipment. Phillip has converted to mostly crops, though he still fattens up some sheep some years. Wool doesn’t command the same price as it used to so crops are more profitable now. He grows canola (the seeds that produce the cooking oil), barley (for all that beer that Aussies drink), wheat, and lupin. Lupin isn’t just a pretty flower, it’s a feed crop that contains the full complement of amino acids, like soy, and can grow in temperate climates. It’s also a good nitrogen fixer so it’s a good crop to rotate to depleted soils. When we were here before the lupin was a brilliant shade of yellow, like mustard, but now everything has mellowed into soft tans.

The farmland around here is beautiful, with rolling hills of various shades of yellow, gold and brown. The many creeks and streams are lined with gum and jam trees, which breaks up the landscape in neat lines. The skies resemble the big sky country of Montana, with endless horizons, except for the dramatic backdrop of the Stirling Range, which most houses are positioned to see. Rising like the spine of an iguana to a height of 3,592 feet, it’s an unusual and important landmark in this area that stretches.

Here’s the backstory on why we’re in Western Australia. In college I roomed with Cindy and Kelli, and we’ve stayed good friends since then, along with the other half of our Chico Girl’s Gang, the trio of Wendy, Gail and Sue. Kelli went off and married an Australian sheep farmer, Phillip, who grows more crops than sheep these days. Years dragged by with us saying we’d visit, and finally we did, several years ago. Steve became enamored with the idea of participating in the harvest, evoking memories of his childhood on his grandfather’s farm. So here we are, from dream to reality, our very own Farmville experience. 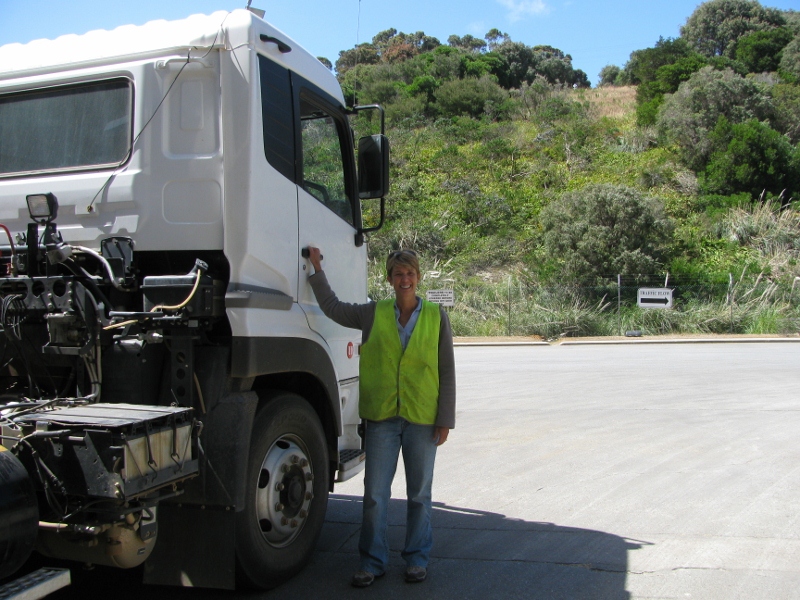 Steve is getting a crash course in farming, learning new lingo and equipment. Within the first few days he had been on about 20 kinds of equipment and as the season was just getting started there was a lot of repair work. They had had some rain and hail so “shatter” was a concern. Hail damage is covered by insurance so that wasn’t as much of a concern. We thought Steve would be running the dryer, but first the generator broke down and we towed it to Albany, and then it got sunny and windy, drying the crops.

They’ve been harvesting canola first and they play a lot of musical chairs, only it’s musical equipment, rotating between the “header” (combine harvester), chaser bin that “chases” the header to collect grain, road train (double tractor trailer that hauls the canola to Albany or Borden) and various trucks, utes and other equipment. There are a variety of “bins”, portable silos that get trucked around. The farm is in two parts, away, so it’s quite a convoy when they have to change paddocks, with Kelli leading the way with a sign that says “wide load”.

The hours are grueling, especially for canola, which they can harvest into the night. They rotate shifts: 2 guys do a short shift of 12 hours, alternating with a long shift of 18 hours. It’s intense harvesting at night and you really have to be on your toes. Steve described multiple moonrises as they disappear into a dip and then re-emerge, seeing the moon come and go. And he’s just doing this for fun and experience! It’s not uncommon for Phillip to make 3 runs to Albany in a day, starting at 5:30 am, delivering of grain each time. I learned a lot when I delivered grain with Phillip one day and saw how the grain was analyzed and transported. Anything less than 8% moisture is ok, and we’re running about 6-7%. You can have a small amount of insects and we had 3 in the sample. Protein was about 20%, with oil about 45%. There is also chaff and other matter, referred to as Admix, which we had 1%. 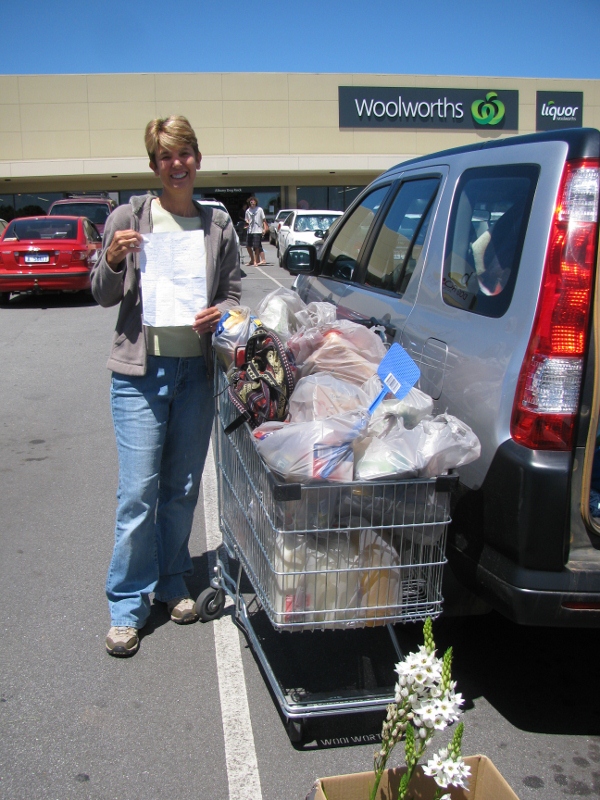 Inga with her grocery list and an overflowing cart at “Woolies”

Field support takes place at home with the domestic partners keeping the men fed and clothed. I don’t have that much to do but I’m up early to make lunch and up late to see Steve because I only get to see him about 20 minutes a day. It’s a crap shoot whether they’ll make it home for dinner so I plan meals that aren’t too fussy. I pack a lunch for Steve, the guy who usually doesn’t eat lunch, including 2 sandwiches, energy bars and fruit. For the long nights I also pack dinner in an aluminum to-go dish with a cardboard top. They have portable ovens that look like a cooler that are plugged in to a cigarette lighter to heat the dinners. I’ve been making batches of spaghetti, chicken and fried rice for dinners. Lamb is plentiful so my freezer is stocked with chops, shanks and stew meat. Yum. We also have unlimited eggs from the 10 chickens, so Phillip popped 3 dozen in our refrigerator. Kelli has a nice big washing machine, and we hang our wash out to dry in the sun. We have our own 3-bedroom house out back, and I have my own clothes line. The trick is timing the drying operation between rain showers. The other trick is keeping the clothes on the line, as Sam, the free-range, pet cockatoo loves to peck the pins off the line and redistribute my underwear all over the adjacent fields. 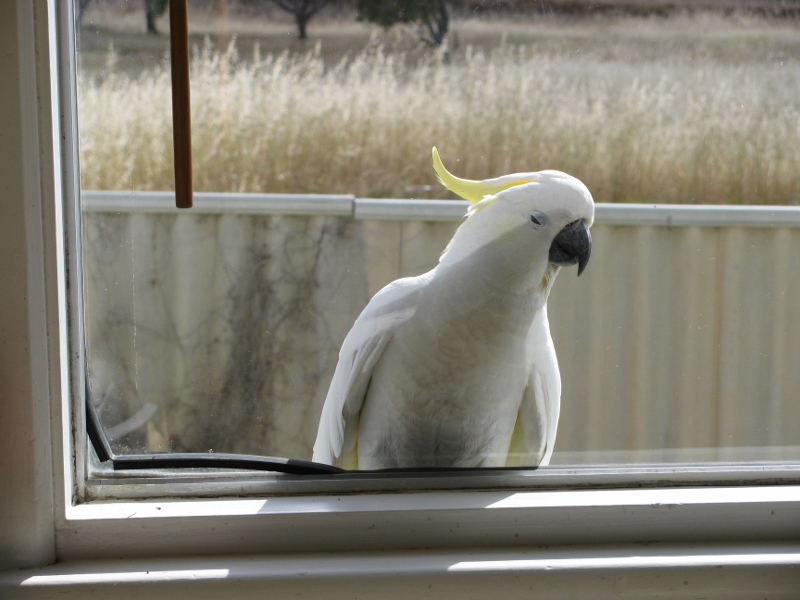 I’m interested in the “chooks” since I thought it would be fun to have chickens in Sonoma. I love gathering the eggs, usually 5-6, but sometimes only 1. We save all of our food scraps and dump them in the yard in the morning. They don’t really have predators but we lock them in the hen house at night when they are roosting. The chicken yard is an interesting journey down a historical or archaeological culinary history, with lamb carcasses, oyster shells, lobster claws and more littered about. I think it works better than regular composting—less mess. I did have a major failure of my duties one day when I didn’t latch the door properly and all 10 chickens had an afternoon romp of very-free-range. It took all afternoon to pry them out of hiding places. Mack, the sheep dog, tried to herd them, but they don’t herd up as well as sheep.

In addition to Sam there are flocks of wild parrots everywhere. The trees are full of pink and grey parrots, called galahs, and bright green ones. Sometimes Sam hangs out with them, but he’s spoiled and gets to come inside where he acts like a 2 year old, pecking at the furniture and pooping all over. He comes over to my house and pecks at the window loudly until I let him in. Then he pecks at the remote TV buttons and throws it on the floor to get attention. Mack is a working dog so he’s not allowed inside, but shhhhh, don’t tell Phillip, he has been known to curl up in the center of my bed or couch and take a snooze. Phillip acts stern about all the animals but I see him out there fluffing Sam’s feathers.

We definitely feel like we’ve been transported to another place and time, and it’s a fantastic experience to be able to be a part of a different lifestyle, rather than just pass through it. It’s not always easy but it has given us a greater appreciation for what it takes to bring in a crop. 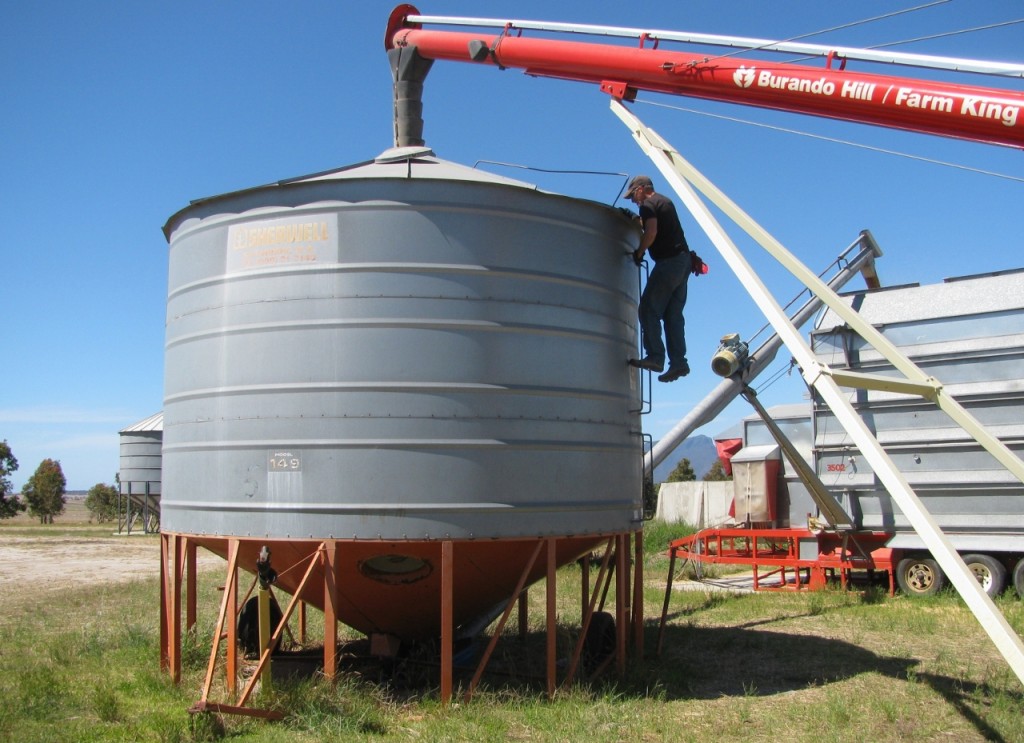 Steve gets a workout every day

All photos by Inga Aksamit.

SE Asia Travels-Update from the road

The harvest that wouldn’t end

2 responses to “Farmville in Western Australia”