Handling bills and other financial matters from another country used to be a giant headache back in the day when I was a child growing up in South East Asia. In this era, thanks to online banking and bill paying, it’s pretty easy to manage your finances when you’re traveling much the same way as you do from home. 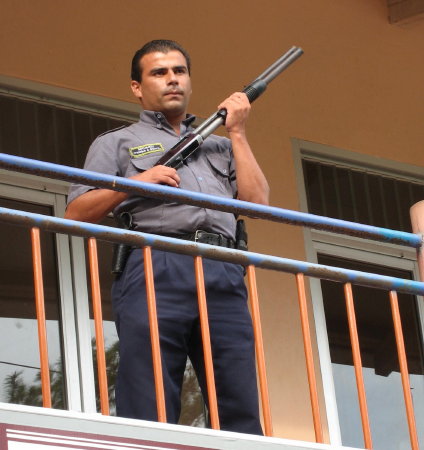 Security was tight at a bank in Costa Rica

In our case, preparing for a months-long journey took a little planning, as we hadn’t yet automated everything. Several months ago we began tracking all of our bills to make sure they were all being captured on line. We made a simple spreadsheet and as each bill came in we systematically pursued on-line options.

We learned that, although we are able to pay every bill online, we were not able to get every bill routed through our on-line banking system from Bank of America. For some, like AAA, we’ll have to go on-line to their site to find our bill. A few provide email notification when a bill is due. For some critically important bills like the mortgage we decided to pay several months in advance so we wouldn’t have to worry about it.

We thought through all the bills we could think of that would come through while we will be away, especially the ones that are annual or less frequent. For example, my nursing license will expire while I’m gone and. While I can renew on-line, it has to be within a 90-day window of expiration, so I had to make a note to myself to remember to renew online during the trip. I also had to make sure I had all of my continuing education credits. I was a little short so I quickly found some free, on-line courses from Nurse.com and completed those before I left.

For our property taxes, which are due twice a year, we found that we could semi-automate the payment. We called ahead to confirm the amount and set up online payment. 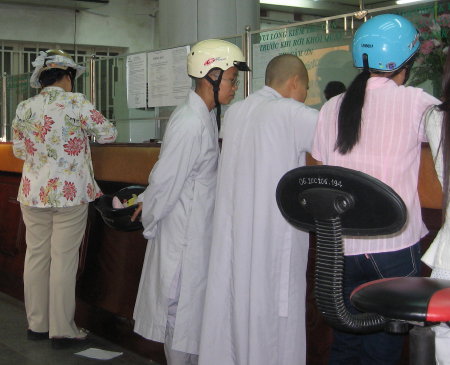 While on the road we’ll use a combination of credit cards, ATM and cash.We used to also use traveler’s checks but U.S. banks have mostly stopped issuing them. It’s handy to have US dollars, which are just about universally accepted. Some ATM machines in other countries can’t read U.S. ATM cards, but if you take it to a major bank they can usually perform the transaction manually. Some have limits on how much money you can withdraw in a day. In Italy it seemed like we were dipping into the ATM machine multiple times a day, and we quickly ran into our upper limit.  With a quick phone call to the bank we were able to increase our ATM limit, much to our chagrin.

Foreign transaction fees for currency conversion are associated with credit card use and ATM withdrawls so it’s best to check with the issuing bank so you’re not surprised. They generally charge 3% though there are some differences (see chart). We never take a cash advance from a credit card—fees can range up to a whopping 20% or more. We try to avoid using currency exchange kiosks at airports as the exchange rate will never be as good as an ATM or credit card, though occasionally we exchange a small amount of money for our initial transportation needs.

My credit card was being charged for some hotels we were arranging for the first leg of the trip, which the fraud division of the credit card company initially blocked. I let them know all the countries that might be involved and the date of departure so they would let the charges go through, but we had to call a different number to handle charges once we were on the road.

One of our credit cards provided an on-line method for travel notification where we could enter the countries we would be visiting within a 30-day period. Unfortunately we have to repeat this process every 30 days. For a second credit card I had to call customer service, gave them all the locations for the entire trip and no subsequent calls are necessary. I called customer service for our debit card and was able to give them our travel plans for 90 days, at which time we’ll have to call again. We’ll all these tasks to our tracking spreadsheet so we can keep it all straight. It just goes to show that each card handles these matters in a different matter.

Going to the bank, which is a lost activity for most in the U.S., might seem like a hassle, and indeed, it is often time-consuming. However, it’s all part of experiencing the culture and customs of other countries. I rather enjoyed our lengthy wait in Ho Chih Minh City when we needed to cash in some traveler’s checks as it was refreshingly air-conditioned, provided endless, free, cups of chilled, filtered water and was a welcome respite from the mid-day heat. Watching the elegant Vietnamese women float across the marble floors in their graceful, flowing au dais (traditional Vietnamese clothing comprised of loose pants and long tunic) as they moved currency and paperwork from the vault to various desks made me feel acutely clumsy and encumbered in my Western clothing. Another day, in Nha Trang, I was amused to watch person after person dash into a small, crowded bank proudly sporting their motorbike helmets on their heads as they conducted their business. Two monks clad in flowing robes looked slightly less serious with their helmets on, later hopping on their motorbike, robes billowing in the wind.

Steve created a handy wallet-sized currency conversion chart for all the countries we plan to visit. While it doesn’t take into consideration daily fluctuations in the exchange rate, it is helpful for estimating costs on the fly, especially for currencies with lots of zeros like the Vietnamese dong, currently at around 21,000 dong for US $1.00. Running across the top of chart he listed US $1, $5, $10, $15, $20. Along the left side of the chart he listed the various currencies we may be working with, including the Hong Kong dollar, dong, kip, reil, baht, ringgit, and Australian and New Zealand dollars. Then he filled in the various amounts per US values. He printed it in the size of a business card and “laminated” it by covering it with clear packing tape. We have a small calculator with us but find that this chart is usually all we need. You can find a similar, printable tool at Yahoo Finance.

I carry a Baggallini Small Wallet Bagg that is sturdy and not too bulky. There is a front pocket that is big enough to slip our passports in, and the main compartment has a zippered section for bills and two smaller zippered pockets for change and other small items. I can slip a small camera or my Flip video camera in there. There is a sturdy shoulder strap so I can wear it cross-wise across my body and I never let it out of my sight. It’s flat enough that I can keep it on my lap during meals under my napkin and not be tempted to place it on the floor or back of my seat where it would be more vulnerable.

We have a money belt but in the sweltering heat of the tropics it isn’t that comfortable. We split up our cash between us, and in the safe in the room, if available. My husband, Steve, puts money in different pockets. Basically, we try to make sure that money is dispersed across several locations.

So far, we’ve been lucky and have never had any problems with loss or theft. The worst that has happened has been of our own doing. Once, jet lagged, we had a layover in London en route to Dublin, Ireland, and had the bright idea to use the time efficiently to change some money. Imagine our surprise when we tried to use pounds in Dublin, only to realize, through the fog of sleep deprivation, that Ireland used Euros. We felt pretty silly.

Taking care of business is not the most exciting part of travel, but with a little research and preparation, can be handled with relative ease. 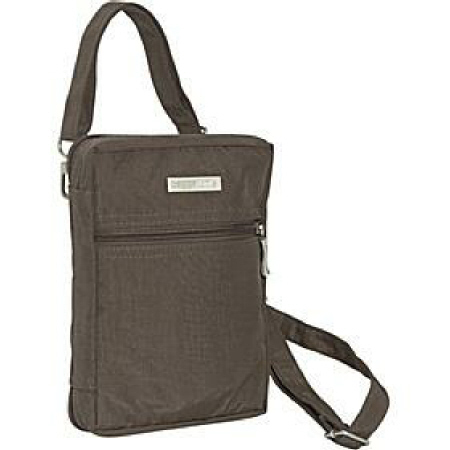