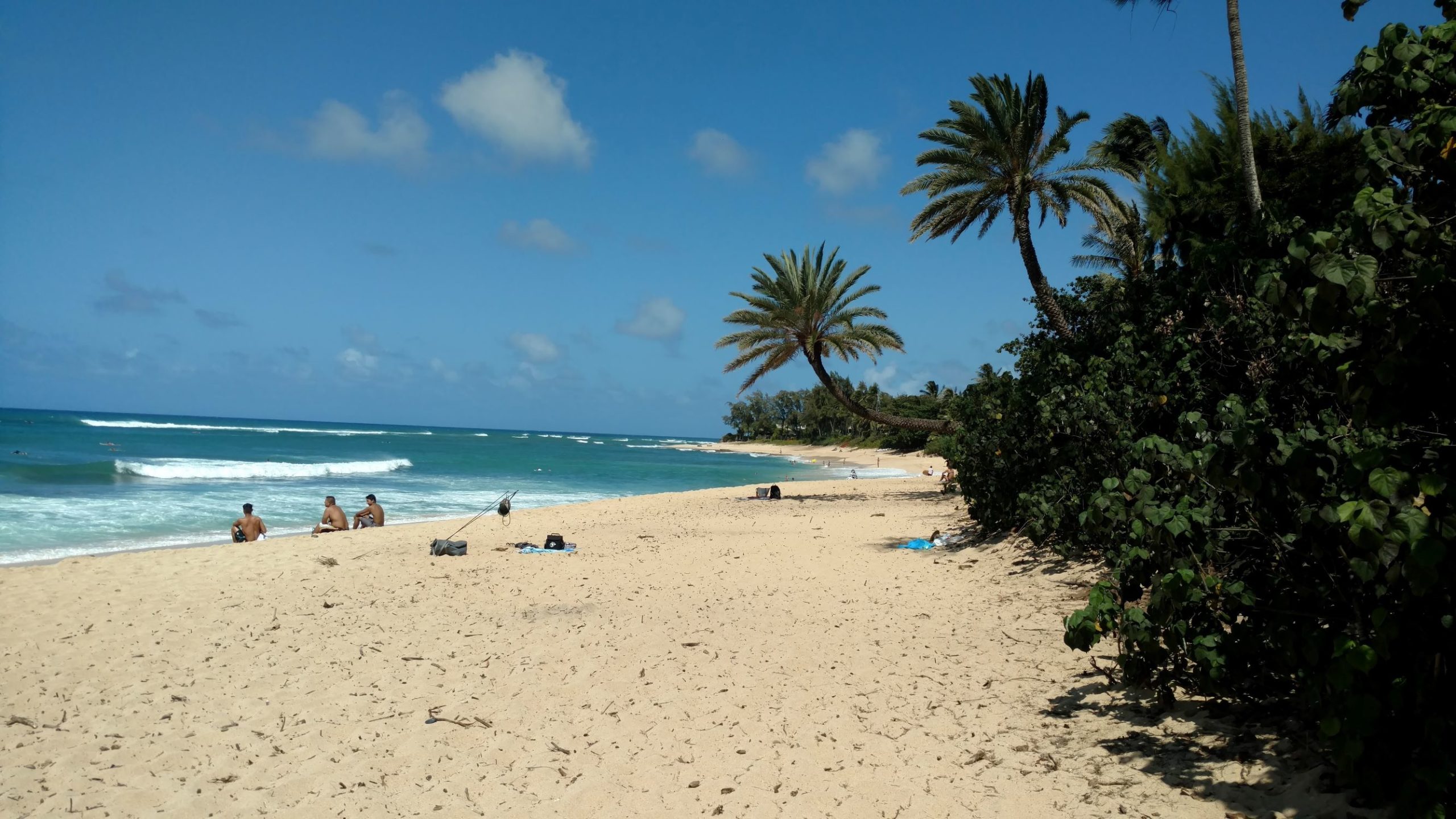 Unlocking the Secrets of the North Shore, Oahu, Hawaii

No stay in O’ahu, Hawaii is complete for us without at least one day at the North Shore, and sometimes we rent a house and stay there the whole time. There are no high rise buildings and no shopping malls, just miles of gorgeous beaches, laid back people and small town charm. To get there, get a map and drive from H-1 to H-2, which merges into Route 99 to reach Hale’iwa.

Though there are no shopping malls the town of Hae’iwa, which anchors the area, contains many unique shops that line its main street, the Kamehameha Highway. Surf shops, crafts, clothing stores, ice cream parlors, shave ice outlets and restaurants can be had, and an afternoon spent strolling around town is a satisfying way to spend a couple of hours. We always savor a meal at Cholos, featuring tasty fresh Mexican food in a casual open-air environment, followed by a cone of creamy homemade ice cream down the street at Scoop of Paradise. You’ll see long lines of tourists at the shave ice place, but for us the ice cream is the better treat.  For dinner we often dine at Haleiwa Joe’s at Hale’iwa Harbor, where we can savor fresh fish and island favorites, and sometimes chat it up with Joe, who will direct us to the freshest item on the menu.

The Hale’iwa Harbor is ground zero for boating activities.  Fishing with Grand Slam Sportfishing out of the harbor is a great way to spend the day if you are interested in catching your own ono, tuna, marlin or mahimahi. We’ve also taken a group out for a relaxing sunset sail with Northshore Catamaran Charters.

The beaches of the North Shore are world renowned for generating some of the largest waves in the world, but only in the winter. Surf competitions are plentiful in the winter and we’ve spent many happy hours watching some of the best in the sport compete on the beaches of the North Shore during the Triple Crown of Surfing, held in November-December each year. During the summer, however, the water is flat and serene, rendering it safe for swimming and snorkeling. To reach most of the beaches turn right at Hale’iwa on the Kamehameha Highway and continue toward Waimea Bay and beyond.

Hordes of people descend on the beach at Waimea Bay, a beautiful stretch of curved sand completely devoid of trees or shade of any kind so we avoid that beach in favor of less crowded and more varied beaches. Foodland, a local grocery chain, is a hub of activity, representing a good place to get supplies for a day at the beach, and a convenient landmark for getting oriented and providing directions. Drive to Foodland and you’ll find Three Tables Beach and Shark’s Cove across the street.

Three Tables, adjacent to Shark’s Cove is a nice beach lined with trees, providing good shade opportunities, and good swimming. You can spot the three flat expanses of rock in the water, which provides good snorkeling if the waves are flat.

The most popular spot for snorkeling is Shark’s Cove, due to the naturally formed lava walls that created a large protected pool and cove. The shallow tide pool is completely surrounded by rocks, waves sometimes crashing over the barrier, providing an ideal place for beginner snorkelers and kids. The cove, which is partially surrounded but open to the ocean, teems with brightly colored tropical fish and is deep enough that divers can often be found exploring the underwater caves and tunnels located between 15 and under the surface. Sea turtles tend to congregate near the far wall of the cove, placidly pawing through the water, staring back at snorkelers without much curiosity.  Here’s a list of commonly found fish:  butterfly fish, parrot fish, damsel fish, surgeon fish, tang, wrasse, big eye, perch, chub, trigger fish, goat fish, jacks, mullet, cornet fish, needle fish, eels, turtles. There isn’t much of a beach due to the rocks, and reef shoes are recommended to blunt the effects of the sharp lava.

Sandy beaches are plentiful nearby, so we usually get our snorkeling fix at Shark’s Cove and then move to a more appealing beach for relaxing in the sun and surf. Further down the highway, Sunset, Banzai Pipeline and other beaches are also favorites, each with its own character. Most beaches have parking, restrooms and outdoor showers.

Locally famous Ted’s Bakery is worth a stop to sample homemade pies, especially haupia (coconut) pie, which is creamy and delicious, and often the source of the haupia pies found in local grocery chains. They also serve traditional plate lunches, if you don’t have time to head out to the shrimp trucks.

When it’s time for lunch we head further on Kamehameha Highway in search of succulent shrimp. Near the town of Kahuku lies shrimp ponds, and portable shrimp trucks can be found at various spots along the highway, usually with an awning and some picnic tables on the side of the road. Stop at any one of them, order a plate of shrimp and get ready to get messy. A delicious meal of shrimp, freshly harvested and boiled in the shell, either plain or with garlic or other seasonings, along with fresh corn on the cob, is a treat we always enjoy.

The Waimea Valley, a sacred site in Hawaiin history for more than 700 years, has undergone several waves of development, first as a ranch, then as an adventure park. Now operated by the Audubon Society it hosts a 150 acre arboretum and cultural center. The best part about the pleasant stroll through the arboretum, in addition to seeing some fine examples of tropical flora, is plunging into the deep pool at the waterfalls at the far end of the property, so remember to bring your swim suit and a towel.

We refer to the Kaunala Hike as the “Boy Scout Hike” as the trail head originates near a large Boy Scout camp on the North Shore. From the Kamehameha Highway, turn right at Foodland on Pupukea Road. Drive to the end of the paved road, then start walking along the dirt raod past the Boy Scout Camp. When you reach a junction, keep left and at the next junction, which has a sign turn left and keep to left. Continue around a hill and you’ll be working in and out of gulches, overall in a clockwise direction, eventually connecting back to the Boy Scout Camp.

View from the Boy Scout Hike

In the gulches you’ll see ti plants, whose long shiny fibrous leaves, introduced by the original Polynesian voyagers, provided house thatch, skirts, sandals, sap to stain canoes and surfboards and a popular sporting activity, ti-leaf sledding. Paperbark, kukui and, strawberry guava trees, as well as native sandalwood and koa trees can be found along the ridges and dirt roads. Koa is a hard, durable wood used by Hawaiians to build canoe hulls, today used to make fine furniture. As the trail ascends good views of the north shore and peaks of the Wai’anae Range are visible.

There are no big resorts on the North Shore, save one, Turtle Bay Resort. There are many vacation rentals that can be accessed through VRBO or Hawaiian Beach Rentals.

Beyond the Beaches of Waikiki, Oahu