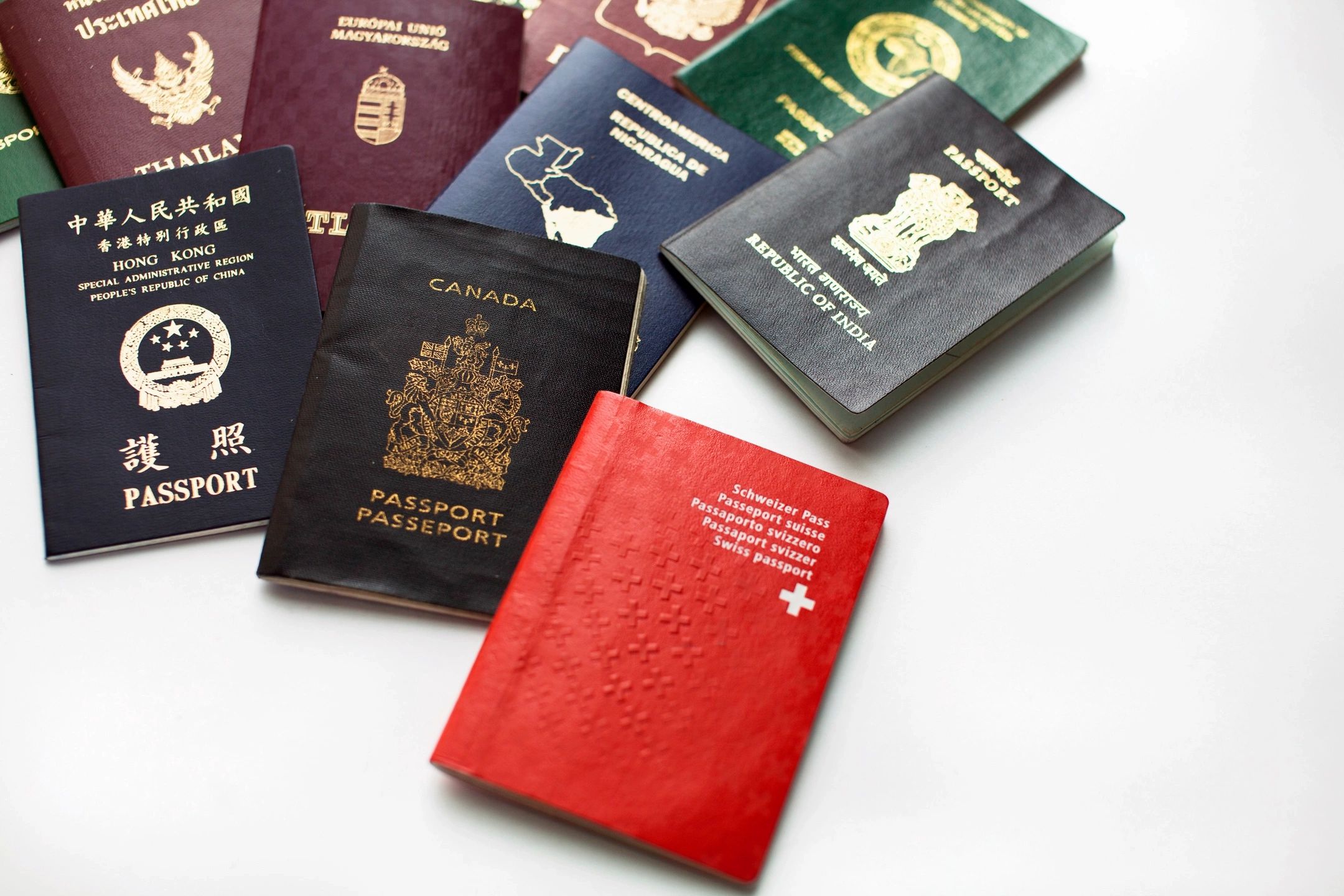 Uncovering the Mysteries of Passport Colors

I leaf through a green passport, issued in 1962 in San Francisco, my first passport. I’m four, pictured with my mother in our shared US passport. Mom’s name and characteristics are noted, but mine are not, so my identity is murky. Below her brunette hair styled in a high bouffant, Mom is smiling slightly, while I have a trace of a childish pout. In my collection of passports of different colors, the world starts with me as any previous passports of my parents have been lost in too many moves. Dad’s would have had stamps from Afghanistan, his first overseas assignment as an irrigation engineer, and Mom’s would have had Spain and Portugal, where she was taking a break from her airline flight attendant job when she met Dad. Our globetrotting lifestyle was destined to be with these two.

The stack of passports of different colors forms the scaffolding of my life. A life spent circling the globe as a third culture kid in an expat family.

Read: What is a Globetrotting Third Culture Kid?

I stare at the small, square photos of me and my parents, the people who formed my foundation, and youthful, vibrant versions of us stare back. The design of our life had no plan, but grew haphazardly like tumbleweeds blowing in the wind. Now I’m an archeologist winnowing unknown truths out of these artifacts. I’m lost in time as I sort through the passports, finding thumbnail sketches of my life, brief facts, colorful stamps, dates of entry, expiration dates, visas and the richness of our life between the lines.

My mother and father are gone, a stroke snatching Mom like a tornado abducting a rag doll, while Dad lingered, his radiance dimming with each passing day until his flame extinguished. Our shared memories, now fused together, leave me wondering. So many questions, starting with the colors.

Why is there a petite pile of green passports, issued in the 1960s, next to the taller tower of blue passports from the 1970s and beyond? We didn’t change nationality, so our nation must have changed the passport colors. But why? It was a mystery. In long queues snaking toward barred windows at airports, I’ve observed travelers proffering their passports of different shades. What authority prescribes these colors for their people? These questions haunted me, driving me to unravel the mysteries behind the pigments.

Colors associated with political and cultural symbols shift over time but are rooted in mores and mythology. There are only four main colors– red, blue, green and black–but many hues that countries have chosen for passports, though no entity regulates this. It’s common for countries to issue several different colors for regular, diplomatic and other travel categories, but I will focus here on regular passports.

Starting in 1775, the first US passports were simple paper certificates, and it wasn’t until 1926 that red booklets were issued. In 1941, the color was changed to a mottled moss green. In the Bicentennial year, 1976, navy blue was chosen as part of the national anniversary celebration and this is the current color.

Blue passports, like my US passport, commonly tie together the countries of the New World in the Americas and Oceania. When I first learned this, I drifted into a reverie about all that cobalt blue water lapping at our shores in the US, Canada, Central America, South America and the Caribbean. Besides water, the cerulean sky, which can be reflected in water, has been associated with the concept of truth in history, a noble concept. Blue also represents peace, freedom, and inspiration.

Most Muslim countries, including Iran, Saudi Arabia and Pakistan, have green passports as green was purported to be Mohammed’s favorite color. I envisioned Mohammed traversing an arid desert, climbing a series of barren, rocky hills and gazing down into a verdant valley filled with date palms. Green, then and now, is a rare and beautiful sign of life in the desert. Several West African countries also use green to show that they belong to the Economic Community of West African States. Green is linked to growth, nature, and wisdom.

Red is often used as a passport color in countries with a communist history such as China, Russia and Georgia, but burgundy is also used by many European Union countries. Red is a color often coupled with passion and strong emotions such as life, vigor, war and religious zeal. Red blood leads to vitality and vigor or runs free during the perils of war and drains life away. When emotions run high, blood rushes to the surface with a rosy flush.

Black is an uncommon passport color used by some African countries and New Zealand. Black is the absence of color, and some ancient cultures believed it was the color of mystery and wisdom. New Zealand may have based the color on Maori traditions that associate black with the long darkness before the world emerged. This symbolism is carried through to their rugby team, the All Blacks.

The blue passports remind me of all the azure oceans I have roamed, all the still sapphire seas I have swum in, all the mirrored lapis lakes I’ve plunged in, all the rushing royal blue rivers I’ve run, even the solid iceberg blue in glaciers I’ve climbed. The green ones take me back to olive groves in the Mediterranean, emerald-swaddled mountains in the Alps and thick, lush meadows in the Sierra Nevada that have lured me with the promise of vibrant life, perhaps with an accent of fiery scarlet wildflowers contrasting with black volcanic rock pushing out of its mantle. Political affiliations come and go but the basis of earthly life is contained in the symbols of our ancient ancestry–truth, wisdom, passion and freedom, all expressed in color.

My green and blue passports sit in a single stack representing a life comprised of a kaleidoscope of color, a coalescence of cultures that was built through a lifetime of movement. The design is nearly complete, the structure nearly concluded, a transcendent gift from my parents that lives within me.

This story was originally published in Medium.com.