For a lightweight pack, the Gossamer Gear Mariposa feels beefy. The shoulder straps and hip belts are thick and sturdy. You can feel the slim metal frame that provides support when you grasp the top of the pack. A foam pad provides additional structure and support to the back and doubles as a removable sit pad. With the built-in hip belt pockets, bladder pocket and relatively large capacity of 60 liters, it’s easy to think the weight must be adding up. But it holds the line at just two pounds for the medium size. 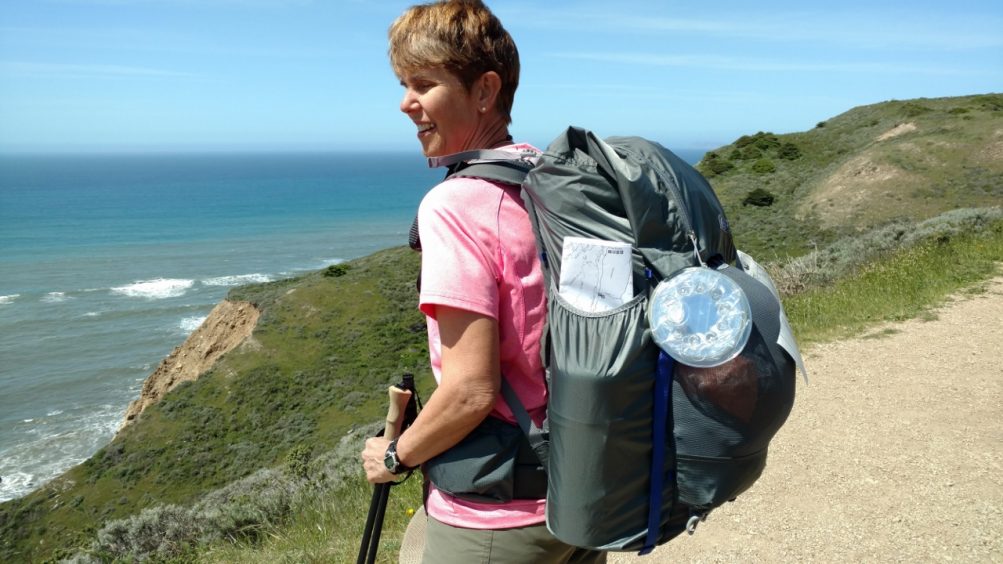 I’m in search of the elusive perfect pack, which may or may not exist. Last year I tried a 1.5-pound cuben fiber pack that was initially comfortable, but on a 15-day hike on the Pacific Crest Trail, became increasingly torturous. I was happy to have the opportunity to try the Mariposa, a long-time favorite among the ultralight crowd. The first thing I noticed when I tried the loaded pack was that it felt rock solid on my back and hips, a feeling that never dissipated over my 10-mile spring backpacking trip to Pt. Reyes National Seashore. I thought the shoulder straps might be a bit wide but the ergonomic curve felt right and I didn’t notice any rubbing or chafing. So far, so good.

The pack has what I consider to be an ideal number of pockets, including: 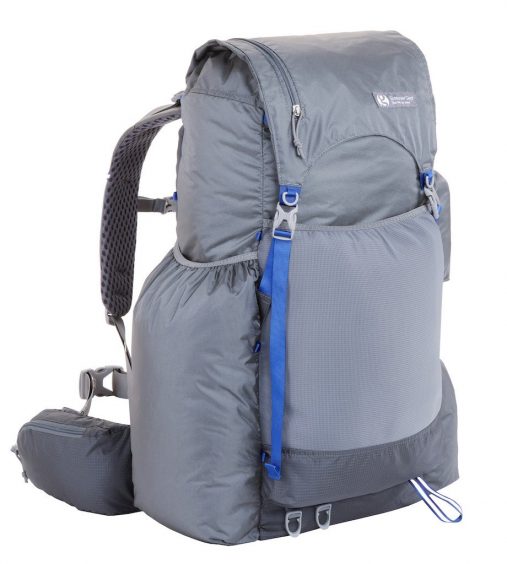 The interior of the pack is spacious. One feature I had to get used to is the long collar. The interior holds 36 liters up to a seam in the collar at the top of the pack. The collar extends a full foot beyond this seam. When you hold the top of the collar it feels like you’re looking into a long tunnel. The Garcia bear canister fits vertically, but it’s helpful to slip it into the tunnel first, then pack other items around it and in the pockets. I don’t generally need that extra foot so the top just folds over to clip in two places. I was perplexed by two very small clips on the interior edge of the top, but finally realized that they clip to each other to gather up some of the extra material when the full capacity is not required.

Inside, the metal frame is visible, secured by a Velcro fastener so it can be removed (the frame weighs three ounces). Outside the tent on the back are two mesh pockets that hold the Sitlite foam pad. The pad is 10.75 inches by 20 inches and weighs 2.1 ounces. It can be removed to use as a sit pad during breaks and as an extension to a three-quarter length sleeping pad in the tent.

On the outside, there are several loops on the shoulder straps to affix things. On the front, there are six tiny loops along the sides. On the bottom are two trekking pole D-rings and one large ice axe loop. Trekking poles can be slipped between the lid and pack with the tips inserted in the D-rings. The blade of the ice axe can slide through the large loop at the bottom with the handle secured with the clip on top. There are no straps with which to secure a pad at the bottom, but something could be retrofitted using the existing loops and some cord. 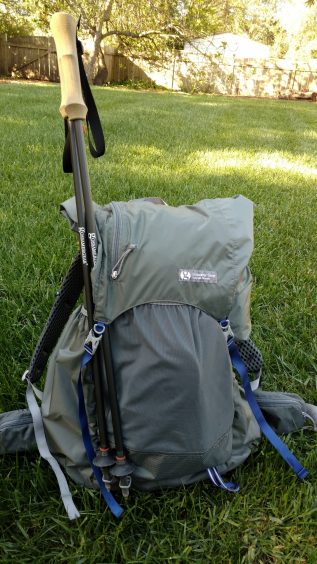 On the inaugural trip, I hiked 5.5 miles along the coast on a beautiful clear day with temperatures in the 60s and a steady offshore breeze. The pack probably weighed around 20 pounds for the overnight trip. I placed my sleeping bag in first, then the rolled up inflatable pad. My tent, which has short poles, went in horizontally on top of that. A stuff sack with clothing went in next. On the top was my food bag. I packed a large fuel canister in the long side pocket with the Jet Boil stove on top with a small fuel canister. I was guiding a group and had offered to boil water so I brought extra fuel. I kept switching items in and out of the large side pocket because several items, including the tent, pad and stove seemed like a perfect fit. Ultimately, I tried it as described above. My one-liter water bottle went in the lower side pocket with my pack cover and toilet kit in the upper pocket. My jacket and camp shoes went in the large mesh pocket.

The pack was so comfortable right off the bat that I made hardly any adjustments, save cinching up the hip belt and chest strap. I was able to retrieve the water bottle independently. Getting it back in required just the right angle to catch the edge of the pocket before pushing down but I eventually mastered it. The large, long zipper on the lid pocket made it very easy to rummage around for small items. The zippers on the hip belt pockets opened and closed smoothly as I removed my phone multiple times to take photos. The long collar didn’t bother me since I didn’t need to get into the pack until I was ready to set up camp. I always keep lunch and snacks easily available, separate from my main food bag or can. The mesh pocket was great because my jacket was on and off several times. On the return trip there was no breeze and I noticed that the foam pad made my back feel a little warm. One thing I really like about the pack is that it doesn’t come up too high behind my head. In fact, on this trip, the pack didn’t rise above my shoulders.

The Mariposa carried my light load beautifully and I had no complaints at the end of the trip. The true test will come in a couple of months when I take a full bear can to Yosemite for five days. I will update this review after that trip.

UPDATE 1: It’s now a year later and the Mariposa continues to perform very well. I’ve been on several trips where I had to carry a bear can and both my 650 L Garcia Backpacker’s Cache  and Bearikade Scout fit easily in the pack. For the Garcia, I place it vertically to one side and arrange my hydration bladder or water bottles on the other side to balance out the weight. The Scout is so small that it can fit vertically or horizontally. I can fit my tent, stove, sleeping bag, pad, and clothing in the pack with no problems and still don’t use the extra space in the collar. Sometimes I put the tent in the long side sleeve while other times I put my stove and fuel there. This is now my go-to pack and I prefer it to my Z-Packs Arc Zip as it carries loads better for me with equivalent amount of gear.

UPDATE 2: I was leading a group trip where a woman wasn’t feeling well as we ascended a steep ridge. I had her open her pack and I grabbed everything I could, including her JetBoil stove and bag of clothing, to put in my pack.  I filled up the whole collar that I don’t normally use and barely felt the extra weight. This made a huge difference for her and she was able to complete the hike. This was a good test for the Mariposa to be able to carry much more than I normally would, in addition to my Bearikade Scout food canister. This is also one of the reasons I chose the Mariposa over the Gorilla. The Gorilla would probably be fine for me but it’s these times when I’m guiding when I need to be able to carry some extra first aid supplies and take on some gear for another person that I chose the larger pack. I was quite pleased with the performance of the pack in these circumstances. Also, now that I have the Gossamer Gear The One tent, I store the tent in the long side pocket. It fits perfectly and because it uses trekking poles for support, it’s mostly soft and squishy (except for the tent stakes).

The Mariposa is well-designed and well-crafted. It has been around for many years and has been updated over time. It strikes a good balance between weight, structure, convenience and load-carrying ability. With the long collar, it can be compact enough for small loads or flexible enough to carry the occasional large load. With a light load, it’s very comfortable. I’m looking forward to further testing. 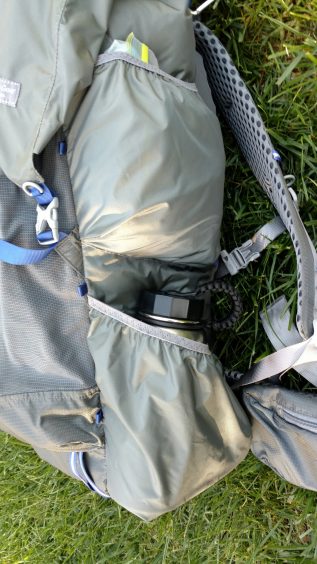 Two pockets on one side; the lower holds my one-liter water bottle. 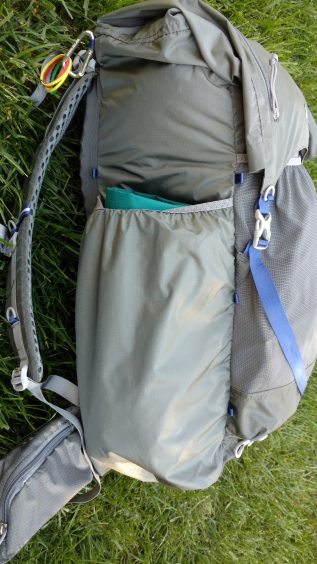 One pocket on the other side holds my inflatable pad (or stove or tent). 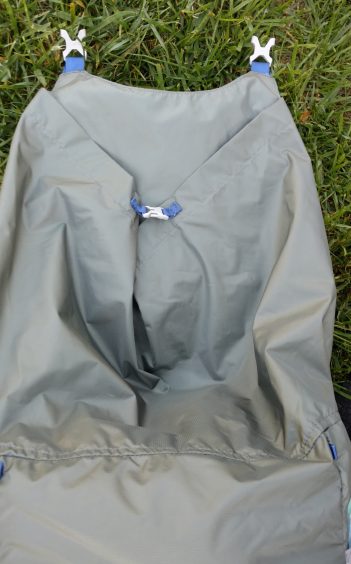 The collar extends a full foot and uses two small clips to gather the edges together before closing. 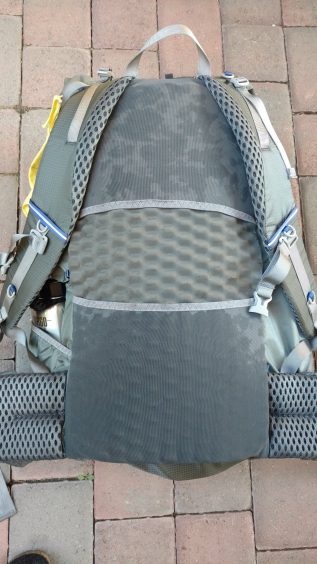 Sitlite foam pad in mesh sleeves in back. 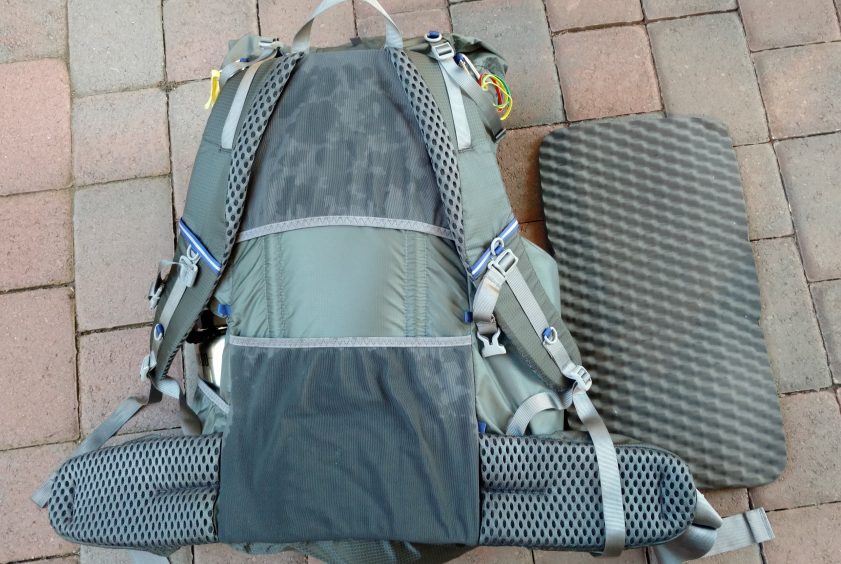 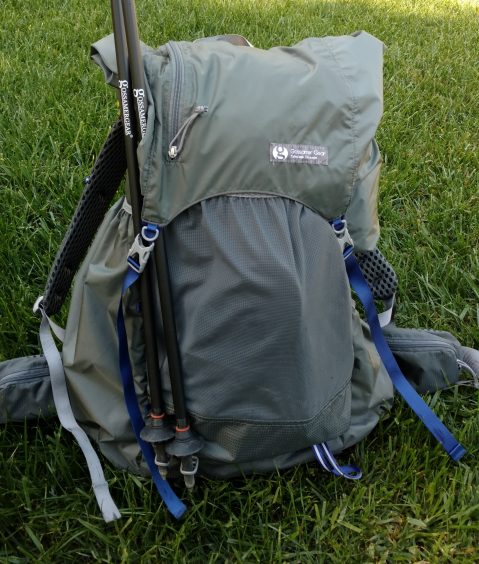 Tahoe to Sonora Pass on the PCT: Daily Trip Report

Sonora Pass to Yosemite on the PCT: Daily Trip Report